A Look at Global Financial Regulation 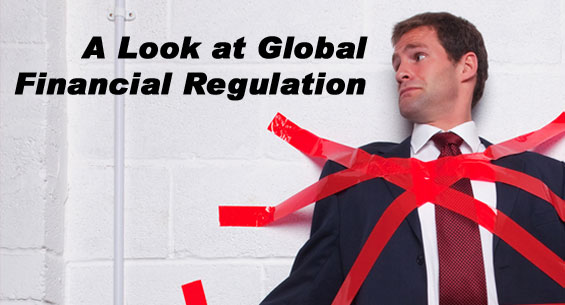 The fundamental principle of free market economies is that supply and demand (rather than governments) determine market prices, actions and outcomes. In an emotion-free and ethical world, this principle would create highly efficient, safe, and stable markets.

In reality, actors participating in the financial theatre may have objectives which are misaligned with the rest of the market, and may therefore undertake actions which (aside from potentially being criminal) could cause a loss of confidence in the market or even disrupt its very stability. It is these outcomes which financial regulators around the world aim to prevent with increasingly complex rules. As the Economist noted, “…..The first set of Basel rules on bank capital was just 30 pages long; the second go had 347 pages; Basel 3 has 616. In America the Glass-Steagall act of 1933, which separated commercial and investment banking, was a concise 37 pages; the Dodd-Frank act of 2010 ran to 848, and may spawn a further 30,000 pages of detailed rule-making by various agencies…..”

The global financial crisis which began in 2007 (and incidents such as the Madoff investment scandal) revealed huge failings in domestic and international regulatory policy- meaning that many participants and stakeholders in the financial markets felt these (largely unelected) regulators simply weren’t doing their job. In the fall-out, accusations have been raised of regulations being “unhelpfully tough” and of regulators exceeding their remit.

To learn more about the state and future of financial regulation, I spoke to Julian Korek (Founding Member) and Jonathan Saxton (Member) of Kinetic Partners– a leading provider of tailored consulting, advisory and assurance services to clients within the asset management, investment banking and broking industries. Established in 2005, Kinetic currently advise over 1,200 clients across eight global offices in London, Dublin, New York, Grand Cayman, Geneva, Hong Kong, Luxembourg and the Channel Islands.

Q: What is the sentiment of the global financial services industry towards regulation?

[Julian Korek] Our recent survey showed that less than half of people thought that regulatory responses in the US and UK would make the financial services industry more stable. The majority felt that it would have little or no impact on stability. This is worrying… We had the Dodd-Frank act and then a knee-jerk reaction from Europe in the form of AFMD. They are hefty pieces of regulation that will cost a huge amount of money- not just to drive the regulation and legal framework- but also to implement. After all this time, you would expect a more positive view from the industry… However, they look to fix this through financial services marketing and other types of resources.

Why is that? I think there’s a feeling that regulation hasn’t hit the causation and also- perhaps- a loss of clarity around what the regulatory agenda is through a lack of communication between regulators and the industry. For a framework to be effective, greater clarity will be required. Rather than trying to hit certain sectors of the industry such as hedge-funds, are there much more important factors such as governance and structural issues which should have been dealt with sooner?

[Jonathan Saxton] In the US, there’s been a lot of scepticism toward the regulator. This has been brought about by instances such as Madoff (who was visited by the SEC several times). There’s definitely a sense that regulators don’t understand how firms operate and the practicalities of what they do- and hence that regulations won’t help resolve the issues, such as governance issues, that are there. The motivation of people globally to put time and resource into compliance is increasing- a lot of this is self-regulating. Due to scandals such as Madoff, investors are much more rigorous now around due-diligence. A big part of this is making sure that firms have sound compliance controls- in fact, compliance has become a marketing tool for many. So, there’s scepticism towards the regulators but there’s no lack of motivation to comply with the rules.

[Julian Korek] There are a couple of key things that are required. The financial services industry is global and requires global standards to avoid regulatory-arbitrage. There has to be some consensus in terms of whether you end up with a rules-based or principles-based regime.

Following the crisis, nobody actually pinpointed its cause and hence where the deficiencies were. There were knee-jerk reactions to say hedge-funds caused it with leverage, they’re bad and must be regulated…. but nobody looked at the fact that the market created a load of products that nobody understood, and then failed to manage them properly. There was huge vested interest by ratings agencies, and most of the customers of these products didn’t understand what they were buying.

The whole point of regulatory change was to bolster-up the reputation of the industry, and the levels of trust people have towards it. What we’ve ended up with is not quite the solution people would have hoped for…

We need a more joined up approach- particularly between Europe and the US- and better dialogue with the industry. There’s a huge reluctance from industry to challenge regulation if they think it’s poor, inadequate or not fit for purpose. They feel they are often then scapegoat. This is a dangerous position, you need to have dialogue.

[Jonathan Saxton] The global element is absolutely key. If you start imposing rules that are too restrictive in one jurisdiction, it will lose out. We’ve seen a lot of initiatives in various jurisdictions, without a joined-up approach bringing it all together. In Europe you see a lot of capital adequacy rules imposed on firms, but we have nothing like that in the US.

Q: What should be the relationship of the financial service industry with its regulators?

[Johnathan] To be fair, regulators on both sides of the Atlantic do have consultation periods with the industry- but they often go below the radar, and many feel reluctant to get involved, fearing it could adversely affect their relationship with the regulator….

Q: Do you feel that regulators are aware of the sources of risk in the marketplace?

[Julian] The key danger is that regulators try to remove all the risk from the marketplace- this cannot be the case. There has to be risk in all these products, and if they try to remove them too much, they’ll create vanilla products that simply cannot deliver. Regulators have to understand what the risks are they are trying to remove from the industry by having dialogue with all the stakeholders in the industry- participants, trade-bodies, user-groups and more. This will create a more effective and sensible framework.

Removing all market risks is not the job of the regulator. They are there to create an orderly market, protected from systemic risks that could take out a big chunk of the market. They are also there to stop crooks like Madoff from participating. The knee-jerk reactions have shown they’ve lost sight of what they do.

[Johnathan] You tend to find that regulators are more reactive than proactive. After an issue, they will regulate the area to death after the incident occurs. With more industry-knowledge, they could better understand what the risks would be going-forward.

You can’t stop risks completely, that’s the whole point of a free market.

Q: Do you feel that regulators understand the process implications they have on the industry?

[Julian] What we’re seeing from the industry is that firms have to spend a lot of money- particularly on technology- to meet the incredibly complex regulatory requirements they are set. We’re also seeing extra-territorialism whereby regulators look at anyone who hits their market (not just firms based in their jurisdiction) and cuts across short-selling or other rules, adding another layer of complexity as firms now need additional systems and compliance to warn about holdings or actions in markets. In very real terms, it is adversely impacting investment.

This leads us back to the question about whether regulations are being promulgated by people who understand the sectors of the industry they are regulating!

Q: Is there a disconnect between business-leaders and the regulators?

[Julian] Most compliance desks look at single jurisdictions and understand the local impacts of regulations and how it affects stability. Most CEO’s have to have a broader view- taking into account governance, risk, etc. Taking all factors together, they may feel that regulations may not increase stability. CEO’s also haven’t often been engaged in dialogue with regulators, it’s often left to the compliance community.

Former IMF Chief Economist Kenneth Rogoff wrote in 2012 that, “…. Legislation and regulation produced in the wake of the crisis have mostly served as a patch to preserve the status quo. Politicians and regulators have neither the political courage nor the intellectual conviction needed to return to a much clearer and more straightforward system….”

Pparticipants in the financial market have often failed to maintain an open dialogue with regulators and supervisors for fear of repercussions and of damaging their own position in the market. Regulators themselves have not helped this with their often aggressive attitude toward the financial services industry.

There is no doubt that change is needed. Not only do domestic regulations need to be more reflective of the structure of financial markets and the instruments within them, but they need to be co-ordinated globally to support how markets interact. More than anything, this needs to start with something fatally lacking in current regimes- dialogue.

A Conversation with Harvard Professor, Ranjay Gulati, on Deep Purpose: The Heart and Soul of High-Performance Companies.

A Conversation with Renzo Rosso, Founder & Chairman of OTB Group, Founder of Diesel and Philanthropist.

A Conversation with Tim Leberecht on Making Business Beautiful.

Up Next: The Risks and Opportunities of Unforeseen ‘Black swan’ Market Events