A Conversation with Afua Hirsch on Race, Identity & Empire 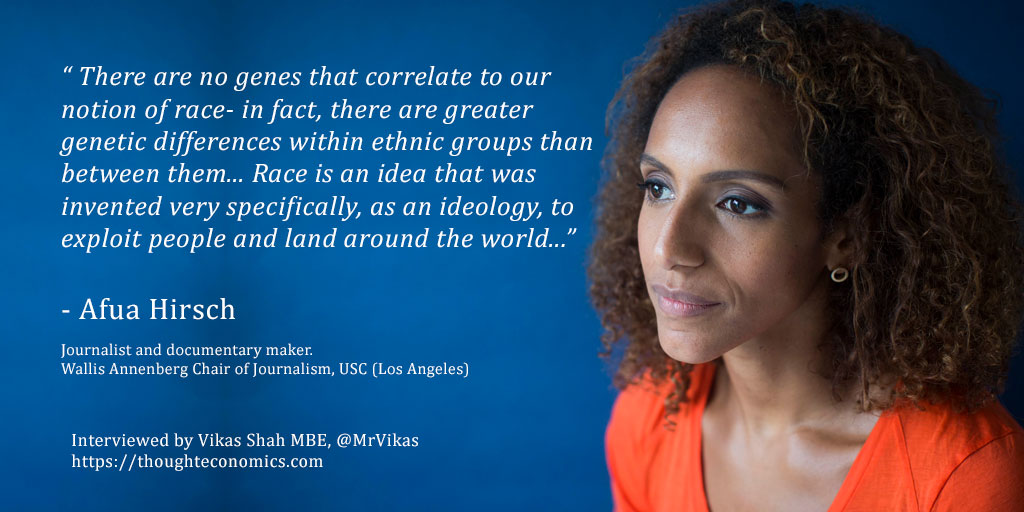 Afua Hirsch is a former barrister, journalist and documentary maker. Her current projects include a 6-part series with Samuel L Jackson, a major BBC series about African art, and another about whiteness and an Audible original series We Need to Talk About The British Empire. She regularly writes, reports and speaks on international current affairs, and has published two bestselling books, Brit(ish): On Race, Identity and Belonging, winner of the Royal Society of Literature Jerwood Prize, and Equal To Everything, about the UK Supreme Court. Afua was a judge on last year’s Booker Prize and is currently the Wallis Annenberg Chair of Journalism at the University of Southern California in Los Angeles.

In this exclusive interview, I spoke to Afua Hirsch on race, identity and empire.

Q:  How has the history of colonialism and empire shaped race in the UK today?

[Afua Hirsch]: Britain’s imperial history lasted hundreds of years and happened to be the period in history where we industrialized, globalized, and became the modern nation that we see today. At no point in that 400-500 years did Britain say ‘we now fully reject this ideology and want to dismantle it…’ on the contrary, Britain still continues to celebrate its’ imperialist past and erases the sacrifice, labour and lives of people from the Empire who allowed it to become the nation it is. Britain refuses to engage with the full picture of its’ own history, and so it’s never been rejected, nor ceased to be relevant. The continuity of colonialism and empire lives through our arts, humanities, music, institutions, foundations, literature, science and industries; many of whom have roots in the transatlantic slave trade.

There is a cognitive dissonance that attempts to cast this as being history of the ancient past, or a niche topic that is discussed during Black History Month. Empire is not black history, it is British history and informs the history of whiteness and how white identities were constructed as normal, civilized, aspirational – relegating everyone else to some kind of otherness. Just look at the contemporary language we use around diversity with phrases such as ‘people of colour…’ ‘BAME….’ These phrases are meaningless they are not a cultural identity, nobody identifies themselves as BAME. These phrases continue to centre whiteness as being the normal, visible, neutral identity- meaning that all those ‘other’ people who are black or brown are in some other group, with their own label.

People who are physically racialized as the other don’t have the luxury of ignoring their link to Empire, but the white British majority have been able to construct their lives in such a way as to not engage with it at all. There is more engagement and learning; but most people simply aren’t engaging- though I hope we will see a change- and that we start to move away from the complacent understanding of the basics of who we are as a nation.

Q:  Why are institutions slow/reluctant to respond to racism?

[Afua Hirsch]: As someone who talks to corporations, organizations, government departments and institutions; it’s fascinating for me to go-in and talk about blackness, and see black people looking secretly thrilled whilst the rest of the room looks terrified like you have spoken a taboo. It’s important that we feel uncomfortable, those feelings lead to a realm of honesty that people have been avoiding- just look at the list of companies that have said they want to acknowledge their history in the slave trade and who realise that this is not a BAME issue but one that specifically affects people of Afro-Caribbean heritage.

Q:  Why has race become weaponized in recent years?

[Afua Hirsch]: When you air a set of historically agreed facts, that people are not used to hearing, it disrupts their comfort zone and notion that Britain has always been on the right side of history. It makes people hostile and aggressive.

I am a British person, despite the number of people use tropes like if I don’t like it here… I should leave… There are still many people who don’t accept that you can look like me and still be British, irrespective of how many generations of you or your family have been in the country. There is a powerful subconscious narrative that a British identity is a white identity and that any people who claim it who aren’t white, are pretenders. The legitimacy of other groups to claim the identity of Britishness is almost centred around the conditionality of ‘good behaviour’ and towing the line of keeping your eyes closed about reality. It is deeply unhealthy to have a national identity so fragile, that it cannot stand-up to historical facts.

Britain has this sense of necessity to be the best at everything; we’ve seen this manifest in the COVID pandemic where we project to being the best dealing with it- even though we’re clearly one of the worst performing countries when it comes to protecting citizens and health-workers. Don’t’ get me wrong- you can have incompetent governments in any country- but what’s different about Britain is this constant need to say, ‘and by the way, we’re the best at everything…’ it’s a hang-over from the traditions created after World Wars where Britain claimed moral victory following the defeat of the Nazis- a time where Empire was disintegrating, and Britain needed a new source of ‘greatness.’ Anything that contradicts this moral victory disrupts people’s sense of patriotism so much that they would rather attack the person presenting the facts than have a real, honest conversation. It’s the kind of thing you expect from a dictatorship, not from a country that prides itself on intellectual curiosity.

If Britain wants to be a sophisticated nation in its ability to interact with other nations on a world-scale… if we want to be a successful, multi-cultural society, the fact that we cannot cope with our own history is unsustainable. History is pushed as a celebratory subject in Britain and that precludes any honest relationship with the reality of our history- and that precludes people from learning that many of the brown and black people in Britain were born in the British Empire, they have the right to be here, and were often the labour that rebuilt Britain. That ignorance is depriving British people of the basic understanding of their own country- and that, to me, is an utter failure of our leadership.

Q:  How can we move the needle forward on racism?

[Afua Hirsch]: We don’t need any more reviews, committees or policy papers, people are feeling hurt and we need more concrete action. Racist ideas are deeply rooted in British society, and because this is never discussed or taught, it’s difficult for people to understand it- even when it’s in plain sight.

You can be well-intentioned but racist… you can be racist through being complicit in something that is structured to give privilege to people who are white or approximate themselves to whiteness…. The failure of people to understand what racism is has perpetuated racist ideas and allowed people to benefit from a system without doing any introspection about why.

I’m an optimistic person by nature- and I do believe that if you equip people with the understanding of how this works, they will start to behave differently. That’s what’s happening right now; it’s the first time in my life I’ve seen conversations about structural racism and the role of white people in racism becoming mainstream. It’s the first time I’ve seen so many open conversations about white privilege, the importance of allyship, and the history and systems of racism.

It’s no coincidence that racism appears in a nation that is not educated, conditioned or equipped to dismantle centuries of racist ideologies. When, in the history of Britain, were people supposed to magically stop being racist? We have to do the work… and critically white people have to do the work too… in my lifetime, I’ve certainly felt the pushback that this is a problem for ‘us’ to deal with – it’s not – it’s the responsibility of every single person in society. If you want to live in a society where opportunity and outcomes are not distributed by race, you have to actively work to dismantle those structures, and that is everyone’s job.

Up Next: Mental Health