A Conversation with AJ Mendez 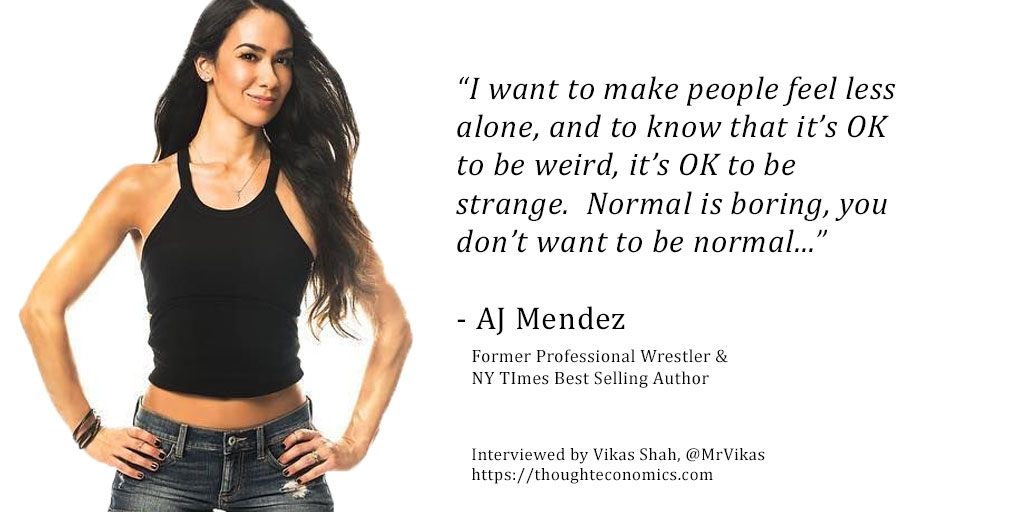 I remember the story of a man, born in a small village in Serbia, a place with a population of just 400 people.  The fourth of five children, he contracted cholera as a child- became bedridden for nine months (almost dying).  The life that followed was one of challenge and resilience.  He severed ties with his family, suffered nervous breakdown and addictions, spent much of his time travelling from place to place, and eventually through his sheer talent and determination he built a career in engineering which took him to Paris and eventually New York.

For many years, he lived in room 3327 on the 33rd floor of the New Yorker Hotel.  On his walks in the park, he used to find ailing pigeons, bringing them back to his hotel room to nurse them back to health.  Of one bird in particular he wrote, “I loved that pigeon as a man loves a woman, and she loved me. As long as I had her, there was a purpose to my life.”

You may read this tale and think of this man as crazy, but this is the real-life story of Nikola Tesla; the genius inventor, engineer and futurist to whom we can credit much of the research that brought us power and communications.

It’s rare to hear the story of any life of significance without seeing the shared arcs of unlikely beginnings, unusual lives, and surprising successes.

AJ Mendez (twitter @TheAJMendez) is no exception.  The youngest of three children, she grew-up in a family fighting poverty, mental illness and addiction, an environment without stability which would cause many to write her off.  In the ultimate act of rebellion against expectation, AJ went on to build a career as one of the world’s best professional wrestlers (under the ring name AJ Lee) before becoming a New York Times Bestselling author with her book Crazy Is My Superpower: How I Triumphed by Breaking Bones, Breaking Hearts, and Breaking the Rules.  She is an advocate an ambassador for causes ranging from animal rights to mental health, and has built a hugely successful life, arguably against the odds.

I spoke to AJ to learn how she’s turned ‘Crazy’ into her superpower.

Q: How did you form your sense of identity?

[AJ Mendez]: I’m a firm believer that creativity comes from restrictions, so I’m really grateful that I grew-up with so many restrictions around me.  I never heard, ‘hey, you can do this!’ it was always, ‘you can’t do this!’ or ‘you can’t act like that…’ or ‘you can’t say these things…’ or even ‘we can’t afford this….’ It was just always no.

When you give someone complete freedom and a blank canvas, it could take forever to figure out what you want to do, but when you give people limitations and say, ‘here’s a canvas, but you can only paint with yellow..’ – the wheels start turning, and you plan to get out of the box you’re put in…

Early on, being told no helped me figure out what I wanted my yes’s to be.  I learned who I wanted to be from people telling me who I could not be.

I remember seeing these characters in comic books and video-games, seeing pieces of myself in all of them, and pieces of who I wanted to be.  They were strong and I felt nothing but weak.  To me, it was the only place I saw women reflected as mighty, as kick-ass, as powerful.  It’s not something I saw in real-life, and I didn’t know people like that.  I was just this little kid who felt weak and incapable, and this was a way of finding strength, to see it in those characters.

Q:  How did your identity lead you into wrestling?

[AJ Mendez]: For me, wrestling felt like running away with the circus, and I really connected to that.  It felt like a place for outcasts, where you could be celebrated for being strange.  But also, I had such love for these superhero women, and this was the closest I could find to becoming that real-life superhero- putting on the spandex and fighting bad guys in the ring.  I felt free, it was like playing dress-up.

Q:  What did you learn about life from a career in wrestling?

[AJ Mendez]: This may sound a little like the after school special… like, ‘drink your milk kids!’ but the most important lesson I learned is that you have to show 100% genuine emotion and personality through everything you do and allow that to connect to people.  You cannot keep things inside because you think people won’t accept you, or will think you’re strange; just let your freak flag fly.

I was the tomboy in a world where people were pushing me to become this ultra-feminine sexpot bombshell… and that’s not me!  Every single point of authority told me to follow the formula to be what was expected and not walk outside it, but I listened to my gut and decided to be genuine, to be me.

Q:  How did your role as a celebrity shape your relationship with social media?

[AJ Mendez]: I was really lucky to grow-up at a time before social media existed.  Today’s children never knew a world before it, for them- social media is the only way to exist and connect, and that frightens me.

Knowing a world without social media and learning about it as my career took-off actually helped me to disassociate from it and go, ‘okay, this is part of a character and people are interested in the show… and this is my way of connecting with people, it’s part of the fun, and part of the show…’ – I made sure it wasn’t too behind-the-scenes, and kept a little bit of distance from it.

It’s important though, to be vulnerable, honest and true in the way that you can- and in the way you can help people.

If people are listening to you, you’d better say something worthwhile.  I don’t waste people’s time and attention by giving my every thought, opinion and view through social media.  I don’t curse people out or start wars, I just want to connect in a healthy way with people and in a way that keeps my public and personal life separated.

Q: How did advocacy come into your life?

I’ve always been very outspoken, and have strong opinions.  If I need to say something, I’ll say it.  If I feel I can help people I will, and I will stand-up for what I believe in, even if I have to stand alone.

My journey started as a feminist in a world that didn’t welcome that, and it evolved into fighting for animal rights, campaigning against dog-fighting and promoting animal rescue.  When I retired from wrestling and started writing my memoir, I became a mental health advocate almost by accident; I didn’t realise how much it had shaped my journey, but I realised that if I want to help people, if I want my life to matter, I have to be honest and show people that you can overcome something that most people would consider a death sentence.  I had to show people that you can live a fulfulling life with a mental health disorder and that the taboo was wrong.  This has honestly been some of the most fulfilling work of my life.

Sometimes when you’re going through things in life, you can feel so alone… or feel like you’re not handling it right… but we don’t change the world through opinions, we change it with examples.  So I’ve been putting myself out there, reaching out and connecting- and you know what, I’ve had a huge amount of people coming forward telling me their own mental health journey; they’ve shared a secret with me that they may have kept for years.  We need to speak-up… there’s still such a stigma around mental health issues, and we need to talk more and shatter it.

A lot of people assume that I would choose not to have bipolar disorder; but I’m grateful for it.  I wouldn’t trade it for anything in the world, because I feel like all the ups and downs have formed who I am, and made be braver, tougher… more creative and more capable.

I want to make people feel less alone, and to know that it’s OK to be weird, it’s OK to be strange.  Normal is boring, you don’t want to be normal…….

Q:  How can we turn our vulnerabilities into superpowers?

[AJ Mendez]: 100% of anything I have ever felt uncomfortable about, embarrassed about or tried to hide…. When I embraced those things and flipped the script…. I felt freer, happier and more capable.

I’m a 5’2, 100lb poor chick from New Jersey, I’m not the superhero stereotype but guess what- I could be a different person in wrestling… I was the outlier, and that became my strength.

In everyday life, I was scared of my bipolar disorder, but I realised that it made me more passionate, confident and beautifully delusional in my capabilities sometimes; that got me a long way.

You have to love the things about you that others may not and embrace those traits.  That’s how you get doors to open for you.

Up Next: A Conversation with Chip Wilson, Founder of lululemon athletica