How Close Did We Come to Financial Meltdown 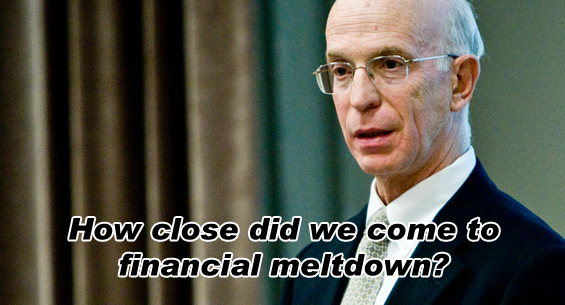 Vikas Shah interviews Alan S. Blinder (the Gordon S. Rentschler Memorial Professor of Economics and Public Affairs at Princeton University) who served as Vice Chairman of the Board of Governors of the Federal Reserve System from June 1994 until January 1996. In this position, he represented the Fed at various international meetings, and was a member of the Board’s committees on Bank Supervision and Regulation, Consumer and Community Affairs, and Derivative Instruments. Before becoming a member of the Board, Dr. Blinder served as a Member of President Clinton’s original Council of Economic Advisers from January 1993 until June 1994.

Q: How close did the global financial system come to a meltdown?

[Prof. Blinder] This is the equivalent of asking how close we came to falling through a big crack in the Earth when it didn’t actually happen.

However… going on eyewitness accounts from very informed and non-hysterical observers such as Fed Chairman Ben Bernanke and others, it looks like we were quite close.   When people start talking seriously about some of the biggest banks in the world folding? …That says you’re pretty close to a meltdown.

Q: Were there any latent threats or weaknesses in the financial system that contributed to the crisis emerging?

[Prof. Blinder] The two most obvious things were the excessive degrees of leverage almost everywhere in the financial system and a fixed-income bubble.

You had risk spreads on sub-prime mortgages, on junk bonds and developing country debt at ludicrously low levels.  For a while during the period leading up to the crisis, spreads between Greek and German sovereign debt got to about 20 basis points!

Q: To what extent did senior decision makers on the ‘inside’ see this coming?

[Prof. Blinder] Many decision makers saw ‘it’ coming- albeit some place vaguely in the distance but most felt, “…not now and not to me”.

There’s a disease shared between individuals who consider themselves the smartest people in the room that makes them think they’ll be the ones that get out just in time, while others are left holding the bag.  That was true for a few people, but in general… someone will always be left holding the bag.

Q: Do your views on the collapse of Bear Sterns & Lehman Bros vary from conventional wisdom, and what tangible things have been done to prevent another collapse of this scale?

[Prof. Blinder] It’s hard to know what the conventional wisdom is on both Bear and Lehman.  You still have people debating whether the US Government should have stepped in and saved these firms from oblivion. For my mind, I think it was a grave error to let Lehman go under.

Bear and Lehman were firms who were playing very close to the edge.  They were highly levered and relied (to an irresponsible extent) on short-term overnight financing.  That’s the kind of financing that can disappear in days…

Q: How effective were measures like TARP, and were there any realistic alternatives?

[Prof. Blinder]  The crisis left a gigantic hole- like a neutron bomb went off in the financial system.  After the Lehman failure, we had a collapse of aggregate demand and even though the stimulus of $787 billion sounds like a lot of money- which it is- it only amounted to 5% of GDP, spread over three years.  That’s was never going to fill the hole left by frightened investors and consumers who weren’t spending, but it helped a lot.

One of the many sad legacies about this episode is the bad name given to fiscal stimulus and TARP.  You can’t even use those terms in the United States any more without thinking of a euphemism.  People still think these measures cost American taxpayers a huge amount of money and did no good.  The facts are exactly the reverse.  The government turned a profit on the financial market aspects of TARP- a profit!

Q: Are there still aftershocks yet to come in the market?

[Prof. Blinder] One of the aftershocks commonly discussed is the foreclosure tsunami- it hasn’t passed, but has crested and is receding.  It was a tragedy as it was so easy to forecast.  I’m not just saying this with the wisdom of hindsight- many people did forecast it.   It didn’t require a great deal of insight to see millions of foreclosures coming, and unfortunately we did very little to stop them.

There are some worries about risk spreads getting quite low.  We’re not living in the world of 2005/6 for sure, but some of these risk spreads on junk bonds for example- do seem to be getting low.  On the plus side however, we find a financial system now which is vastly less leveraged than the eve of the panic.

Q: Did the crisis reveal anything about the true nature of our economy?

[Prof. Blinder] One of the themes which is perhaps more important in the intellectual rather than practical world was the excessive love affair that people in the financial world had with the efficient markets hypothesis.  I mean the strong version that said- unequivocally- that market prices are correct given information that is known at the time.  If you take that literally, there can’t be bubbles.  Markets can go up and down as new information comes into the system, but there can’t be bubbles as pricing is always correct.  Who can believe that now? …Apparently some people do…

There are also a couple of other difficult problems.  One is the information advantage that insiders have over outsiders.  There are bans on insider trading, but it’s a tough concept to define.   People who are deeply in the markets will always know more about what’s going on than people who aren’t.  There’s nothing wrong with that- it’s the nature of the beast and is true in any business.  People in the chemical industry know more about their industry than others.  There’s nothing pernicious about it, it’s inevitable.  It’s impossible to cure, but we can take some steps.   I feel we can push a lot of derivatives trading (where there is still an element of mystery) into standardisation and marketplaces with transparent pricing, competition and so on.  This would be far better than the dark-world of OTC derivatives where only a handful of insiders know where the market really is.

Q: Within our generation, will we face another crisis of this magnitude?

[Prof. Blinder] If you mean magnitude of crisis in the literal sense of comparing it against the one which occurred? I think it’s very, very unlikely.  This was the hundred-year flood.

If you stopped before that phrase and just asked whether we would face another crisis in the financial markets within our generation? Then I’d bet the ranch on that.  Markets have an incredible capacity to forget, so who knows if it will stay like that… but we have done some permanent things such as Dodd-Frank and the Basel accords.  I think it’s a crying shame that those measures are delayed until 2019, but most American banks are already in compliance with those standards.

Markets forget, they get over-leveraged, they extend themselves, we will see other bubbles.

Q: Are there any urgent measures that need to be taken to shore-up financial markets, and are there any elephants in the room which are being ignored?

[Prof. Blinder] Firstly, derivatives trading is a big risk as it happens outside the view of organised markets.  Secondly we have yet to reform the way rating agencies are compensated for their work.  They were- and still are- paid by the issuers of securities.  That’s just looking for trouble.  Thirdly, in the years leading up to the crisis we also had crazy compensation systems.  What I mean by that is compensation systems- especially for traders- that created go for broke incentives.   If you won big, you became fabulously wealthy- and if you lost big- you got a comparative slap across the wrist.  There’s been some movement on this, but I think it’s still- sadly- the norm.

Q: What advice would you give to investors working with a long-term horizon (such as sovereign wealth funds, pension funds, etc)?

[Prof. Blinder] It’s easy to give advice, but hard to follow…

I would start by advising them not to get to leveraged.  There’s a tendency- if you think something is a good thing- to buy it on margin 2:1, 5:1 and so on.  This is dangerous.  I would also watch the leverage of the other financial institutions you are dealing with.  Thirdly, I would suggest being very sceptical of financial advice- as you never really know in whose interest that advice is given.  I’d like to think that advice is given with the investor’s best interests at heart, but unfortunately it’s often the seller who drives it.

The easiest piece of advice to give, but the hardest to follow- is to not let yourself get swept up in the next bubble.  You could have said that about tech stocks in the 90’s, housing prices around the world in the early 2000’s… but people always got swept up in them.  The history of financial bubbles does not give cause for optimism.

Q: Are there opportunities for real growth in the market?

[Prof. Blinder] There are always opportunities.

There will be sectors of the economy that experience fantastic growth and opportunity in coming years.  Some of that may be led by information technology, nanotech or biotech… but it’s impossible to know.  If it was possible to know these things, everyone would pile into the soon-to-be-profitable sectors, and nobody would lose money.

I’m not a growth pessimist in the long term.

Q: Do you think the generation after ours will have learnt lessons from this crisis, and will they repeat the same mistakes again?

The people who were around on the trading desks in September 2008 and thereafter will never forget the near-death experience the markets had.  Some of them were young and will be around for a while, and some of them were old and may be retiring soon.

I worry more about the younger generations that didn’t experience it first hand and are reading about the crisis in history books.  There’s a tendency for them to say, “oh, those were the old foolish people and we’ll never make the same mistakes they did…”  Taking that attitude is a big mistake…

Up Next: A Conversation with Ousman Umar on His Incredible True Story of Surviving a Five Year Journey From His Home in Ghana, to Europe in Search of a Better Life.