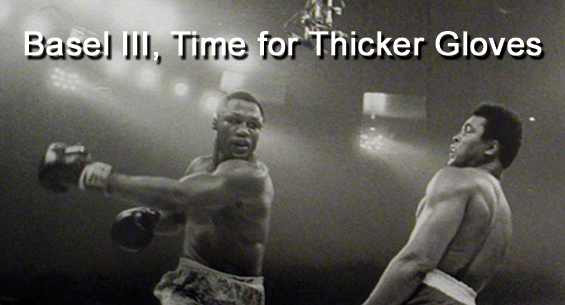 As the Economist reported, “On September 12th the Basel Committee, a club of supervisors and bank regulators, finally reached agreement on how much extra stuffing needs to go into the cushions [of banks] to absorb losses and buffer the financial system against the next crisis.”

The “Basel III” recommendations set out the revised global minimum capital requirements for banks.  As Felix Salmon (Reuters) analyses, “Possibly the most important thing here is the existence of the first column, setting minimum standards for common equity — which is also known as core Tier 1 capital. Such standards did exist in the past, but they were set extremely low, at just 2%, and so were generally ignored. As of now, common equity is the main thing that matters. No more throwing any old garbage into the Tier 1 bucket and calling it capital: the new standards for common equity are significantly tougher than the old standards for Tier 1 capital in total. The absolute bare minimum for core Tier 1 capital is 4.5%, and the new minimum for Tier 1 capital in general has now been raised to 6%. The minimum for Tier 2 remains at 8%. But that’s just the beginning. On top of that there’s a “conservation buffer” of another 2.5 percentage points; to a first approximation, any bank you’ve heard of is going to want to be well outside that buffer, because they won’t be able to pay dividends if they don’t have the full buffer in place.  When credit in an economy is growing faster than the economy itself, a countercyclical capital buffer  kicks in, which essentially says that banks need to have more capital in good times. That countercyclical buffer won’t be set by the BIS in Basel; it’ll be left up to national regulators. But you can probably expect the UK, US, and Switzerland to enforce it up to the maximum of 2.5%. So when the economy’s booming, banks are going to need 9.5% common equity, 11% Tier 1 capital, and 13% Tier 2 capital.”  The Basel Committee’s official release also states, “Systemically important banks should have loss absorbing capacity beyond the standards announced today and work continues on this issue in the Financial Stability Board and relevant Basel Committee work streams.”

The Basel Club have (finally) addressed a number of key points which analysts had always noted as lacking in capital regulation.

Tier 1 Capital Definition:
In general, banks will no longer be able to include ‘junk’ items as Tier 1 capital (such as notional values of profits on debt instruments, notional values of derivatives, and so forth) and will have to allocate real equity and cash to this pool.  Already though, many banks are arguing that the new breed of “Hybrid Equity” instruments (as used by LLoyds) should be classed as Tier1.  These are (typically) bond instruments (also known as Contingent Capital – CoCo’s) which convert into equity under certain conditions, and should (in theory) shield the institution and holder from volatility in the market.  Lloyd’s CoCo’s, for example, are designed to convert into equity immediately if their core Tier 1 capital ratio falls below 5 percent.  Basel Club have yet to formalise their position on this.

Perceived Counterparty Risk:
As we have observed in a previous article, psychology plays an important role in market efficiency.  At the start of our (most recent) recession- we had a precipitous collapse in markets, driven by an almost instant removal of liquidity in the market as counterparties simply saw each other as too risky.  These new regulations should (in theory, although there is no research to test it) prevent this psychological risk aversion by ensuring that all counterparties know that at a wholesale and institutional level, they are safe.  For systemically important institutions (the friendly phrase given to organisations so large they could take down an entire economy) the additional buffer is designed to ensure they can deal with the ‘flight to safety’ they would inevitably receive as more counterparties decide to engage with them in crisis markets, and to ensure they have a small degree of additional strength to cope with the range and diversity (volatility) of assets the hold, and debt they create.

Imagine a hypothetical boxing match, where you have two world class prize fighters.  One represents our highly global and integrated economy, and one represents the banking industry (which, technically, is the lifeblood of the former).  In this fight, imagine that the boxer representing the economy is winning, with the boxer representing the banker having weakened from a few unexpected punches (the credit crunch).  Basel III effectively means putting thicker gloves on this boxer, without fixing the fundamental problem (they cannot cope with unexpected punches, from a highly developed adversary- the economy) .  Much like a boxer, once weakened, our fighter resorts to defensive positions to block punches, rather than fighting back.  This defensive posture can be seen as a bank withdrawing liquidity from the market, rather than pushing it out to stimulate trade, with thicker gloves just giving the ability to take a few more punches!

Economies are built on free flow of capital within the market, which drives trade.  Business and individuals need debt (finance) to invest, develop, trade and grow. This is a fundamental truth of how markets operate. Without that capital, businesses cannot survive, and individuals will suffer too (unable to buy key assets such as vehicles, real-estate, and so forth).  As anyone who has worked with a bank (as a small to medium enterprise) will know- these regulations (while providing comfort to institutions in the wholesale context) will simply see a reduction in funding to enterprise- and where funding is provided- the costs, conditions, and contingencies placed on that funding will often make it prohibitive (while the principle is academically sound, for example, it is nigh on impossible for most people to raise the 25-30% of cash required for the deposit on a property, and similarly, many business owners simply cannot find the assets to cover the guarantees they are asked to provide).  To contextualise the impact of this, it should be noted that, “Small and medium-sized firms employ more than 59.4 per cent of the private sector workforce, and contribute more than 50.1 per cent of the UK turnover.” Regulators need to understand it is these businesses, rather than their funders, who are the economic lifeblood of an economy.

Understanding the ‘sources’ of economic black-swans is also important.  These revised capital adequacy guidelines will shield banks from another crisis in the format we have seen (predominantly based on real estate, and instruments derived from it) but provide little or no protection against events which could occur such as systemic capital disruptions from terrorism and conflict,  huge volatility markets based around ‘intangible’ assets such as information, knowledge, brands, the disruptive economic impact of globalisation and climate change, and many more.  All these ‘theatres’ could produce economic events of the severity, if not greater, than the events which led to the recent economic crisis.

The banking market is highly developed and highly complex, and the technologies and principles exist to ensure that regulation and controls are introduced on an instrument to instrument basis, or even a market to market basis, based on the true nature of economic threats, rather than a hindsight based approach which shields against the previous-type of attack.

In much the same way as we would see in a boxing match, even if your opponent is wearing the best gloves, it only takes one lucky strike to knock him out.

Up Next: Learned Helplessness in Democracies and Economies