Being Ruthless about Ruthlessness 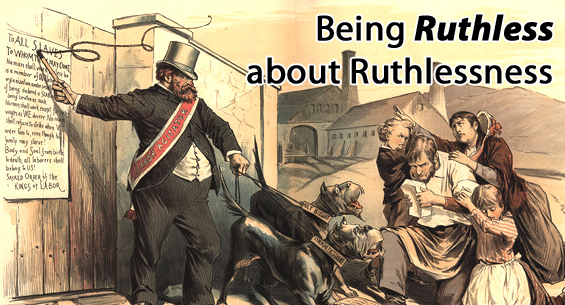 The industrial revolution created the archetypal businessman, characterized by their ruthless attitude towards commerce.

In a controversial paper, Jerry Bergman discusses the Robber Barons’ (a pejorative term used to describe businessmen in America) attitude to workers in the late 1800’s and early 1900’s. He describes how, “The robber barons’ lack of concern for the social welfare of the community, and even their companies’ own workers, ruined millions of lives. Injuries on the job due to unsafe working conditions were a major cause of death and permanent injury for decades during this period. The yearly total of such deaths, injury, and illness in the USA around 1900 has been estimated at around a million workers. Many steel mill foundry workers worked 12-hour shifts in 47°C heat for $1.25 a day. President Harrison said in 1892 that the average American worker was subject to danger every bit as great as soldiers in war.” He continues to state that, “…Human lives were considered so expendable by many capitalists that hundreds needlessly died laying railroad tracks alone. As one employer noted when asked to build roof protection for his workers, ‘Men are cheaper than shingles’.” In many parts of the [modern] world the behaviours of the US ‘Robber Barons’ is still apparent, seen even recently where, as Change.org reported “… After 28 workers were burned to death at an unsafe clothing factory in Bangladesh, tens of thousands of us from more than 70 countries called on companies buying from the factory to take responsibility.”

This alarming attitude of “command and control” sets the precedents which form what commentary describes as “Ruthless” behaviour (defined by the Oxford English Dictionary as, ‘having or showing no pity or compassion for others’). These attitudes (caricatured in popular culture by the likes of Alan Sugar and Donald Trump) are potentially the final throw-backs which connect the ‘information economy’ with the ‘industrial’. In this sense, a mill-owner (for example) commonly held a psychological ax over the heads of his workers (at all levels) which ingrained fear for their jobs should they not work as hard as the mill-owner required. Outside the mill, the attitude of ruthlessness would typically have caused defensive behavioral patterns in the partners and suppliers of the mill, fearing (often punitive) reprisals should they not bow to the whim of their customer (this is seen, even today, as international manufacturers are forced to take huge business risks fearing punitive actions from large supermarket buyers).

The growth of telecommunications including the internet, mobilization and allied technologies has changed our economy forever. We are now in a ‘human economy’ which is built on different principles. No longer command and control the drivers- but instead, concepts such as connectedness, empowerment, and collaboration. It is, if you like, a more thoughtful economy.

Prominent psychologist Brene Brown described, in her astonishing TED talk, how “…connection is why we’re here. It gives purpose and meaning to our lives. The ability to feel connected is neurobiologically wired into us.” In her research, she explores some of the most fundamental facets of human emotion and found that ‘Shame’ (a fear of disconnection) was one of the most powerful drivers of human behavior; a driver linked closely to a sense of ‘vulnerability’. Brene found that emotionally ‘successful’ individuals, who had a deep sense of worthiness, also were the ones with the courage to be authentic, the compassion to be kind (including to themselves) and therefore were the ones who managed to successfully maintain more emotional connections- they were authentic enough to let go of who they felt they should be and embraced who they are. She also observed that in modern life, one tries to numb these vulnerabilities through a variety of means (meaning we are now the most medicated, obese, and addicted population group in history). In a commercial environment, the ‘medication’ can be delivered in the form of behavior, via aggression – giving the aggressor (the company boss, for example) a sense of certainty in their environment, adopting the “I’m right, your wrong, shut up” stance, and ignoring their effect on people, rather than embracing uncertainty and vulnerability- which could, ironically, create much greater success for their businesses.

If you look at the real superstar companies such as Google, Apple, and Microsoft (to name just three) you will see that management styles are more authentic. Rather than assuming they know everything, they are honest about the skills gaps, filling them with people who do know the answers. Rather than assuming that management are the only people with ideas, they empower and engage their entire workforce, in a collaborative manner- all the while providing a compassionate and kind working environment. The companies that decide to empower and engage all of their employees may have decided to check out something similar to this guide on workforce management to help them do this effectively. A more compassionate and kind working environment could help to improve the success of the business in the long run. These ideas are almost the exact opposite of those which built companies like General Motors and GE, but have, in a tenth of the time, delivered companies which (in their relative infancy) have market capitalizations in excess of USD 100bn.

To take the paradigm from the social and political environment, you will see the same factors are true. The artists, philosophers, influencers and politicians who have had the greatest success and impact on society (albeit with a few exceptions due to predominantly economic circumstances ) have always been authentic in their emotional style, embracing their own imperfections and vulnerabilities, surrounding themselves with people who can help them, and maintaining powerful emotional connections with their audience, partners, and contemporaries.

Ironically, it is now time to be ruthless- albeit in a different way. We have to now be ruthless with ourselves, and break the cycle of creating emotional barriers (commonly known as ‘bravado’) and, instead, embrace authenticity and, hence, our own humanity.

2 Replies to “Being Ruthless about Ruthlessness”

Up Next: The Dangers of Economic Inequality