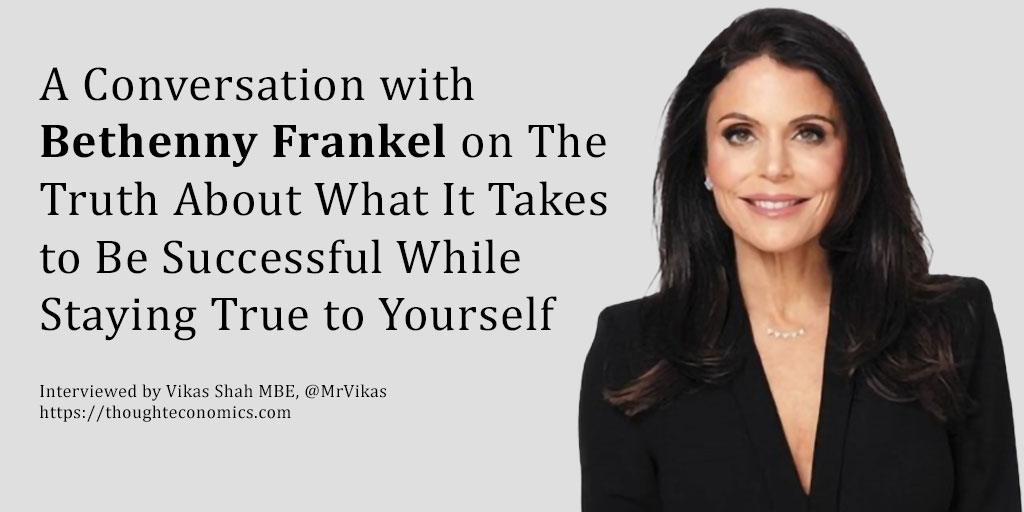 Bethenny was an instant fan favourite as a guest shark on ABC’s critically acclaimed series Shark Tank, showcasing her entrepreneurial prowess and gut instincts alongside the panel of investors. In 2019, Bethenny left the popular Bravo series The Real Housewives of New York City to focus more on her daughter, her philanthropy, and her business. Bethenny has also been named one of the Top 100 Most Powerful Celebrities by Forbes. She is always ahead of the curve, with an expertise in identifying and capitalizing on business opportunities.

In this interview, I speak to Bethenny Frankel about her book, Business is Personal. I ask Bethenny about the most important tips and tricks she used to build a business, become a media personality, and maintain balance as a mogul, and a mother. We talk about success, failure, entrepreneurship culture, when to quit, and what legacy really means.

Q: Why do people find it so hard to be true to themselves?

[Bethenny Frankel]: Most people don’t know who they are. They’re trying to be what other people want them to be- or they’re trying to create something that fills a void that comes from within. The pressure to conform is huge right now, especially with people getting cancelled; saying what you really feel can make you unpopular… so people box themselves into a place where they’re not celebrated or respected for being truthful. It’s tragic.

Q: What does success mean to you?

[Bethenny Frankel]: I know I’m successful because I’ve set goals, achieved goals, broken barriers, been a game changer, and been first in so many fields in a non-traditional way. Each individual win is a success, and you develop a lot of trust with those close to you, but you also develop a thick skin. You realise that you can do something unpopular, and it won’t be the ruination of you… one good or bad decision won’t define you. It’s the layering and texturing of institutional knowledge that you pick-up along the way that helps you moving forward. I was talking to someone I work with yesterday and said, ‘you’re going to have to allow me to give you this advice because I’ve bene doing this for 25 years…’ The institutional knowledge you develop in your career is somewhat like case-law. It’s effectively, ‘…this shit show happened… and I had to do X, Y, Z… this other shit show happened… I had to do X, Y, Z…’

I’m not an entrepreneur by birth. I didn’t even know what the word meant, or what all the branding and labels were around it. I didn’t know everything I was going to be. I know that sounds like a cliché… but what’s not a cliché is that I’ve gone one step at a time… set goals… broken barriers… pushed through…. When nine people say no, I say yes and make it happen. I just keep going.

[Vikas: Did you ever have a mentor on that journey?]

[Bethenny Frankel]:  I never had a mentor…. I still don’t know. I didn’t’ know there even were mentors when I was getting started… If someone said to me, ‘find a mentor!’ I would have been like, ‘what’s that? Something like adopt-a-bear?’

Q: How do you cope with the scrutiny and pressure of entrepreneurship?

[Bethenny Frankel]: I genuinely don’t care about scrutiny – it’s a zero on a scale of 1 to 10 for me. If the table goes cold, I’ll walk out of the casino. I’m good… I’ve got my nest-egg… I’m happy. I do this every day because I like it and want to accomplish my goals.

[Vikas: what about today’s ‘culture’ around entrepreneurship?]

[Bethenny Frankel]: Today, we see more shark tanks… more entrepreneurs and billionaires who started out of garages… everyone feels like they ought to know what they need to know at 20. It’s debilitating. Everybody feels like they’re supposed to know how it’s going to go… and what they’re supposed to do… There’s so much information out there – everybody’s had every idea, executed and been successful.

Q: How do you manage risk as an entrepreneur?

[Bethenny Frankel]: You see all these stories about people who have put their houses on the line for their business… who are risking their kids’ futures and can’t make their insurance payments. It’s too much, you can’t do that… the fear and anxiety will pull you down… you must find a way to finesse it. That may be a side hustle, it may be something else. There were many ways I made money that were not the main thing I was doing. I was selling handbags… gifts…. I was baking… I was doing meal delivery… I was doing a thousand different things to make rent. You have to make money to survive while you’re figuring this thing out. You don’t have to choose a business that’s going to drown you, be a treadmill, or suck you underneath. You can start slow, make a bit of money and then double down. You don’t’ have to risk it all at the beginning. Start slow… make a bit of money… make a bit more… then you’re playing with the house’s money. That’s how I invest financially too. I’m quite risk averse with my investments because I take risks in my career.

Q: Is there ever a right time to quit?

[Bethenny Frankel]: I was a natural food chef about 20 years before it was popular. I had a wheat, egg and dairy free cookie company called Bethenny Bakes. The cookies were delicious! I had a bakery involved… I had a team baking it…. I was shrink wrapping and packing them myself… I was spending good money after bad, and people loved the cookies, but I was basically paying people to eat the cookies. It was a humbling experience, I had to fold the business because I couldn’t get ahead of it. I went through multiple bakeries and different models, but it just didn’t find traction. It was ahead of its time! Now it’s different. I’m credible. I could get a real partner to bake the cookies with original recipes, and market them, it would be seamless. At the time though, I had to fold. I couldn’t keep going and spending money. It was humbling to have to eat the money. I did so many things… I was importing pashmina fabrics, making money, making shawls, robes, pyjamas, ponchos… that did well. I got too excited though – and as it grew, I got too drawn into the creative side… in beading… and it started to suck the program down, the whole thing folded.

All these experiences are like case-law. They’re learning experiences. You’re going to break some eggs; it’s going to happen.

Q: How important is knowing who you are outside work?

[Bethenny Frankel]: I talk about being a businessperson, but who I am outside the business is a much bigger piece of the pie. I’ve always been someone who’s tough, organised, and gets things done. It doesn’t matter if I’m renovating a house, cleaning the garage, making my daughter’s Halloween costume, or cooking dinner. I’m the ‘same’ in every-single-thing and I guess that’s why I’m good at business! I’m more invested, present and have way more of a ratio in my personal, private and ‘not a famous person,’ life. I don’t go to anything unless it’s for work. This week, I’m doing interviews for my book launch, so I put some makeup on, and I will semi-socialise and it will seem like this person [me] has this big-fancy-life. However, that’s literally ten-days out of an entire year. I never go anywhere… and I want to say no to everything. I don’t want to do anything – and feel like saying no to everything. I just want to relax in the backyard. I’m more personal than business.

I don’t like small talk, you know? If I go somewhere, my publicist says, ‘we’re going here… and there are some major people… brilliant minds… they have networks, charity donors….’ – I’ll have a great time, interact, and will have a goal – I’m not going to find new friends.

Q: How did philanthropy come into your life?

[Bethenny Frankel]: When I started in philanthropy- I was going to Texas, Puerto Rico and the Bahamas multiple times a year. I wanted to help. I realised that my skill set in business, and my way of getting things done more quickly and efficiently meant that there was nobody who could beat me, you know? That skill set is perfect for philanthropy – it became like a business for me. Once it got massive, my partner Michael let me focus on mission and his team handle operations and logistics. We’re unstoppable now. He’s operations, and I’m mission. I focus on the creative vision, how we execute, where our money is spent, our messaging and our transparency. But, guess what… the head of Coca-Cola isn’t the one putting the liquid in the bottles. I sometimes feel bad that I’m not always there, but I have a business, I have a family, I have to go out and ask people for money and I have to coordinate things. It’s a business partnership. My job is vision and partnership, and the team’s job is logistics and execution. Recently, in a short period of time, we’ve deployed over $125 million to Ukraine, Hungary and Poland – that’s because of our efficiency, lean use of funds, and vision.

[Bethenny Frankel]: I’m not about legacy, I sweat the small stuff and don’t think too much about the big picture. I don’t have big lofty goals, I just have goals I can execute, and sometimes experiments I run. I wanted to start doing these beauty reviews because I thought the whole beauty industry was a scam. All of a sudden, I’m getting millions of views on some lip-gloss do-and-don’t-buy. I’m not even in the beauty industry! I’m not even that good at doing my own make-up! I just do things I find funny and interesting. It’s not that deep or philosophical, honestly.

I try to be authentic. When most people are asked questions, they try to jump into the other person’s mind and second-guess what they’re supposed to be saying. They want to sound interesting… they want to sound smart, like a mogul who’s on the cover of Forbes. I just want to tell it like it is…

A Conversation with Mitch Lowe, Co-Founding Executive of Netflix, Former CEO of Moviepass and Former President of Redbox.

Getting Along: How to Work with Anyone (Even Difficult People) – A Conversation with Amy Gallo.

Up Next: A Conversation with Robert Reich, Former US Secretary of Labor.