Close Search ×
Order the Book Subscribe Free
A Conversation with Brian A. Wong on The Tao of Alibaba: The Chinese Digital Giant That Is Changing the World.

A Conversation with Brian A. Wong on The Tao of Alibaba: The Chinese Digital Giant That Is Changing the World. 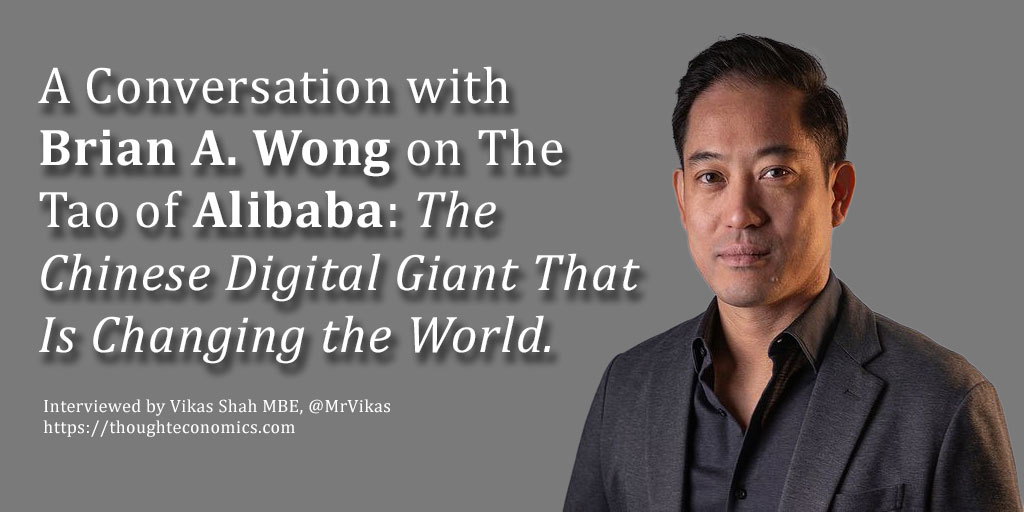 Alibaba combines the economic might of Amazon, the penetration of Facebook, the ubiquity of Google and the cultural significance of YouTube. In China alone, Alibaba has over close to 1billion active customers and over 250,000 employees. At peak, the platform processed over 583,000 orders per second. Each year, Alibaba receives over 12.7billion orders, and over half of China’s domestic parcels relate to Alibaba.

Brian A. Wong is a Chinese American entrepreneur and investor. He was the first American, and only the 52nd employee to join Alibaba Group, where he contributed to the company’s early globalization efforts and served as Jack Ma’s special assistant for international affairs. During his sixteen-year tenure, Wong established the Alibaba Global Initiatives (AGI) division and was the founder and executive director of the Alibaba Global Leadership Academy. In his new book the Tao of Alibaba, Brian A. Wong reveals the secret sauce of this remarkable global business, a consciously cultivated ethos and spirit that has enabled Alibaba to weather tough times and setbacks, and to persist towards a common mission.

In this interview, I speak to Brian A. Wong about the management philosophy of Alibaba and how purpose-led entrepreneurship played a key role in creating one of the world’s fastest growing, and most successful businesses.

Q: What are the differences in entrepreneurship culture between the US and China?

[Brian A. Wong]: At the core, I don’t think there’s a significant difference between Chinese and US entrepreneurs and how they approach ventures. Everyone is striving to solve problems they see in the environment around them, they’re taking risks and making sacrifices to be successful in what they’re trying to do. Essentially, it’s the same sort of people who have the same sort of demeanour to go out and take these chances. Whether it’s lean-start-up or other models, you see very similar approaches too.

When China started its open-door policy, 40 years ago, it was a much different environment. There was nothing to work with! It was a communist system before that, a planned economy, no free market. People started building things from scratch.

Q: What is the principle of Tao, and how does that apply to business?

Taoism allows you to find a path through interconnectedness, harmony, and balance. Whilst it’s very much traditional Chinese thinking, it does still permeate modern Chinese society. Everything from the smallest minutiae of the human body to the universe can be seen through the Tao lens. If we want to think about business and business operations, Tao presents a path. How do you set your organisation on a path through something – like your mission, vision, and values. How do you define those and help the organisation to internalise the understanding of them.

[Vikas: How does this relate to Tai Chi management principles?]

[Brian A. Wong]: Tai Chi is the physical manifestation of the Taoist philosophy. On one hand, it’s a physical movement, but it’s also a martial art. You see a lot of people practicing Tai Chi in parks, but it’s also internal mediation, breathing and awareness. It represents the union of yin and yang. Jack Ma encouraged the entire company to practice and learn Tai Chi in their free time, it is a practice that allows one to embrace the seeming contradictions in the world, and in business. Let me give you some examples – how do you become a profitable business while also doing good for society? How do you embrace ambiguity while also using scientific thinking?

Jonathan Liu was the founder, founding CEO of Alipay. Jack Ma went to Jonathan (who was an employee at the time at Alibaba, he was one of the sales leaders) and said, Jonathan, what do you know about finance? He’s said, ‘I don’t know anything about finance. It’s not my background’. Jack said, ‘Well, what do you know about PayPal?‘ – his response, ‘I don’t know anything about PayPal’. Jack then said, ‘Okay, you’re hired, we want you to be the CEO of Ali Pay!’. Jonathan was actually a hotel manager prior to coming to Alibaba. And what Jonathan understood was how to provide and understand customer needs. And Jack wanted someone who was completely separated from the traditional financial system to build something that was useful beyond just the traditional approach of providing financial services. Those are some of the juxtapositions or kind of contradictions that one has to embrace when building a business. And I think that kind of this Taoist thinking kind of helps to bring that together, because most people are scratching their head trying to understand why these kinds of decisions were made.

[Brian A. Wong]: When Alibaba started, it had a very clear mission. The company took mission very seriously, it was part of the DNA of the founding team. That mission was to make it easy to do business, anywhere. That may sound very simple, but it manifested as – for example – helping small entrepreneurs to be part of the mainstream economy, using technology. This is something Jack felt very strongly about and set as a North Star for the business. As the company grew it went from being a business-to-business marketplace, to consumer markets, payments, cloud, computing, and logistics. These are all different businesses, but they support each other to achieve the complete circle. This approach also created a very strong company culture, many of Alibaba’s employees are there 22years after joining.

[Brian A. Wong]: Alibaba’s vision statement includes a mention of how long it wants to last, and that is specifically 102 years. 100 years sounds like a cliché, it doesn’t sound special or memorable… 102 years sticks in your mind, and the reason for this specific figure is that Jack Ma wanted Alibaba to be the only internet company that spanned three centuries. This provides a long-term view, and long-term reference point for making decisions. For example, there are plenty of business decisions which may sacrifice short term profits, but which could build-out customer loyalty and long-term value. In 2009, all 18 of the company’s founders had to resign and then come back to be rehired as normal employees, Jack did want the company to have the feel of a founder-controlled organisation. Everyone had to feel a sense of ownership. The company also created the Alibaba partnership which meant that when Jack Ma retired (as he did in 2019), there was a group of people who were in the business, responsible for carrying the legacy forward and who would protect things like values.

I definitely think there’s a sense of responsibility in this organisation that’s quite unique from your average private sector company. Taoism speaks to the interconnectedness of the universe, and how everything and everyone has an impact on everything and everyone. In 2010, Alibaba started talking about itself as an ecosystem and it invited many of the world’s top biologists to come and lecture on how plants, water and animals all interact – and how that could teach a business about how to interact with its’ own marketplace. In the US, we see this manifesting as stakeholder capitalism – and the move from shareholder to stakeholder capitalism. ESG is part of that, but it’s so much more.  Governance must widen its’ perspectives to think about the implications, and ramifications, of business in society and how business can be used as a force for good. Traditionally, people thought of social impact as a nice to have, something on the side as part of your ‘CSR.’ Increasingly, there is a belief that it should be core to a business. Alibaba convinced me that it’s possible to do good for society, and to do good in business.

[Brian A. Wong]: I’ve always aspired to leave a legacy, but as individuals we are very small drops in a vast ocean.

All over the world, entrepreneurs have the same aspirations. Talent is equally distributed, but opportunity is not. Technology is a great equaliser, and an enabler of opportunity. I saw this first hand and through my work now – whether that’s investment or philanthropy, that’s the work I want to promote.

Up Next: Entrepreneurship as Experimentation