A Conversation with Carlo Ancelotti on Winning Hearts, Minds & Matches. 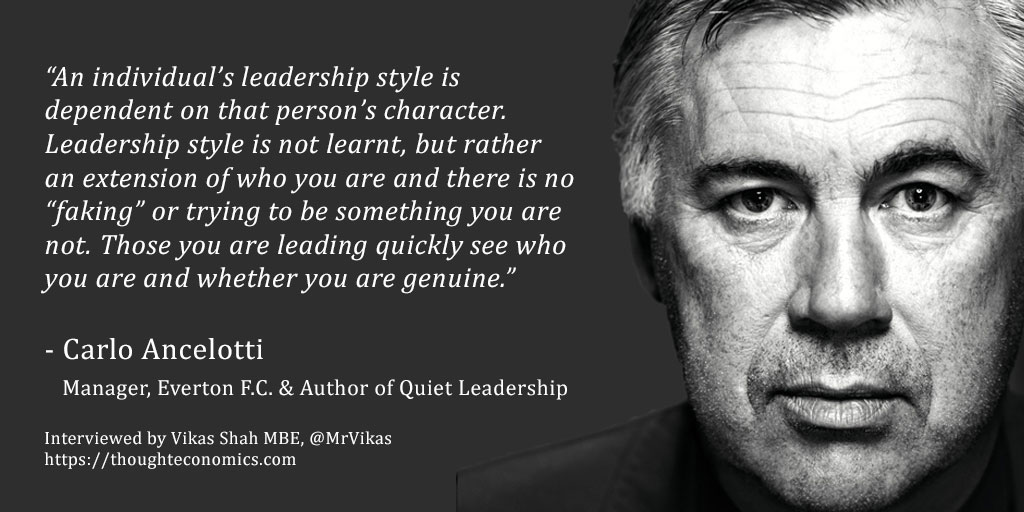 Carlo Ancelotti has coached some of the most successful football teams of all times including Real Madrid, Bayern Munich, PSG, Chelsea, Milan, Everton and Juventus. Widely regarded as one of the greatest football managers of all time, with five Champions League titles to his name, he is currently the manager of Premier League club Everton. Carlo’s unique approach could not be further from the aggressive theatricals favoured by many of his rivals. His understated style has earned him the fierce loyalty of players like David Beckham, Zlatan Ibrahimovic and Cristiano Ronaldo.

In seminal book Quiet Leadership, Ancelotti revealed the full, riveting story of his managerial career—his methods, mentors, mistakes, and triumphs—and he took us inside the dressing room to trace the characters, challenges, and decisions that have shaped him.

In this exclusive interview, I spoke to Carlo about what we can all learn from Quiet Leadership.

Q: How do leaders learn their craft?

[Carlo Ancelotti] Leadership is learned through one’s life experience. Initially it will be influenced by the early role models in one’s life such as my father. Later it is by those leaders which one meets as an adult. These are the ones with whom you identify with, respect and what to emulate.

Q: What is the role of failure in your leadership journey?

[Carlo Ancelotti] Failure is an important tool with which one can reassess and reconstruct an idea or process, it is an essential element of the feedback loop. Failure should be used to step back and question your method and weaknesses. To recognize failure early can ultimately make one much stronger down the road.

Q: What are the most important tools to your leadership approach?

[Carlo Ancelotti] Motivation and compassion are important tools. I work hard at motivating and making sure the players are the best they can be, but at the end of the day not every player can be on the pitch during the game.

The hardest part of the job is telling those players that they are not playing, I remember from my playing days how that felt. This is when compassion is an important tool as well.

Q: How do you plan your strategy over your arc?

[Carlo Ancelotti] I know that there is an arc and that one day, either at my choosing or the club’s, I will begin the downward part of the arc. I know when this is coming because people at the club stop talking about the future. That is a big sign.

When I see that the Arc is on the decline I start looking for a new Club! <laughs>

Q: How do you maintain your resilience as a leader?

[Carlo Ancelotti] I love my job and Football is my passion. I never tire of being part of this world and crave the adrenaline that comes with it.

Q: What do you know now, which you wish you had known at the beginning of your journey?

[Carlo Ancelotti] I wish I had known that Football is the most important part of the least important parts of my life. A bad result or losing in a final of the champions League is hard to take, but there are worse things to endure in life.

Up Next: A Conversation With Tim Peake – The First British ESA Astronaut To Visit The ISS, Former Test Pilot & Bestselling Author.