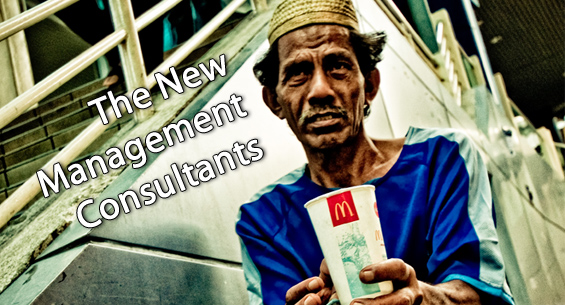 In July 2010, the Economist observed how non-profit organisations “…are commonly advised to become more like for-profit businesses. Management experts and consultants view them as horribly inefficient due to the absence of the concentrating power of the profit motive… [however] there has been barely any reciprocal pressure on for-profit firms to learn from the non-profits.”

Organisations in the third-sector (an umbrella phrase used to describe the not-for-profit sector) have a number of key characteristics which  differentiate them from their ‘for-profit’ counterparts:

Unlike most products and services, transactions in the third-sector have a different consumption point.  Where an individual or organisation engages in a transaction in the ‘for profit’ world, there is usually the delivery of goods or services for the buyer in exchange for their money- so we have a motive (the need for that good or service) for the consumption act which has an inherent value-perception (insofar as the buyer receives value from money from the supplier by way of the price they pay for the good or service, versus the benefit they receive from it).   In the third-sector, however, as the Economist identified, organisations, “…have to persuade people to part with money for goods or services that are used by others“.  This is not only a harder concept to work with from a transactional point of view (as one’s purchase motives are different) but it introduces a uniquely difficult proposition in the presentation of value for money (with the incumbent ethical argument of whether, indeed, charities should have to).

Unlike the ‘for profit’ sector, where the participants of a transaction are, themselves, the ultimate beneficiaries of the profit or utility- in the third sector, beneficiaries to transactions are usually separate from the organisation engaging in transaction, and so the utility (or profit) is transferred to them.  For third-sector organisations, this is manifest as the “not for profit” motive, which changes the organisation’s perception of many key business areas.  At one level, the ‘macro-prudential’ purposes become sustainability (can we keep our charity running) together with growth (how can we secure more resource to serve our beneficiaries)- both held in the context of organisations who, “have to scrape by on ‘zilch’ or, at most, on a fraction of what is taken for granted in the for-profit world.”

What Can Business Learn?

If, like we would in a ‘for-profit’ context, we look at the organisations in the third sector who exhibit best-practice, we see some key areas where businesses can learn from them:

In the third-sector, there is very little (if any) slack in organisations where we consider financial and other assets.  This creates the need for efficiency within organisations in all contexts, from the procurement and management of goods and services, through to the allocation of resource (including people).  Any for-profit business need only look at the financials for a charity they know on the Charity Commission website- to be astounded at what these organisations achieve with the cash and assets they have at their disposal.

2. Marketing to and Understanding “Customers”:

We looked, above, at consumption motive.  For third-sector organisations ,this means that more than their for-profit counterparts they have to understand the psychology of what motivates their customers (donors and partners) what are the motives that trigger them to engage? what are the drivers influencing those motives?.  While many third-sector organisations may not realise it, this is incredibly high level thinking and gives a deep understanding of customer psychology which is usually only seen in the large-corporate environment such as Coca Cola.  Alongside this, third-sector organisations have to really understand the media and press to be able to leverage opportunities to market through traditional channels (web, newspapers, radio, and so forth) together with emerging platforms such as social media.  For commercial organisations, looking at the hooks third-sector participants use in these contexts, along with their strategies, can teach us a lot about how to make marketing more effective,  how to understand our customers more, and  how to build long-term equity in the relationships we have.

Leadership is potentially one of the greatest buzzwords in management-consulting, but one which is acutely relevant to the third-sector, where organisations have to acquire, motivate, and retain exceptionally talented people, on salaries which are often a magnitude smaller than what they could achieve in the “for profit” world, and often with greater challenges within their roles.  The ‘secret’ to this seems to be the method by which people are engaged.  Within the third sector, management structures are considerably flatter than in the ‘for profit’ sector, individuals carry greater responsibility from earlier in their careers (as a function of the need for them to be immediately productive), and individuals throughout an organisation are usually far more passionate and committed to the organisation than in most for-profit companies.  Third sector organisations have learnt, through necessity, to rally their teams around a common goal (in this case, their ultimate beneficiaries).  This is no mean feat, and requires clever thinking, and the active cultivation of ‘borderless’ roles (where everyone chips in, at all levels of an organisation).  The net result, though, is highly motivated teams, who are motivated by the “end” (the cause) rather than the “method” (the task) and so the organisation, as a whole, benefits- with less politics, greed and apathy than for-profit environments.

Ultimately, no sector is perfect, and for every example of ingenuity and efficiency within the third sector, we will find one example of the exact opposite (a trait which is similarly apparent in the for-profit sector).  The message, though, is that at a time where every organisation in the world is faced with constrictions on resource, increased competition, and uncertain markets, we can learn a lot from organisations who, over the last half-century, have (for different reasons) had the same challenges.
As with so many things in life, the solution to our problems is not far from where we are.

Up Next: The Internet