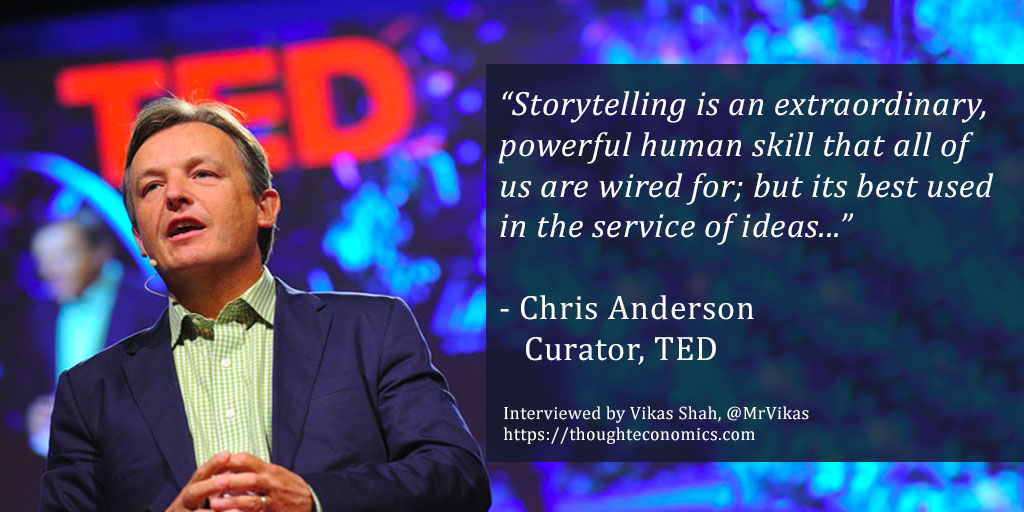 From humble beginnings in 1984, TED (Technology, Entertainment, Design) has grown to become the centre of gravity for the intellectual curious of our digital era.  Their flagship TED conference, and global network of TEDx events have created hundreds of thousands of unique pieces of video content, watched billions of times, covering topics as diverse as humanity itself.  This remarkable organisation is bound together with the single mission, that being to promote ideas worth spreading.

It is fitting perhaps, that the owner and curator of TED is one of life’s great renaissance individuals.  Chris Anderson was born in a remote Pakistani village to medical missionaries, and growing up in the mountains bordering Pakistan, India and Afghanistan, it seemed unlikely at first glance that he would have become the entrepreneur who would launch Future Publishing in 1985, turning it into one of the world’s most successful multi-channel media companies.  It was this success which enabled him to follow a journey into philanthropy, launching the Sapling foundation; acquiring TED in 2001 (from Richard Wurman), beginning a journey which has inspired millions of people around the world.

TED has showcased many of the world’s greatest speakers and storytellers, and I caught up with the organisation’s owner & curator, Chris Anderson to learn more about storytelling and what makes a great talk.

Q:  What fascinated you about storytelling?

[Chris Anderson]: Storytelling is an extraordinary powerful human skill that all of us are wired for; but its best used in the service of ideas.

I’ve always been curious; and as a kid (like most kids) the world seemed baffling, amazing… I always wanted to know the why and the how.  Some of my deepest memories are literally lying down at night when we were outdoors, looking up at the stars and being awestruck, wondering how all of this happened… Wondering who we are, where we came from and what it all means.

The world is so impossibly complex, beautiful and fragile and this gives us so many questions that we should ask.  Curiosity is powerful, and that is the heart of TED.

Q:  What creates a great talk?

[Chris Anderson]: A talk can give you an extraordinary new insight about the world, a way of thinking about things that you never knew.  Talks can impart new knowledge, surprise you or take your breath away.  They can give you a vision of the world as it could be.

The possibilities we have are infinite, and talks can come from so many aspects of our lives- from design, entrepreneurship, science, vision and experience.

There’s no such thing as a formula for a great talk but the best are the ones where a speaker connects deeply with an audience, shows them why their passion matters, and takes the audience on a journey.

Q:  What is the role of body language in delivering a talk?

[Chris Anderson]: Body language certainly matters but I think people can worry about it too much.  I don’t like to think of speakers of performing… and ultimately the way you speak matters far more than the body language.

Body language comes into communicating authentically and what matters is that you’re sharing something you know to be important.

Q:  How do you get over fear in public speaking?

[Chris Anderson]: Fear is there for a reason; every sentient animal has that sense of fear for the unknown, for the different.  With public speaking, a lot of people don’t actually listen to this fear and take the time to act, and avoid anything horrible happening.

It’s horrible to be on stage and freeze up, or say something clumsily, or to damage your reputation- people in one way are right to be fearful; we’re social animals, and sometimes that talk is your biggest shot at enhancing your reputation or spreading an idea that matters to you.

The best way of managing fear is preparation; and amazingly, unlike other types of public appearance that involve major planning and rehearsals (for example, theatre) people don’t often prepare enough for talks.  The right preparation and the right rehearsal really matters.

When I talk of rehearsing, I’m not talking about preening yourself in front of a mirror! You need to be absolutely sure that what you’re saying connects and communicates, that the talk is really in you- that you know it- and you’re not having to panic on stage about trying to remember it in the moment.   There are a few people who are natural speakers and can wing-it, but that’s extraordinarily rare and even they benefit from preparation and rehearsal.

Let me give you an example.  It’s almost certain that some of what you’re saying is confusing; people suffer from the curse of knowledge, they don’t know what they don’t know!  All of us have different starting points, different assumptions and a different knowledge base.  When you communicate to someone, if they don’t have that exact same knowledge base, there’s a chance you are going to lose them at key moments.

The single most important thing someone can do for a talk is to plan three or four rehearsals in front of people who are like the audience who will be receiving it; it may be one person or three, but you really should do that and discover what works, what doesn’t, what’s clumsy, what resonates.  By practicing, you will get the confidence to get into the moment and say, ‘you know what, I’ve got this….’

Q:  What are your views on slides and props?

[Chris Anderson]: You have to always do what’s right for your idea.  Different talks have different needs.  Some talks are fundamentally visual, you may need to show the photo of your adventure, or that extraordinary piece of design work you are doing.  Some concepts are best explained visually, and you may need a diagram or a graph; but slides should only be used if they have to be.

Every time you put up a slide, you’re diverting attention, and that dance between what you’re saying and what’s on screen really matters.  The most annoying talks are the ones that duplicate; they put up on screen what they’re about to say, people read ahead and by the time the speaker gets to it, it’s old news.  That’s how you lose an audience.

Most people could use fewer slides with less text; but ultimately, you have to judge what’s essential for your talk.

Q:  How can audiences better participate in talks?

[Chris Anderson]: There is an implicit contract between speaker and audience.

The speaker’s deal is that they have prepared properly, and that they really do have something interesting to say.  The audience’s part of the deal is to give the speaker a chance to unpack what they want to say and to really listen, and suspend skepticism as best they can, for as long as they can.

The number one crime you can commit during a talk is to pull out your phone at a moment you think isn’t currently interesting for you.  You’re doing yourself a disservice, you will lose the thread of the talk, and probably never gain it back,.  You’ll miss key context, key messages, and may even that key idea.

You’re doing a disservice to the people behind you who could get distracted and annoyed with your glowing device, and for a speaker? It’s incredibly disheartening to see eyeballs going down to screens.

At TED, we ban screens except for journalists.

Screens are weapons of mass distraction, and as audiences we have to listen and give speakers a chance.

Q:  What do you hope the legacy of TED will be?

I don’t want TED to need to have a legacy, I want it to grow, to continue flourishing.

Our world needs a more reflective way of communicating, something which the media are not promoting.  We need an antidote to the current shooting-from-the-hip, and outrage sparking emotive content that is causing mutual incomprehension, it’s a tragedy.

We need to be in a world where people can get online and see content for them, in their language, that is deeply relevant to them- and from which they can learn, be inspired and grow.

We’ve started a few tiny steps in that journey, and we’ve got a long way to go.

Humans have this incredible ability; we understand the world around us, we can dream, we can share visions of the future and persuade each other- and ourselves- to improve.    This is so deep in our biology…. Even the first humans, hundreds of thousands of years ago, grunting around a fire, cheered each other on and built mutual empathy, understanding, shared feelings, passions and visions.  This is us; we have a shot at collaboratively building a better future, and we’re only just started.

Let’s not talk of legacy, but talk of missions instead.

Up Next: Our Fight With Cancer