Close Search ×
Order the Book Subscribe Free
Our Crisis of Reason & The Need for Clear Thinking – A Conversation with Christer Sturmark.

Our Crisis of Reason & The Need for Clear Thinking – A Conversation with Christer Sturmark. 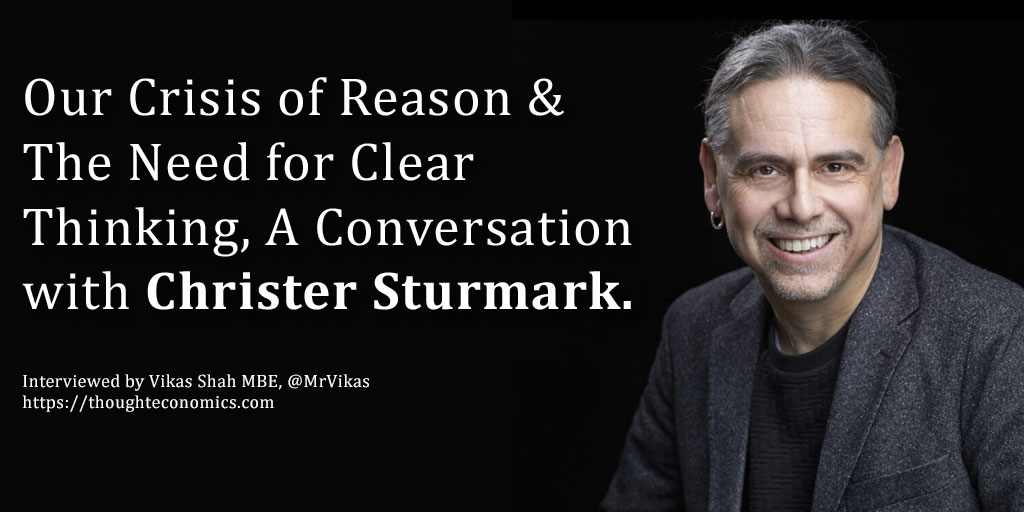 In country after country, conspiracy theories and religious dogmas that once seemed to have been overtaken by enlightened thought are helping to loft authoritarian leaders into power. The effects are being felt by women, ethnic minorities, teachers, scientists, and students – and by the environment, the ultimate victim of climate change denial. We need clear thinking now more than ever.

Christer Sturmark is a crusading secular humanist as well as a Swedish publisher and entrepreneur, and The Flame of Reason is his manifesto for a better world. It provides a set of simple tools for clear thinking in the face of populist dogmas, anti- science attitudes and pseudo-philosophy, and suggestions for how we can move towards a new enlightenment. From truth to Quantum Physics, moral philosophy to the Myers-Briggs test, Sturmark offers a passionate defence of rational thought, science, tolerance and pluralism; a warm and engaging guide for anyone who wants to better navigate the modern world.

In this interview, I speak to Christer Sturmark about the characteristics of knowledge and truth, why we are facing a crisis of reason, and the mental tools we all need to navigate our world.

Q: How do we differentiate yesterday’s thinking from today?

[Christer Sturmark]: Before the scientific revolution, ordinary people thought trees, mountains and souls had spirits. If you read literature from that time- those things are obviously true to the people of that time. To them, that’s how the world was. The enlightenment brought the idea that you could use reason to study the empirical world and that what you believed should be based on evidence. Philosophers and mathematicians started to develop mathematical tools, and to some extent the world was disenchanted. People started to break-away from the scarier aspects of religious, and magical, thought.

Q: How do we characterise knowledge and truth?

[Christer Sturmark]: Knowledge has been defined going back to Plato. Something becomes knowledge when you believe it, it is true, and you have evidence for your belief. These three criteria must be met to be considered knowledge.. I cannot have knowledge that Paris is in France if I don’t- for example- believe it. Even if I believe it, if it’s not true, then it’s not knowledge. I can believe that there are 21,000 people in the city right now… it might well be true… but I have no reason to believe it, it’s just a guess. Even if it’s true, even if I believe, it’s not knowledge. This Platonic definition of knowledge still holds today.

So, what is a fact? What is truth? – Truth is a quality of reality. It has nothing to do with what I believe. Truth, when it comes to empirical issues, is an objective thing. Whether something is true or not is independent of whether I think it is true or not, and a lot of people confuse this. People say that we cannot trust science because once-upon-a-time scientists held it true that the earth was flat; that’s not correct. It was never true that the earth was flat, even if people believed it. Truth is an objective quality of the empirical world, and independent of what we think about it.

The scientific method allows us to approach the truth by gathering evidence. It gives us the reasonable-evidence to believe something yet encourages us to keep an open-mind.

Q: Why are we facing a crisis of reason?

[Christer Sturmark]: We are a product of evolution, and the mechanism of evolution is natural selection. Evolution is selecting for survival, and the qualities we have are evolved to help us survive as well as possible. Our cognitive capability to reason has not evolved to find truth, it evolved to help us survive and that means that we sometimes find it easier to stay with a group rather than believe the correct thing. If your friends and social environment believe in astrology, it might be  better to believe in astrology rather than risk being cast out of the group.

Q: Why is our crisis of reason growing?

Our world also feels less secure. We have so much happening- culture wars, trans-national conflict, economic insecurity, it’s frightening, and can feel ‘above our heads.’ It’s not inconceivable that people would therefore believe in a ‘global elite’ or even crazier theories like QAnon.

Q: What are the cognitive tools we need to meet the world more effectively?

[Christer Sturmark]: We have to be aware of our cognitive fallacies to build some immunity to our cognitive traps. One simple thing we can all do is work on our own confirmation bias from time to time. I try to read things by people I disagree with for example, because I want to hear their best arguments and see whether my beliefs and values stand-up to them. This comes with the risk that you may have to change your mind- but it’s lazy to just read things you believe. We can never get rid of our bias, but we can be more aware of it…

Q: Can our thought ever be free?

[Christer Sturmark]: I don’t think we can ever be totally free, but that’s the beauty of the scientific method. It has been developed to take care of many of those aspects – for example, take the double-blind test. It’s such a smart idea! Neither the people in the experiment, nor the experimenter, know who had the sugar-pill or the real thing. It’s beautiful in its simplicity and it eliminates confirmation bias and wishful thinking. At a wider scale, look at the scientific community. If a scientist presents a study, other scientists will try to replicate it – and it’s not until you can replicate it many times that an idea becomes accepted. You need creativity too – let’s not forget that Einstein’s ideas were unverified or many, many years.

Q: Why are we predisposed to magical thinking?

[Christer Sturmark]: Magical thinking is a bi-product of cognitive process that were useful in our evolutionary survival. Firstly, pattern matching. We’re good at seeing patterns. We’re so good at it that we see patterns everywhere, even when they don’t exist. Also we see agency and intentionality around us, sometimes even when there is none. There’s a purpose to that – it’s better to believe the movement in the dark is a tiger, rather than the wind blowing thru a bush. Its better to be wrong on that, than the other way around.. When you realise the evolutionary basis for our cognitive processes, you realise that things like magical thinking are based on cognitive processes that have survival reasons behind them. We connect the dots to see patterns for survival. You can also therefore easily understand how, through magical thinking, we could create the idea of a God. I have no problem with the abstract concept of God of course, it can provide a sense of meaning to some people. If you have a more fundamentalist view of religion of course, that’s extremely dangerous.

Q: How does this link to the notion of identity, which now seems to dominate politics?

[Christer Sturmark]: The politics of identity has gone very wrong in many cases. In Sweden, we have a situation where politics’ says you should group yourself based on your religious or ethnic identity. Politicians often forget that people are much more complex, and are a mix of many identities – and each of these identities can be of differing importance to the individual. A Muslim man from Somalia, who is a chess player, may have his chess-playing as his main source of identity, for example.

A lot of political discussions today are about identity. Look at the Balkan war of the 1990s. You had the former Yugoslavia which had lots of ethnic and religious identities. Milosevic came and started to divide the population on identity lines, and it ended with a terrible, tragic war.

Q: How can we live peaceful, more fulfilled lives?

[Christer Sturmark]: We have to nurture reason through learning and listening to other people. As long as people are interested in doing that, I think we will be ok. That’s the basis for us seeing the humanity in each other.

Up Next: A Conversation with Rose McGowan, Activist, Artist and Agent of Change.