Close Search ×
Order the Book Subscribe Free
A Conversation with Christiana Figueres, one of the architects of the Paris Agreement & Co-Founder of Global Optimism.

A Conversation with Christiana Figueres, one of the architects of the Paris Agreement & Co-Founder of Global Optimism. 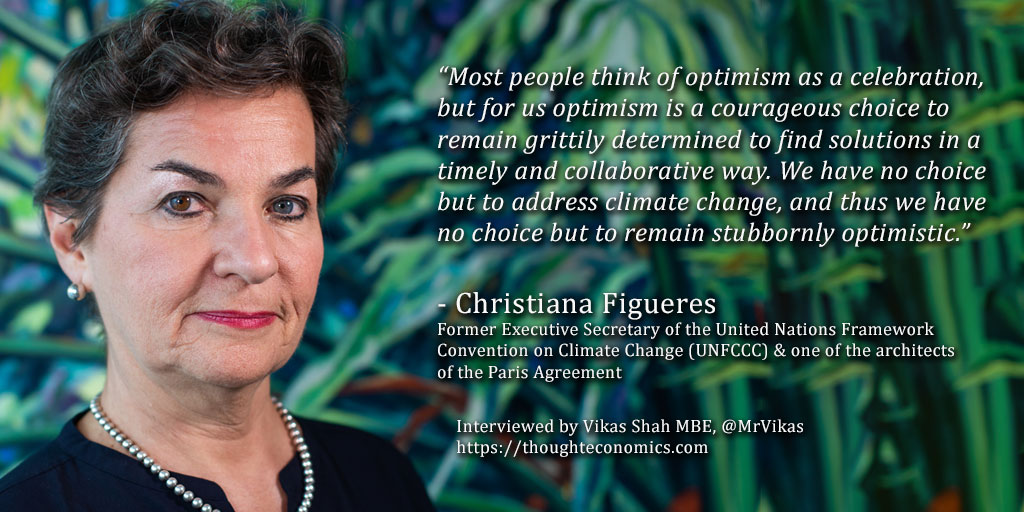 Christiana Figueres is a Costa Rican citizen and an internationally recognized leader on climate change. She was Executive Secretary of the United Nations Framework Convention on Climate Change (UNFCCC) from 2010 to 2016. During her tenure at the UNFCCC, Ms. Figueres brought together national and sub-national governments, corporations and activists, financial institutions and NGOs to jointly deliver the historic Paris Agreement on climate change, in which 195 sovereign nations agreed on a collaborative path forward to limit future global warming to well below 2°C, and strive for 1.5°C, in order to protect the most vulnerable. For this achievement Ms. Figueres has been credited with forging a new brand of collaborative diplomacy and received multiple awards. Ms. Figueres has continued to accelerate the global response to climate change. Today she is the co-founder of Global Optimism, co-host of the podcast “Outrage & Optimism” and is the co-author of the recently published book, “The Future We Choose: Surviving the Climate Crisis.

In this exclusive interview, I spoke with Christiana Figueres about her lifelong commitment to building a sustainable future for our planet.

Q: Where did your passion for fighting climate change come from?

[Christiana Figueres]: I was a young mother with 2 small daughters and saw that the planet I was bringing my children into was one that was already severely diminished compared to the planet I received from my parents. How can any parent want their children to inherit a planet that’s worse than the one they received?

All life on this planet is interconnected and dependent on each other, and the fate of our children is therefore linked to the fate of the natural world, the flora and fauna of our planet.

Q:  Why are we seeing so much climate denial in our world?

Q:  What are the most urgent changes we need to move our climate to sustainability?

[Christiana Figueres]: The tasks at hand are pretty simple to state, but much more difficult to implement. Science tells us that over what remains of this decade, we have to cut our greenhouse gas emissions by 50%. It is a clear, quantifiable target – not just in terms of the emissions, but also in terms of a timeline. It’s achievable too but requires a reduction in emissions like we’ve never seen before (apart from the lockdowns of this year). We have the technology to get there, capital shifts are starting to take-place, and slowly we’re seeing policy movements too. It’s not as quick or as radical as we need, but it’s starting.

Q:  Do we have the economic incentive to build a sustainable future?

[Christiana Figueres]: The most powerful incentive that could be used to incentivize economies would be a universal carbon price. That would accelerate decarbonization quite dramatically.

Today, you also have a growing number of organizations that are decarbonizing their products, services, manufacturing, and value chain. Decarbonising is better for their bottom-line and is also being demanded by clients and customers who are increasingly passionate about environmental and social responsibility. In what will (hopefully soon) become the post-covid world, there will be a huge expectation that corporations not only refrain from doing damage but actively move into the solutions phase, assuming their collective responsibility in bringing about the environmental solutions we so urgently need.

Q:  What is the link between climate change and human rights?

[Christiana Figueres]: It’s sad that we don’t immediately see the profound injustices embedded in climate change. It is precisely those people who have no responsibility for having caused climate change (because they don’t have, or cause, emissions) who are the most vulnerable to the negative impacts of climate. They are in highly vulnerable countries and are some of the poorest people in the world. They are often under the poverty line and bear a disproportionate impact of climate change.

There is also the intergenerational injustice of climate change. Young people growing up today definitely didn’t cause climate change, yet they will feel a huge amount of the impact. The same is true of women, who often carry roles in society which make them more vulnerable to the impact of climate change yet have rarely caused it.

If you view the world from a moral perspective, you have no option but to address climate change in a timely fashion. The good news is that the moral imperative is backed-up by economics, technological advance and capital shifts and that means we no longer need this to be an ‘either-or’ argument.

Q:  Why are attitudes towards climate change different in the global north and global south?

[Christiana Figueres] In the American continent, we’ve had incredibly destructive, unprecedented, hurricanes but we have greater resilience and stronger infrastructure. The destruction experienced from climate events in the global north is perhaps not as profound as the global south and can be countered with financial instruments such as insurance and more integrated social protection networks to support rebuilding and health. While it’s true that industrialised nations have been hit by climate change, they come-back faster than their developing world counterparts.

It’s also true that those countries in the equatorial-belt (15 degrees North and South of the equator) are also those which will be most hit by climate change due to increased temperatures leading to desertification and hydrological damage. Those are also the countries which tend to not have the financial and social resilience, and thus are hit on all sides.

[Christiana Figueres]: We have to get to a world that is powered by clean, efficient, smart and interconnected energy sources. We need ubiquitous cheap energy and must bring it to the millions of people that are still under the poverty line and for whom clean energy grids and transmission systems are unaffordable. We have to power our economic growth through clean, well distributed, ubiquitous energy and that will take a revolution in energy generation, storage and transmission. It’s also critical that we get to the point where transport is not so polluting and- indeed- becomes efficient and interconnected. We have to move away from the archaic and inefficient support structures in the economy to clean, efficient, smart levers.

Let’s start with a dose of realism, no human endeavour goes without leaving a footprint. Many institutions have- however- quantified that this year, we have seen a reduction in global emissions of 8% through the stoppage of air-travel and production. The alternatives such as video-conferencing and digital communications do use energy hungry data centres, but increasingly those are moving towards renewables and are extremely efficient. None of us are angels, moving around without leaving a trace, but we can be more conscious and more intentional about our footprint. This year our footprint has gone down, but that has come at a huge human cost. There’s no way we can aspire to decarbonise the way we have done this year, that’s not responsible, the human cost cannot be sustained. We need responsible decarbonisation that creates jobs, creates wellbeing, and leaves the climate net better at the end.

Q:  How can we remain optimistic about the future?