Could Greece End the Euro? 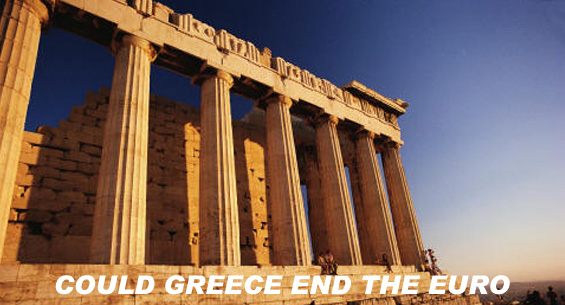 As I write this, my Bloomberg feed shows that, “Euro-region leaders [have] ordered Greece to get the bloc’s highest budget deficit under control and said they are prepared to take “determined” action to staunch the worst crisis in the currency’s 11-year history.”, with the FT adding, “Under an agreement hammered out in last minute negotiations in Brussels, the 16-country eurozone stopped short of providing immediate financial support for Greece, but gave an implicit assurance to help Athens if it encountered problems in refinancing its sovereign debt later this year.”

For most countries, it has become part of normal economic operations to raise money on the international money-markets through the issuance of sovereign bonds.  These bonds are typically seen as “risk free” given they are underwritten by a government which (notionally) should have the assets and reserves to repay the principal (face value of the bond) plus interest when required.

The introduction of the Euro brought great advantages to countries across the Euro-Zone by ‘levelling out’ the effects of unpredictable inflation, and other country-specific economic factors, and allowed nations to issue debt in Euros, which (notionally) should reduce the risk on the debt, and make it cheaper to service (insofar as the country issuing the debt would not have to pay as much interest).

This theory works wonderfully when economies are growing and times are good, but at a time when the world has (for now) averted a precipitous depression, there will invariably be huge pressure on countries, particularly weaker members of a system (in Europe’s case, the PIGS – Portugal Italy [or Ireland] Greece and Spain).  These pressures have manifested with huge budget deficits, combined with reduced industrial output, spending and other factors for growth.

The net result has been economies which are getting close to default, meaning that they could (in theory) be unable to repay the bonds as they fall due (a similar worry the international community had for Dubai a few months ago).

The concern here is that a Greek default would trigger a loss of confidence in Euro, as investors would assume that other economically stretched economies (Portugal, Italy, Ireland and Spain) could follow.  The fact remains that Greece only accounts for 2.6% of euro zone GDP, and even when combined with the rest of the PI(I)GS, Europe could (in theory) withstand a Greek default.
The facts remain, though, that in a highly emotive and risk-averse market, rationality seems to fall by the wayside, with investors trigger-happy to pull immense volumes of liquidity (cash) out of assets at the earliest risk warning.

Politically and practically, the Euro Zone nations cannot be seen to bail-out Greece.  Not only would this set a potentially dangerous precedent, but it could also affect the overall financial stability of the system itself.  Instead, ministers have agreed to ‘support if required’ and have begun working closely with the Greek government to help them create policy solutions to reduce the debt burden.  These measures should, in theory, allay investor fears (at least in the short term).

The “Greek Situation” has, though, revealed one of the most prevalent factors facing developed world economies.  Our nations cannot exist independently, we are intrinsically linked to the global economy, and another-nations problems will, invariably, affect us.  Hopefully the warning-shot of a potential Greek default will create the basis for further discussion between nations to create more integrated economic policies.

Life Learnings from Being Held Hostage for Six Years in the Colombian Jungle – A Conversation with Ingrid Betancourt.

A Conversation with Ece Temelkuran on the Choices We Need to Make, Together, For a Better World.

On the Role of Death in Life: A Conversation with Sheldon Solomon

Up Next: Who Are We?