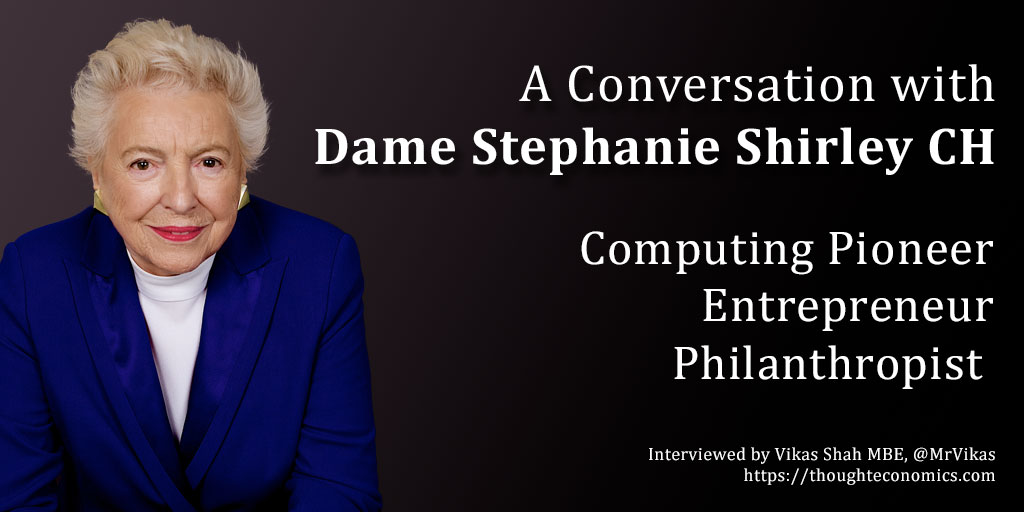 Dame Stephanie Shirley CH, also known as Steve, is a workplace revolutionary and successful IT entrepreneur turned ardent venture philanthropist. At 88 years old, her story has many strands which, woven together, have produced a lifetime of exceptional achievements.

Dame Stephanie’s story begins with her 1939 arrival in Britain as an unaccompanied five-year-old Kindertransport refugee. This defining experience equipped her with fortitude at a very young age and made her determined to live a life worth saving. In 1962, she started a software house, Freelance Programmers, and pioneered radical new flexible work practices that changed the landscape for women working in technology. She went on to create a global business and a personal fortune which she shared with her colleagues, making millionaires of 70 of her staff at no cost to anyone but herself. Since retiring in 1993, Dame Stephanie’s life has been dedicated to venture philanthropy in the fields of IT and autism. She initially founded Autism at Kingwood in 1994 to support her late son Giles, then there was the ground breaking Prior’s Court School for pupils with autism and her charitable Shirley Foundation went on to make grants of £70 million. It spent out in 2018 in favour of Autistica, the UK’s national autism research charity founded by Dame Stephanie. In 2009/10 she served as the UK’s first ever national Ambassador for Philanthropy. In 2017, Dame Stephanie received a Companion of Honour (CH), a membership limited to only 65 individuals globally, for her services to entrepreneurship and philanthropy.

Dame Stephanie’s memoir Let It Go was first published in 2012 and re-published in 2019 for worldwide distribution. During lockdown in 2020, Dame Stephanie produced her second book, So To Speak, a remarkable collection of 29 of her speeches given over the last 40 years. All proceeds from the book go to Autistica.

In this interview, I speak to Dame Stephanie Shirley CH. We discuss her remarkable life story from arriving in Britain as five-year-old war refugee, to building one of the UK’s most successful information technology companies, changing the landscape completely for women in technology, and her work as one of the UK’s most prominent, and impactful philanthropists.

Q: Where did your resilience come from?

[Dame Stephanie Shirley]: In a sense, everyone is formed by their early years, and that’s certainly true for me. My early experience as an unaccompanied child refugee on the Kindertransport brought me to England in 1939, evading Nazi Europe. That really had an enormous impact on me, everything was different. My previous life stopped, and a whole new life began with a new (foster) family. I had to learn a new language, a new country, new food, new everything. It was such a big change, that change doesn’t throw me anymore. I’ve learned to enjoy change, I like to do new things, make new things happen. I’m sure all of this is linked to my Kindertransport experience. I’m also very conscious that my life was saved, and I decided, very early on, to make mine a life worth saving. I know that sounds very pious, but it’s driven me. I don’t fritter my days away. I try to do something worthwhile each day, and with that I’ve become a very happy person. That hasn’t always been the case; I’ve had mental health problems before, but the past 10-20 years have been stable, and I’ve been able to enjoy the benefits of the wealth that I created.

I’ve noticed that wealthy people don’t build resilience often because they think they’re protected by their money. To a certain extent, this is true. As the money goes however, there’s no strength… there’s no kernel behind the money that allows them to see through the problems of life. We all tend to envy wealth, ‘…if I had this or that, it would be so much better,’ and of course, that assumption is not true at all. Your happiness comes from inside.

Q: What does it mean to you, to be successful?

[Dame Stephanie Shirley]: For me, success is about harmony, and it has several dimensions. The classic three; intellectual, physical, and spiritual – when those three are in harmony, I feel my life is a success. Every now and again, one of them gets out of kilter. Money isn’t really a part of that. Many people use money as a measure of success, not as their umbrella for a rainy day. Certainly, my foster parents were like that – and it put me off business because there was so much emphasis on money (presumably because they were short of it). As a child, there was a lot of discussion about money, but also importantly that education was critical to get out of poverty.

Q: What advice would you give to those fighting for change today?

[Dame Stephanie Shirley]: Looking back, there were two things that made change possible for me. Firstly, I lived the change. My company was a way of, as they say, ‘scratching my own itch.’ I wanted to be able to go on working myself, and I realised that a lot of other women would have had comparable aims and desires. I’m continually proselytising that there’s always something you can say on behalf of women. I believe in the sisterhood of women (which is a bit unfashionable nowadays). It’s a question of going on and realising the small things, and big things you can do.

We recently had this exceptional success in women’s football. Whilst I don’t follow football, this felt like an important moment in the emancipation of women. Those girls wanted to do something that people said they couldn’t, just because of their gender. It’s an ongoing battle.

Nowadays, I have broadened my campaigning to include autism (which was my late son’s condition), but also diversity in the widest sense. I talk a lot in public about diversity issues in business, and the value of diversity especially in regards innovation. If businesses aren’t innovative, they won’t survive!

Q: Has our changing attention span changed how we go about making change?

[Dame Stephanie Shirley]: Partly through information technology, our attention spans have become much shorter. The average attention span before we flip onto something else is incredibly short, sometimes in seconds. We hop around more in our minds now, rather than being studious and considered. We used to stop and think about a problem or question before responding, and now we feel obliged to respond immediately on email.

Social trends are slow to change, sometimes it takes generations. International Women’s Day was honoured for the first time in 1911; and in the UK, women got the vote in 1928. It’s been almost 100 years since these events, and I’m still signing petitions where the rights of women have been subverted.

Q: How do you approach your philanthropy?

[Dame Stephanie Shirley]: Philanthropy is very much like business, there’s not such a huge difference. People think of the skills of business and philanthropy as being different, but I see them being similar. In business you have a mission statement, in philanthropy you have a vision. I concentrate on things that are pioneering and strategic, in the two areas that I know and care about the most – information technology and autism. Every now and again, I will do something outside that, but those are my drivers. The Shirley Foundation (which is now spent out) focused on autism and information technology for some years. When many others started supporting information technology with- for example- computers in schools, we stepped back and focused on autism. I believe in philanthropy we want to do things that give back as much as we give, otherwise it doesn’t have permanence. Certainly, I get so much from my philanthropy that I have something to get up for every morning, which women of my age don’t normally have.

Q: What were some of your key learnings about the struggle of leading a scaling business?

[Dame Stephanie Shirley]: As the business grew, it changed, not necessarily for the better. In the early days, I found myself running a difficult, volatile business which was limited by geography to the extent that I wasn’t mobile. I found I had years where I really didn’t enjoy it- and certainly the more successful the company became, the less I enjoyed it.

What I pride myself on is that I did eventually manage succession and get it run by professional managers who did a much better job with it than I did. But it took me 11 years to do that transition. I started those 11 years quite late, and it was only at the third attempt that I got what I wanted, and that was a corporate style without losing the entrepreneurial drive. And I found somebody who really could do that. And she was a conventional corporate manager.

I found it difficult to let go of the day-to-day. I did eventually manage it with a very formal handover. I had a year where I introduced our new CEO to all the people that I thought she needed to know. I class it as a success that it floated under her leadership and not mine. I’d retired by then, and I must say I was quite glad to have done.

I always tried to run my business in a humane way. I had this idea of business being tough and harsh, and thought I could build a business that was humane and kind. It made quite an impact to how I ran the business, especially as it scaled. It had this momentum outside of me, and that meant the business could- if unchecked- go off and not do the right thing. Performance metrics and KPIs are relatively straightforward to follow, but doing the ‘right thing’ is not nearly so clear cut.

Q: Where do you find hope?

[Dame Stephanie Shirley]: I had a religious upbringing, a ‘mild’ Church of England. We went to church at Easter and Christmas, that was about it. I was taught Church of England stories and so on. I have good genes, and lots of energy. It’s much easier to be energetic and hopeful when you’re feeling well. Certainly, when I was depressed, I did everything very dutifully- but I lost that flair for life.

What I’ve come to realise is that I can never truly experience many of the ills of the world, and nor would I want to experience them. I don’t know what it’s like to be black for example, and to feel the injustice that black people face through racism, but that doesn’t mean I can’t align myself as strongly as a charity ally with their cause. Young people see philanthropy and change completely differently – they don’t support charities in the same way as I do, but they campaign and that’s perhaps more valuable. The money is less important now, and the drive is the focus, the talking, the doing.

Up Next: Rand Fishkin’s Painfully Honest Field Guide to the Startup World