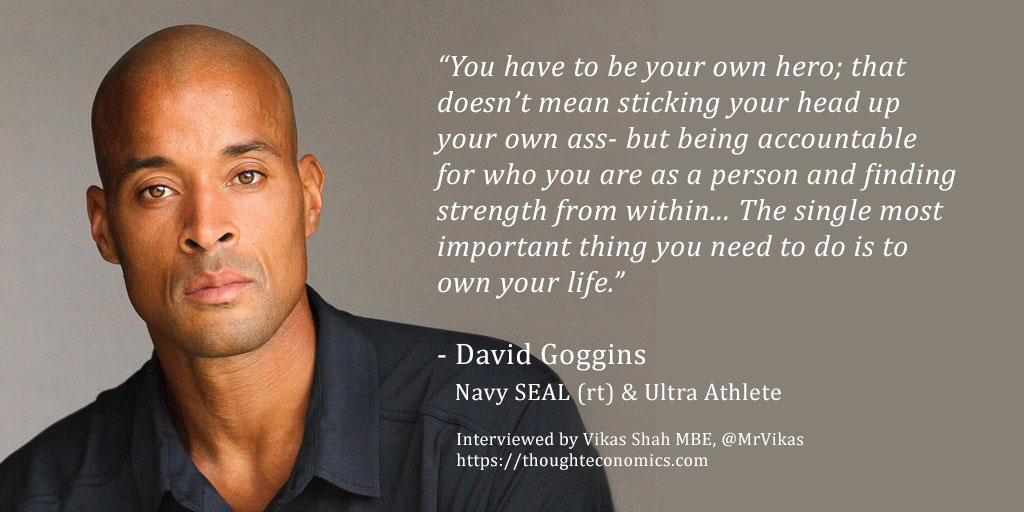 David Goggins is a remarkable man.  By his own admission, he should have been a statistic. “Life dealt me a bad hand,” he notes in his 2018 book Can’t Hurt Me,  “I was born broken, grew up with beat downs, was tormented in school, and called ni***r more times than I could count.  We were once poor, surviving on welfare, living in government subsidized housing and my depression was smothering. I lived life at the bottom of the barrel, and my  future forecast was bleak as f**k.”

The poverty David experienced was absolute.  It was not just poverty in a literal, financial sense- but in the all-encompassing sense, a poverty of hope.  “Very few people know how the bottom feels…” he notes, “but I do. It’s like quicksand. It grabs you, sucks you under and won’t let go. When life is like that it’s easy to drift and continue to make the same comfortable choices that are killing you, over and over again.”

With this back-story in mind, let’s turn to the David Goggins of today, a retired Navy SEAL and the only member of the U.S. Armed Forces ever to complete SEAL training, U.S. Army Ranger School, and Air Force Tactical Air Controller training. A man who has competed in more than sixty ultra-marathons, triathlons, and ultra-triathlons, setting new course records and regularly placing in the top five and who held a Guinness World Record for completing over 4,030 pull-ups in just seventeen hours.

By any measure David’s story is a testament to resilience, grit and the fight to achieve, and I caught up with him to learn more about his story.

Q:  How did your childhood impact who you are?

[David Goggins] My childhood had everything to do with who I am today.  Growing up, there were two different David’s; one was the weak kid I thought I was, and one was the tough individual I really was.  I came from a very abusive upbringing, and getting beaten up like that as a kid- often for no reason- beats that courage and confidence out of you; replacing it with insecurities and issues that you have to overcome.

Q:  What prompted you to change in your life?

[David Goggins] Change came to my life over several periods; when my Mom finally left my father and we went to a new town, I skipped school a lot- I had a learning disability and I didn’t realise how insecure that made me.  I also stuttered severely, and my Mom worked 3-4 jobs at a time and was never home.  It was a hard period in my life, and I realised that I had to figure a way out.  Around the age of 16, I realised that nobody was coming to save me – so I learned to read and write (I had about a 3rd or 4th grade reading level in high school junior year which I hid from everyone, even my mom) and that didn’t get discovered until I was trying to join the military.  I cheated on everything at school and when I went to sign-up, I didn’t realise that you had to take a test that was a bit like an SAT; so I went in there to take it, got my best friend to come so I could copy off him- but guess what, we had different tests.  My secret was out.

My childhood, my physical abuse from my father, all this stuff came to light… I had to start learning myself until my Mom had enough money to get me a tutor for one hour a week for the next six months… I wen tot the store, I would buy spiral notebooks, and memorised textbooks….  I had to learn how to learn.

My next big change came when I finally got into the air force where I realised that I was terrified of water.  That crushed me and I gained weight; from 175-300lbs and retreated into my shell.

Fast forward to when I was 23/24, I was going nowhere.  I was almost 300lbs, and was spraying cockroaches to pay the bills.  I came home one day from work at 7am and saw a TV show about Navy SEALs; it made me sit down and think about how badly I always ran from my fears, and how I had to start facing them because nobody was coming to help me.

Q:  How to you quiet the voices in your head that say you can’t do something?

[David Goggins] You have to go into a very quiet place in your mind, away from the noise of the world, the noise of doubters, insecurities and your own self.  You have to quiet your disbelief and create open mindedness to your own ability to succeed and overcome.

Q: What is the role of mental toughness in your life?

[David Goggins] Back in the 90’s, we didn’t have the language of mental toughness.  I came upon it on my own, I had to build what we now call mental toughness by persevering over myself.  I had to beat the voice we all have that protects us, and make it realise that I was capable of more.

To succeed in life, I became a master of my mind – and realised that my mind, like yours and everyone else’s, will always choose the path of comfort. We only have so-much bandwidth in our heads, and so when it comes down to the really hard stuff, our mind is like, ‘you know what man? I don’t have time for this…. I don’t want to deal with this right now…..  I have bills to pay, I have other problems…’

Our minds shove things in front of us that get in the way – insecurities, fears, problems.  But guess what, I was afraid of my own mind.

If you’re afraid of heights, you should go up high; go to high places every damn day and figure out why you’re afraid.

I had to reprogram my mind so that it no longer had the tactical advantage over me.

Q:  How do you prepare your body for extreme endurance?

[David Goggins] To do the impossible, I had to be open-minded.  Before I broke the Guinness World Record for the most pull-ups in 24 hours, I was talking to a few people who told me the record was 4020.  I saw this as a number and went to the lab in my brain to figure out how it could be achieved.  I don’t see things as impossible; I got right to the equations to figure out how this could be achieved; I didn’t put a barrier on my mind or body.  Remember, I’m a practitioner not a theorist.

A practitioner is the person who goes out and breaks the limits of the mind, the soul, the body.  A practitioner listens, and understands that the voices who say things cannot be done are theorists.

Nobody knows how far we can go as humans and so I listened only to myself and my body and pushed it to go beyond perceived limitations, and guess what – outside that boundary is a whole new life where you really start to live.

Let me tell you about my first 100 mile race.  I wanted to qualify for the Badwater 135; a 135 mile race through Death Valley in the summertime.  I called the Race Director and said I wanted to run to raise money for a foundation.  I didn’t know that you had to run 100 miles in under 24 hours to qualify for the race, and at this point, it’s Wednesday and just 3 days later on Saturday, without any training, I was about to run 100 miles.  I had to draw on everything I had and the last 60 miles of that race was all mental; I had to deceive my mind tactically to get over the pain, the exhaustion, the fear, and I completed it.  My body started failing my mile 70, my kidneys failed and I broke the metatarsals in my feet, but I finished.

Q: What inspires you?

[David Goggins] We have amazing people out there doing amazing things, but we live in a world with very few leaders.  If you look at those in politics and in positions of power, we have lots of selfish people, and very few leaders.

You have to be your own hero; that doesn’t mean sticking your head up your own ass- but being accountable for who you are as a person and finding strength from within.

Through this journey I’ve left a lot on the table.  I was 300lbs, I was at the bottom of the sewer, I was broken and I look back and think, ‘wow, I could have easily stayed there,…’  nobody came to save me, it was in me to save myself.  We all have that power, we just have to find it.  You have to keep exploring the capabilities of your mind to see what you have left, to see what’s possible.

Q:  What is the role of failure in your life?

[David Goggins] I need failure like I need air.  Unless people understand what failure is, they can’t grow.  I find growth in suffering, in pain and in failure.

If you want to achieve you have to put yourself out there and make yourself vulnerable.  You have to be vulnerable to succeed.  When I tried to get the pull-up record the first time on the Today Show, I failed miserably in front of millions of people- I managed 2500 pull-ups and was aiming for 4020.  I had to go back to scratch and figure out the right equation; because everything in life has an equation- your mind, your body, your soul.   I don’t think about if I can do something or not, I think about how I can do it.  It may take me 10,000 attempts, but I will find the right equation- maybe with nutrition, sleep, training, studying, or all the above.  There was an equation to get man to the Moon.

Through my life I’ve started realising that when I fail, it means that i just haven’t figured out the right equation for success.

Q: What advice would you give to the next generation?

[David Goggins] The single most important thing you need to do is to own your life.

If you go on social medial, everyone is just bragging about how great they are.  You cannot live in this world, you have to be vulnerable, to show yourself as you are.  That’s where that glow comes from.

If you’re fat, say you are – own it and then change it if you want to change.

If you’re not the smartest – it’s ok to say that – you have to call yourself out and change, if you want.

You have to be willing to call yourself out, not just for the better. There is no growth in making yourself feel better- being better comes from conquering yourself, and that starts with calling out who you’re not.

You must call yourself out for who you’re not, and that’s where you start to grow.  That’s where you can really fix the problems in your life when you recognise that.

A Conversation with Gary Hamel, The World’s Leading Expert on Business Strategy

On Race: A Conversation with Dexter Dias QC

A Conversation with Afua Hirsch on Race, Identity & Empire

A Conversation with Jacqueline Novogratz, Founder of Acumen

Up Next: David Blaine: The Magic of Making the Impossible, Real.