Dictators, Democracy and Some Home Truths… 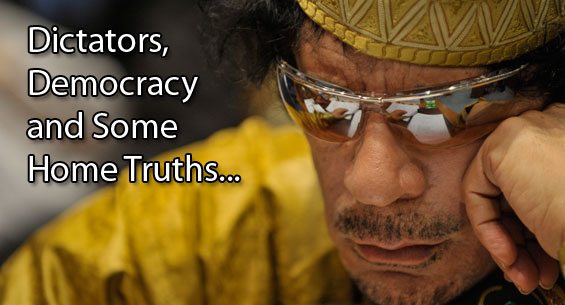 As Foreign Policy Magazine reports, “Equatorial Guinea’s economy depends almost entirely on oil, which generated revenues last year of well over $4 billion, giving it a per capita annual income of $37,900, on par with Belgium.” While this has given the country’s ruler (Teodoro Obiang Nguema Mbasogo) an estimated net worth of over $600m (which in reality will be many magnitudes higher) it has left the population impoverished with one in three dying before the age of 40 and a US State Department Report citing problems including (but not limited to): “…limited ability of citizens to change their government; unlawful killings by security forces; torture of detainees and prisoners by security forces; life-threatening conditions in prisons and detention facilities; official impunity; arbitrary arrest, detention, and incommunicado detention; harassment and deportation of foreign residents with limited due process; judicial corruption and lack of due process; restrictions on the right to privacy; restrictions on freedoms of speech, press, assembly, association, and movement; government corruption; violence and discrimination against women; suspected trafficking in persons; discrimination against ethnic minorities; and restrictions on labour rights….”

While the country suffers such problems- the ruler’s son lives in abject comfort, enjoying a $30m home in Malibu (California) with a $10m fleet of cars (including two $2m Bugattis) and a playboy lifestyle.  As Foreign Policy Magazine continued, “Many African regimes have degenerated into kleptocracy, but Equatorial Guinea’s corruption is so entrenched, scholar Geoffrey Wood has written, that it “is one of the few African countries that ‘can be correctly classified as a criminal state.’”

Equatorial Guinea is by no means a unique case.  Many nations throughout the world suffer incredible wealth disparities, corruption and social issues caused by dictators who control natural resources or have a vice-like grip on the political system.

In countries such as Equatorial Guinea (and their counterparts) the curtailment of these freedoms is absolute (across all dimensions) and in other countries such as Libya, Egypt and Bahrain- the despotic incumbent regimes  employ tough methods to subvert basic freedoms, not only overtly but in many cases (such as Libya) with a great deal of pride! In a recent speech, the Libyan leader stated, “When Tiananmen Square happened, tanks were sent in to deal with them. It’s not a joke. Do whatever it takes to stay united… People in front of tanks were crushed. The unity of China is more important than those people in Tiananmen Square.  Anyone who undermines the constitution shall be put to death”

The international community has, in most cases, stood by and watched these despots- benefitting from ‘close diplomatic relationships’, with the populations of these nations only able to respond to their oppressors once technology and media gave them the tools and the voice to be able to do so (as we investigated in a recent article entitled ‘The Truth about Democracy‘)

In the ‘liberal’ western world- these revolutions must also make us question our own democratic environment.  We can, for example protest freely and elect our leaders but the fact remains that when it comes to critical decisions about the running of our country such as who we go to war with, how our taxes are utilised, how our lives are ‘managed’? we have little (if any) ability to input and influence the end decisions.  As Wikileaks and their counterparts have revealed on many occasions- the ‘moral high ground’ of foreign policy as a concept has been all but obliterated with the discovery of corporate and other financial objectives being placed paramount above the well-being of populations.

In what kind of democracy can laws exist that allow information to be so suppressed? In what kind of democracy can a wealthy group (effectively) ruin an economy and then use an already stretched population’s taxation income to bail themselves out- leaving hundreds of thousands of people out of work, unable to access critical services (such as childcare, health, and so forth) and (more importantly) unable to do anything about it.  This form of regime, known colloquially as “Capitalism” provides a very high degree of perceived freedom (the perception having been careful manipulated by carefully allowed liberties) while (on closer examination) restricting many of the more important aspects of a true democracy.

Against that background, we should look at firms such as Microsoft, Google and their counterparts who- through a more democratic take on capitalism and through empowerment of their staff at all levels- have grown to become some of the biggest companies on the planet, astonishingly quickly.  Google, for example, reached the same market capitalisation as General Electric (more akin to a typical hierarchical ‘democracy’) in less than a tenth of the time.  Imagine the potential if our countries were run with the same open democratic frameworks as these companies?

We need to talk…

In any relationship the words “we need to talk” rarely lead to good news.  For us, as a population, the time has come to utter these words to the individuals who ultimately exert the control and influence over our lives.   The unquestionable bravery of individuals in the Arab world, who have risked (and often given) their lives for change should inspire us to break a cycle of pseudo learned-helplessness and, instead, realise that if we want to control our destinies, we must participate in the decisions which influence them and, ultimately, make the political powers-that-be realise that contrary to their belief- they work for us….

Up Next: A Conversation with Chip Wilson, Founder of lululemon athletica