Close Search ×
Order the Book Subscribe Free
Can you rise to the top without losing your soul? A Conversation with Douglas Board. 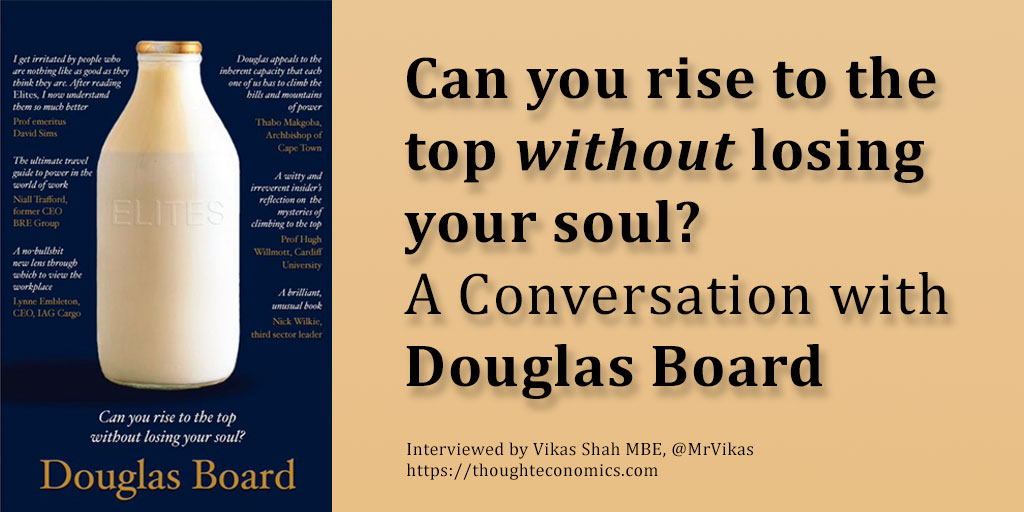 Whether it’s CEOs, political leaders and business elites – across the world, key decisions are still made by tiny coteries of people. With enough talent, elan and hard work any of us can join them.  So, we are told…  Follow key rules: Be transparent. Defer to bosses and clients. Take responsibility.  Feedback is everything.  Do these things brilliantly and the top job can be yours. But can it?

Headhunter, coach and former NGO leader Douglas Board shows that this accepted wisdom is not true.  After three decades of working with elites or as a gatekeeper for them Board shows why many of our society’s best leaders and managers ̶   ‘hidden heroes’ in the tier below the top  ̶  get it wrong. They fall at the final ascent because their expectations deceive them. They don’t fall gently: they risk burn-out.

Douglas’ new book Elites breaks radical new ground. It shows why, paradoxically, meritocracies create glass ceilings. We end up with a society-wide misallocation of respect in favour of a few at the top, which hurts us all.

In this exclusive interview, I speak to Douglas Board about the reality of ‘elite status’ in our society, and why we need a more humane world in which organisations and individuals hold in better balance the ordinariness of society’s extraordinary achievers, and the extraordinariness of ‘ordinary’ men and women.

Q: What does it mean when we speak of the elite in any given society?

[Douglas Board]: The word elite has two parents. One is around excellence, so during the lockdown we had exemptions for ‘elite athletics’ which means ‘excellent athletics.’ The other parent means exclusive, this is the club you can’t get into, for the few not the many. I’m interested in bringing elites down to earth; not speaking of them as these creatures from Mars! I’m talking about the elite who exist in your company or your sports club- they are the group of individuals with the most prestige, influence and power.

Q:  Why have we seen a backlash against ‘elites,’?

[Douglas Board]: The world is getting more complex, and people are hungry for simplicity and simple truths; in some ways the backlash can be seen as a reaction against those who claim to know more – the sophisticates, the ‘metropolitan’ elite. We also see an element of contempt linked to inequality and the class system – and political players such as Trump have used this to speak to the anger in society. Trump’s fans know he’s contemptuous of them, he’s written about that in his books, but nevertheless he does something for them – and allows them to form a connection and feel seen.

Connection is not a nice to have.  When we lose the right kinds of connections with others, we start to feel we don’t exist. Buried underneath the complexity and the contempt, there’s something wrong with how we’re connecting as a society that’s fuelling the anger we see.

Q:  How do people acquire elite status in a society or group?

[Douglas Board]: Norbert Elias was a refugee German sociologist. He studied how groups of people who lived in a small English town, of the same race, with the same religion, accent and occupation still grew up with certain notions of who they could and could not socialise with- without any conscious signal. He found that established groups were formed, connected by disagreements, feuds, love-affairs and collaborations – real connection. Without anyone instructing them, people who had connections automatically didn’t let in those who weren’t already part of the story. This isn’t about conspiracy theories, it’s about shared stories and noticing who is, and is not, part of the story.

Q: Does our notion of individualism connect with elite status?

[Douglas Board]: There is a facet of South African culture which has become known in the west called Ubuntu. Essentially western culture assumes ‘I think therefore I am’ whereas Ubuntu says, ‘I am because you are.’  In the West, we say things like, ‘human connection is very important’ and that ‘it’s important to study social dynamics’ but in reality, human existence is connection and when we lack the right kind of webs of connection with each other, we cease to exist.

[Douglas Board]: The most corrupting idea about power is that it gives you a set of techniques to enable you to get more of what you want, no questions asked. If we think about power in that way, our soul will get eroded. We need to start thinking differently, the Ubuntu interpretation would be that parts of us are hidden in others – that we will only fully exist if we explore and encounter. It’s an antidote to the extremes of power. If parts of you are hidden in the people you have power over, it can act as a counterbalance to exploitative tendencies.

Q:  How do we navigate the barriers to elite status?

[Douglas Board]: People often see barriers that may exist as they climb the ladder. Business schools are one such example – part of the reason why people attend elite business schools is the web of alumni connections and brand that come with it. Let’s imagine you are someone who comes from a business school which- from the outside- is perceived as being second tier or lower. You get a job at an investment bank, but you are now surrounded by people from Harvard and INSEAD. In that situation you need to make sure you break your approach into chunks. One part will be about commanding intellectual respect and not succumbing to their perception of who is or is not more intelligent. But then it’s about you being confident, communicating well, using the right body language, and making connections that allow you access to the networks you want to be a part of. Many people in prestige networks are decent people, if you impress them and connect well, they will introduce you to their friends.

For people of colour and women there are some really hard additional obstacles they may face. I don’t ever want to belittle the experience of those individuals, but it’s really important to realise that in any such situation you can break down a situation to see what your options are to get ahead.

Q: How can we construct a view of how meritocracy works as a social structure?

[Douglas Board]: To help people understand these structures, I use the analogy of magic. I paint this picture of a theatre hosting a magic show. There’s a compere, there’s an audience at different levels from the cheap seats to the dress circle and the front row. Let’s say you’re early in your career, in the cheap seats at the theatre and you wonder how to have access to the dress circle- you’ll be told to work hard, take responsibility, to learn and to achieve. You go away and do that, come back, and now you’re in the dress circle – but then you wonder how you get further still, perhaps to the most comfortable private booths. You’re told the same lessons and they seem to hold good. The whole show is ultimately anchored around the wizard, a character who comes on stage one day to reveal how they got to the very top – they will tell a moving story often involving their mother, how they were taught about hard work, seizing opportunity and being resilient… it’s the age-old story! The story is told sincerely, but the cumulative effect is misleading – a subconsciously organised trick.

Q: What is the biggest mistake people make when trying to ascend the ranks?

[Douglas Board]: If I could change only one thing about public understanding of the meritocratic structures in our world, it would be to give more recognition to our hidden heroes. Suppose some aliens arrived and said, ‘take us to your leaders,’ we would take them to our political, social, scientific and other elites. Suppose the aliens instead, asked ‘take me to your best leaders’ – we may need them to meet different people – often people just below the levels we would consider as being ‘the elite.’ These are the hidden heroes of our workforce; they don’t even realise themselves that they are heroes because of the confidential nature of the work. They tend to be in the background working hard and encouraged not to wash their boss’ dirty linen in public. Imagine the benefit to society if we knew that we had more brilliant people than we think we do, and they had the self confidence that came from being recognised rather than in the shadows.

Q: What is the difference between the ordinary, and the extraordinary?

We were born to find what we can be extraordinary at, alongside leading our ordinary lives. The extraordinary life may be inside our paid work or outside it … it may be our job at a certain point in our career, or somewhere else entirely. The important thing is to find both lives and hold onto them.