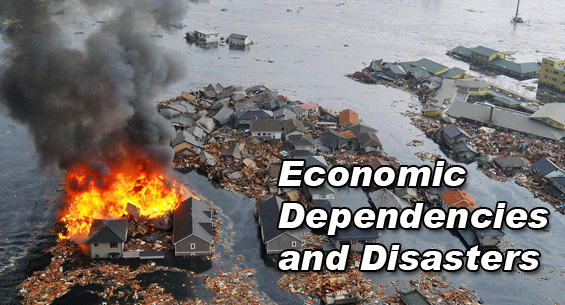 As I write today- and watch a continuing feed of apocalyptic images and video, Japan is facing its worst crisis since the devastation of Hiroshima and Nagasaki by nuclear weapons in World War II.  Over 15,000 people remain unaccounted for, 550,000 have been displaced (with almost 250,000 sheltering in refuge centres).  Japan’s Nikkei 225 has de-valued over £387 billion, and conservative estimates put the cost to the country of this quake to over £100 billion.  A number of Japan’s nuclear reactors are also melting-down, with the catastrophe being likened (by international experts) close to the severity of the Chernobyl disaster.

While Japan is an economically rich nation, the sheer scale of the destruction has (rightly) provoked the international community to offer assistance- with over 100 countries offering help.

Our global economy is highly interconnected with trillions of dollars in capital flows between nations occurring on a daily basis.  Japan, as the world’s third largest economy, holds a critical role in global markets (not least by its position as a reserve currency) and even with a Debt to GDP ratio beaten only by Zimbabwe, the country carries a strong geopolitical clout.  For the rest of the world, the economic impacts of this crisis are only starting to be felt.  Alongside immediate capital markets reactions (on currency and bonds, which the Bank of Japan has tried to offset with massive interventions) together with sell-off activity in Japanese stocks, and related global stocks (such as insurers, nuclear technology, etc) many organisations are likely to feel the pinch.  Bloomberg notes that, “Japanese companies including Toshiba, Sony Corp, Panasonic and Elpida Memory Inc, supply 20 percent of the world’s technology products, including 44 percent of audio-visual equipment, 40 percent of electronic components and 19 percent of semiconductors.”. Companies like Boeing, Ford Motor Company and many others are also fearing supply disruptions for critical components which are (in the main) used within incredibly lean manufacturing environments (meaning that disruptions are simply not provisioned for!).  Other impacts include a near-certain effect on energy prices, together with potential impact on world GDP (as Japanese demand patterns change), impacts on the prices of many consumer goods (as many use semiconductors) and the allied-economic-impacts of large scale policy revisions in technologies such as nuclear energy.

As of now, “Ninety-one countries and nine international organisations have so far offered to assist” Japan with its relief and rebuild following the quake.  If we contextualise this response.  During the conflict in Darfur, an estimated three million people were displaced and more than 200,000 (with some estimates closer to 500,000) killed.  The world stood by and watched, and the head of the UN investigating team, the Nobel Peace laureate Jody Williams, described the international response to the crisis as “pathetic“.  In a similar vein, after the 2010 Pakistan floods (which affected over 20 million people) the governments of the world were severely criticised for a lack of immediate help (which we discussed in detail in this article entitled “Why Must Some People Beg for Aid“).

So why do the world’s governments fall over themselves to offer a relatively-rich nation all the support they can, while waiting to be shamed into action assisting others? The answer to this question lies in foreign-policy.  Governments rarely do anything out of true altruism.

In my August 2010 article on the Pakistan floods, I was forced to conclude:

“The twenty million people who currently need assistance in Pakistan are not terrorists, nor of strategic importance for our governments.  They are much more important than that, they are people like you and me- men, women, families, children- who only want the best for their lives, and who were already struggling with immense poverty, even before nature yielded a blow.  These are individuals with hopes and aspirations like us, who fall in love like us, who mourn their loved ones, just like us- and so a failure to act- is a failure of humanity of such a proportion, that we should all see blood on our hands.”

The key element there is “strategic importance”.  Japan is of immense strategic importance to governments around the world.  For “developed” economies like ours, Japan is a key source of capital, goods, services and political support.  For emerging markets such as Afghanistan (where the city of Kandahar have committed $50,000 in aid) Japan is a powerful potential economic and political ally.  While a no-fly zone was instantly placed over Japan’s nuclear sites, the G8 are still debating the enforcement of one over Lybia where a despot is gunning down his own people using his air force.

A Continued Cycle of Moral Failure

Even the most untrained eye can sense the degrees of discrimination seen in foreign policy responses to natural disasters and conflict.  Discrimination which can only rationally be explained by morally abhorrent flaws in foreign-policy.

There is no-doubt that the people of Japan need our help.  The scenes emerging from their country show an unprecedented level of destruction which will take a truly global and heart-felt response to rectify.  While the people of Japan are lucky to have enough “strategic importance” to illicit an immediate international response, there are many people in the world who, while just as genetically and socially homogenous to us, fail to receive such aid.

As we struggle to take-in the true magnitude of the images we are seeing from Japan, we must therefore take a moment to also realise the structural failings in the ethical architecture of our political systems which emerge from every crisis.

We are no longer sovereign-islands protected by fortified walls and arbitrary map-lines- we are an interconnected global family who depend on each other in incredibly profound ways- and imagine, if you will, the sense of moral failure you would feel in ceasing to assist a member of your immediate biological family who was drowning, injured, or in need of immediate assistance (regardless of the circumstances).  This is the truth of our human-culture, we are one.

In times of crisis, whether through conflict or nature, it is not an option for us to assist people but an obligation.

Up Next: Taxation and Economic Self-Harm