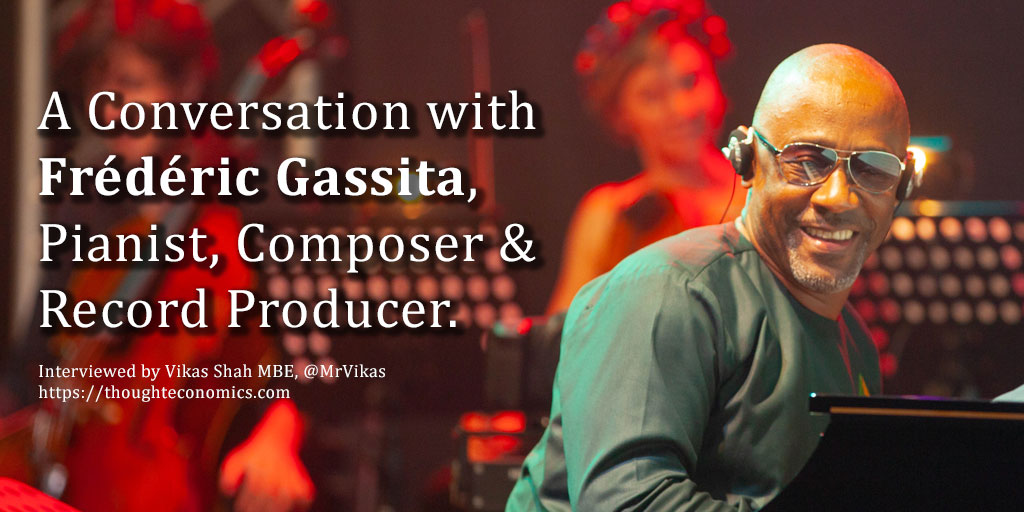 Frédéric Gassita is a Gabonese pianist, composer, and record producer best known for his musical work combining jazz, classical music, and African music. He was the third African student admitted to Berklee College of Music and the first Gabonese. Gassita is a founding member and president of the African Music Institute in Libreville. Gassita has recorded six orchestral music albums. The double album “Frédéric Gassita With The Royal Philharmonic Orchestra” includes pieces from his opuses released between 2004 and 2008, which were rearranged for the new release. “Symphonic Visions From Gabon”, featuring the London Symphony Orchestra, also a double album, incorporates African music influences.

In this interview, I speak to Frédéric Gassita about the deep connection we have with music, the power of African rhythms, the beauty of connecting genres, and what music does for us.

Q: Why is music so important?

[Frederic Gassita]: When I think about why music matters, my answer is more religious perhaps, and less philosophical. I think music is a way for God to speak to humans. We have a connection through music that we can’t find anywhere else. My wife is very spiritual, and she always tells me that when I deeply play music, she can see that I’m not alone. She says, and I feel, that I am surrounded by angels when I am in that zone. I believe that’s why music is so important for society- its connection- its healing.

Q: When did you realise music was going to be your everything?

[Frederic Gassita]: I was studying medicine. I was about to become a doctor, like my father. There was a point where I simply couldn’t reconcile that in my mind- I couldn’t think of becoming a doctor when I wanted to be a musician. That was the moment when I realised, I couldn’t do ‘this’ (study medicine) anymore, I had to pursue my love for music. I went to Boston, to Berklee college, and my new journey began.

Since I was young, I had this sense that music was going to be my life till the end. Every day, all I thought about was music. There’s not a day where I don’t wake up thinking about music, and there’s always music playing in my head. I can’t get away from that reality for me.

Q: What is unique about Gabonese music?

[Frederic Gassita]: In Gabon, music is used to communicate with the departed. We have rituals using music which are used for you to get in touch with your mother, father or son who has unfortunately left this world. Music makes the connection, and sometimes this is enhanced using some plants.

African music more broadly is about rhythm, it’s so addictive when you listen to it. People dance from 10 pm to 10 am without really stopping much – it’s not complicated harmonies, it’s about rhythm and connection. It’s like a trance – you get hooked. That’s why I want to bring that part of African and Gabonese rhythms and blend it with other musical forms; to bring that connection and healing to people all over the world.

Q: How did jazz become so important in your artistry?

[Frederic Gassita]: When I was younger, and studying music, I found jazz allowed me to be myself through proper improvisation. In jazz, you, of course, have to respect certain harmonies – but you can create your own melody and take it to another level. Through improvisation, you go deep inside yourself. It requires a high level of classical training – you need to know the foundations of musical form. Without that, you won’t be able to move your voice or your hands with the precision to communicate. Once you have that foundation, jazz allows you to go anywhere you want, you can take any genre from any country, and find your path. That’s what I did with Gabonese rhythm- we have so many different dialects and ethnic groups. Each has its own rhythm. It’s crazy!

Q: What linked your interest in sport, to your love of music?

[Frederic Gassita]: In 2002, I fell sick. I was 38, and it was a very dangerous situation for me. I was hospitalised for a week, and at the time, I used to smoke a lot of cigarettes – perhaps two packs a day. Being admitted to the hospital forced me to stop for a week, and when I got out? I decided I had to quit for good – and I needed a sport to help me with that. When I was younger, I used to play a lot of football – so that is the direction I took. I trained very seriously, and got to the point where I became professional! I was a dinosaur relative to the age of other players, the President of the Governors of Gabon called me the grandfather of the Gabonese championship, I was the oldest player!

Fitness also gave my music a new boost – when you are in the process of composing music, you go deep into your brain, and that’s why a lot of musicians get into drugs… they think it will help them get to those places in their mind. I didn’t want to do that. Playing football gave me time away from music, and when I came back, I was stronger and more physically able to play with the intensity I wanted to. We play for hours often, and sports mean I have the endurance to do this.

Q: What does music reveal?

[Frederic Gassita]: Music can reveal darkness and light. You can see this in composition. Take the Russian composer, Tchaikovsky. He was clearly a very sad man, you can feel this in his music- it’s astonishing how one human being could write such dark, sad, music. On the other side, you have someone like Mozart. He didn’t live very long, but in his time, he produced such joyful music. Music can reveal the nature that lies within us, the part of us we cannot hide. I’m not a sad person, but sometimes – for example – I can feel that way and allow people to feel it with me through my music.

When you hear a single note, a C, it’s not a single sound, it’s the result of many harmonies. When you really listen to that single note, you will hear all these other notes that make that C, it’s like God hiding in plain sight. You must open your mind to understand and feel, what music reveals. You can feel a level of grief through music about an event, like a war, that you could never feel from reading about the same topic.

[Frederic Gassita]: I hope that I can connect with people from around the world using music. I want to bring together people and genres and introduce them to Gabonese culture and rhythm. I want to take African rhythm and put it into classical music, European jazz, and symphonies. That’s what I want. I want people to come together from all over the place, through music. That’s my legacy.

Up Next: A Conversation with AJ Mendez