Inside the Dubai Mercantile Exchange 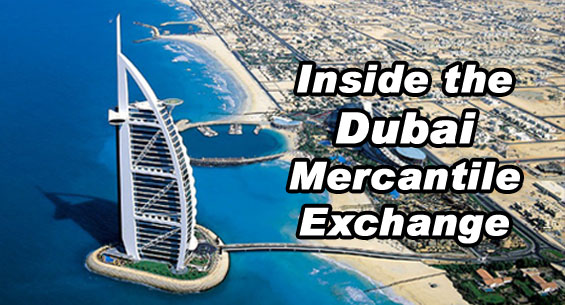 The world’s future exchanges have always been built around the needs of trade-cycles.  The gamut of participants in any commodity not only require clear and standardised pricing, but also need to be able to hedge that pricing now- and in the future.

It is no surprise that after a century of growth, the Western World has largely dominated the theatre for such markets, being the major source of production and off-take.  Globalisation has however, changed a lot of these dynamics.  Looking at just one commodity- crude oil- we see that while the United States are still the single largest consumer (at around 19.15 million bbl/day), the economies of China, Japan and India are not far behind (with a total consumption of 16.682 million bbl/day).  To contrast this, the total consumption of the European Union is around 13.7 million bbl/day.   Importantly too, these ‘East of Suez‘ markets, unlike their western counterparts, are growing – and fast.

Launched in 2007, the Dubai Mercantile Exchange (DME) has taken a unique position in the market, providing a primary energy benchmark (through the DME flagship Oman Crude contracts) for destinations East of Suez.  Growth of DME has been astonishing.  A release in August 2012 noted that, “…in 2012, trades on DME passed the 3 billion barrel mark, with a total of 3.478 million contracts (eqv. 3.478 billion barrels) traded on the Exchange and annual average daily volumes growing at an annual compounded rate of 31%…”  DME Oman is now the largest physically delivered crude oil futures contract in the world, and the world’s third official benchmark for oil trading, alongside West Texas Intermediate (WTI) and Brent.

To learn more about the Dubai Mercantile Exchange, we spoke to CEO Christopher Fix.

Christopher was previously BNPP’s Head of Marketing for Commodity Futures APAC for three years. During this time Christopher‘s desk increased its customer base in Asia four-fold, an achievement which led to the desk being named Energy Risk’s Energy Broker of the Year, Asia in 2011.

Q: What was the rationale behind the creation of the Dubai Mercantile Exchange?

[Christopher Fix] In terms of geography, it makes a lot of sense to be positioned on the world’s largest set of petroleum reserves- which face the fastest growing demographic.

In a bit of a unique proposition, this exchange was created before the ecosystem existed.  When you look at the growth and development of WTI, you have Houston which has production, New York which provides financing, the refineries on the Gulf Coast, the traders, marketers, banks and many other pieces of the puzzle which are already there.  The DME was a bit of a unique experiment, we created an exchange before all parts of the ecosystem were in place.

There was a strong need for an exchange in the region.  The original founders- Dubai Holdings, Oman Investment Fund and New York Mercantile Exchange recognised that, and formed the exchange in 2007.

Q: What was the rationale behind the DME Oman Crude Oil Futures Contract?

[Christopher Fix] The market definitely recognised and endorsed the need for a new benchmark.  WTI was certainly disconnected from the pricing and economic activity of the rest of the world.  Further to this, Brent is great for the North Sea and European trade flows, but it does not impact or reflect the actual activity in the far east.   Even though Brent has been successful in terms of becoming a larger and more liquid benchmark, it is the ‘least worst‘ option.  It is not because the crude grade (which happens to be a light-sweet crude) or supply is present physically in this market, the DME Oman contract is physically present in the market, and has better relevance in the trade flows for the East of Suez market.

Q: Did market participants East of Suez want better price discovery and transparency than existing exchanges could offer their markets?

[Christopher Fix] The market recognised the need for transparent and open pricing mechanisms.  That’s what DME offers.  You have the crude grade from our partners in Oman, and a market interested in buying.  The manner in which the trade takes place distinguishes us from other areas of the market.  We have open and transparent pricing through our futures exchange- that means price is determined by buyers and sellers and not an ‘official‘ selling price set by a producer.  In that regard, it’s unique and filling a need that is not currently serviced East of Suez.

Q: Who are the key participants in the market, and how are liquidity conditions in the curve?

[Christopher Fix] We have between 30 and 50 of the largest players in the market trading Omani contracts on a monthly basis.  That’s a good split between national oil companies (such as the Chinese oil majors), the large traders (such as those in Geneva and Singapore), refineries (we’ve just added Reliance Industries – who are not just India’s largest Oil company, but own the world’s largest single refining complex) and more.  There’s a strong balance between those entities in our market.

While our front-month certainly has the highest liquidity, we are now building good liquidity out 6-7 months in the curve. That’s something that’s been happening in 2012.  Those players are now actively participating- they have needs to hedge further than just the front-month, and are putting pricing on the screen and tightening their offers.

Q: What has been the impact of geopolitical and economic instability on your exchange and contracts?

[Christopher Fix] In our part of the world, there will always be some kind of uncertainty.  The market accepts and endorses that our physical oil is delivered outside The Strait of Hormuz, we’re also not subject to any destination restrictions as Oman is not part of OPEC.  We have a stable medium-grade supply of sour crude and many buyers are interested in having security over this supply, and hence they use DME.

Some of the regulatory issues impacting the market have an upward trend potential for DME.  We already provide all the things that regulators look for in terms of transparency and price-discovery.  That means that as futures become a bigger part of people’s trading books, we anticipate having a greater role to play.

Q: What are the key future opportunities for Dubai Mercantile Exchange?

[Christopher Fix] We’re very interested in reflecting anything that captures the price formation of eastern trade flows.  We recognise the market has tremendous interest in how they’re going to get exposure to the East of Suez dynamic.  China for example, aims to increase their buying by 400,000 barrels a day  in the last quarter of 2012, and will be adding over 750,000 barrels of new refining capacity.  That economic engine is still turning, but what people want is to be able to price that trade-flow.  The DME offers that as 40% of our crude goes to China… we’re very integral into the refining complex and buying patterns East of Suez.  Any other products that can fit into that complex are of interest to us.

Q: Do you feel there is a demand for non Euro or US Dollar denominated contracts in the region?

[Christopher Fix] We’ve not heard that.  Just last week, we finished-up seeing all our major clients.  We did a road-show to engage them in the future direction of DME.  No customers specifically mentioned they wanted different currencies denominating our currencies.  As I said before however, if that’s something the market wanted to see, we would look at it.

Q: What has been the attractiveness of Dubai as being a regional financial hub?

[Christopher Fix] Dubai offers a lot.  We’re currently at the Dubai International Financial Centre (DIFC).  There’s a separate jurisdictional regime in this area meaning that companies are treated under English common-law principles (which have been adopted by Dubai Financial Services Authority).  It’s a very safe environment for transactions to occur, and this gives us a big advantage of areas which simply do not have that framework.

In terms of finance… the Middle East is growing at a very rapid rate.  There’s a lot of money in the region from 40 years of selling oil to the rest of the world.  There’s certainly the financial resource to push contracts like the DME Oman contract into the world stage.  Dubai also attracts a lot of talent, some of this is due to the Arab Spring, but a major factor is our time-zone- sitting between Europe and India- making it extremely friendly for trade.

There’s a lot of reasons to be in Dubai, and we’re very happy to have this partnership with DIFC and Dubai Holdings.

For risk managers, it is essential that the tools used to model and hedge risk reflect the true underlying characteristics of the markets in which they participate.  Exchanges such as the Dubai Mercantile Exchange and their counterparts are creating new benchmarks and pools of liquidity which not only allow trade to be priced more efficiently, but also allow market participants to work with instruments that accurately represent their economics, rather than making do with the nearest-alternative.

Investors can learn a lot by following the trades made in emerging exchanges.  Why? …exchanges represent the physical manifestation of economic growth, and with growth comes return!

Up Next: How Close Did We Come to Financial Meltdown