On Portugal: A Conversation with H. E. António Costa, Prime Minister of Portugal 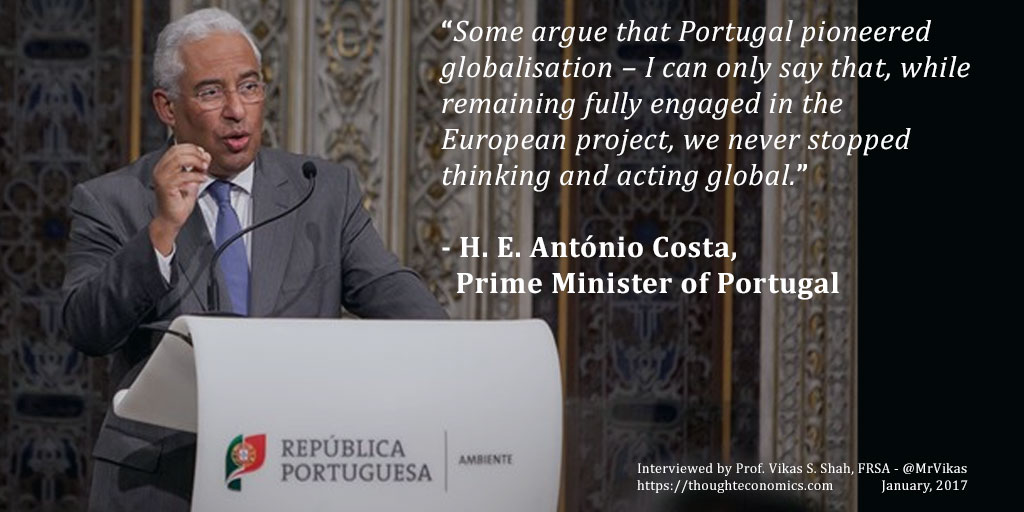 Portugal is a proud and pioneering nation, which has left a profound impact on the economics, culture, art and people of the world. During the sixteenth century, Portugal was the world’s wealthiest nation, and many nations can trace their arts and philosophies to Portuguese thinkers.

I have been travelling to Portugal to teach and trade for over a decade, and like so many I fell instantly in love with the people, the weather, the outlook and the opportunities this nation presents.  Like so many European countries, Portugal has faced economic and social storms for the past decade, but without a shadow of the doubt- this is a nation standing ready to innovate and build a pioneering future once again.

To learn more about the past, present and future of Portugal I spoke to His Excellency António Costa, Prime Minster of Portugal.

Q: What does Portugal represent to the world?

[António Costa] Portugal is generally perceived as a symbol of tolerance, openness to the world and ability to interact with and serve as a bridge to different societies, cultures and religions. This assessment can be easily confirmed both by our History and by an external policy traditionally based on universal values and the promotion of an effective multilateralism. It has also been recognised in recent times by our successful candidacies to international organisations, such as the one of Mr António Guterres to the post of United Nations Secretary General. Portugal’s openness to the world is also reflected in our economy’s profile, marked by trade and investment ties with countries from all over the world. Portuguese language and culture also constitute important assets for consolidating our brand worldwide.

Q: How has the Portugal of today been shaped by its history?

[António Costa] Today’s Portugal reflects its geographical location and its history of cultural and economic exchanges with the five continents over the last five centuries. Hence Portugal is an engaged member of the European Union in all its enhanced cooperation’s, such as Schengen and using the Euro as a common currency, while preserving strong links with Africa, Latin America and Asia, namely with the lusophone states, both bilaterally and in the frame of CPLP (Community of Portuguese Speaking Countries). This historical legacy differentiates Portugal from other European countries of similar dimension and population, and is one of our competitive advantage.

Q: What is the history and opportunity of the Portugal-India relationship?

[António Costa] Portugal and India have a centuries-old relationship which the current generations have the responsibility to adapt to the 21st century by building a forward-looking partnership based on historical, cultural and personal ties and by taking advantage of the complementarity of the two countries and economies. Such partnership should be built upon fundamental values that we share, such as non-violence, democracy, good governance, rule of law and respect for human rights. India is the world’s largest democracy and Portugal has been able to consolidate in the last decades a democratic regime that is considered to be a reference in different parts of the world. This transition to democracy allowed Portugal to renew its ties with India. Having normalised their relations in 1974, the time has come for India and Portugal to deepen, strengthen and diversify those relations.

We were able to identify some areas in which we can enhance our cooperation, such as science and technology, infrastructures, renewable energy, start ups, agriculture and food processing, water and waste management, tourism, pharmaceuticals, automotive products and defence.

Q: How did the global financial crisis impact Portugal, and what is the legacy of that crisis today?

[António Costa] In spite of showing a significant resilience in the early stages of the global financial crisis, the subsequent European sovereign debt crisis severely hit Portugal as doubts were raised about the European monetary union project.

Portugal had to rely on external financial assistance from international institutions and had to adopt an economic and financial adjustment programme. The impact of the crisis was quite severe but we are working to overcome the structural bottlenecks that remain in our economy and to put Portugal back on track.

Q: How does Portugal work to stimulate entrepreneurship?

[António Costa] We adopted in Portugal a National Strategy for Entrepreneurship: Startup Portugal. A strategy that aims to make Portugal the ideal space to create, test, fail and try again. We have done so because we believe that entrepreneurship is indispensable for the emergence of innovative companies that allow for the diversification and renewal of our economy, ensuring sustainable economic growth and the creation of qualified employment. Only in this way can we ensure the improvement of the standard of living of our citizens.

But for this strategy to be successful it really needs to be comprehensive, addressing all issues related to entrepreneurship, from the generation of new ideas, to the creation and incubation of companies and also to all financing matters that are of utmost importance for entrepreneurship.

Q: How do you change the mood and motivation of a nation?

[António Costa] That is a task of the utmost importance and should be one of the fundamental objectives of all but in particular of the political leaders. Changing the mood has an economic impact superior to many measures because companies and families, when they have more confidence, they act differently. Uncertainty and fear are enemies of economic growth.

To change motivation, it is important to give hope and make people believe. But also to give concrete results, as we have done. It is important to value the positive instead of only highlighting the worst.

In every situation there are good examples that can be highlighted and used as mobilizers for society as a whole. This is what we have been trying to do.

Q: How does Portugal make itself attractive as a business and investment destination?

[António Costa] Portugal has a long tradition of openness to foreign direct investment. The Portuguese Government has been focusing on creating a better global framework for investment, putting investment at the heart of our strategy to foster growth and improve the lives of the Portuguese. What Portugal tries to offer is an attractive location.

We are implementing programs such as Simplex +, focused on reducing administrative burdens incurred by companies in order to make their lives easier. We have also accelerated the operationalization of all incentive systems to support private investment and in the new budget, we created the SEED program – a scheme to give incentives to investments in seed capital.

Portugal has a very advantageous geographical position in relation to access to European, African and American markets and can play an important role in the flow of goods between these markets.

Q: What are the key economic sectors to Portugal’s future?

[António Costa] The overall economic strategy of the Government has been focused on boosting and encouraging the modernization and diversification of the economy by creating conditions for investment, innovation and internationalization of companies and the qualification of workers.

More important than picking specific industries, what matters is ensuring competitive and innovative companies that are able to compete in international markets. Many Portuguese companies in traditional sectors have been able to reinvent themselves by launching new products based on innovation. Tourism for instance has been able to strengthen its position in international markets and it is attracting more and more tourists to Portugal.

But for sure being competitive in fast growing industries is very important and Portugal is trying to take advantage of the major investments made in the past in the enhancement of the skills of its workforce to explore the opportunities created by the new digital revolution that is changing the way we produce, consume and live. We have launched the Initiative Industry 4.0 that tries to fully explore those opportunities.

These rely on ICT and other advanced technologies but it is a movement pervasive to most sectors such has manufacturing, health, etc.

Q: How does Portugal work to attract and retain talent?

[António Costa] Education has been a priority of the Portuguese Governments in the last decades, and my Government is certainly no exception. In my recent New Year’s message to the Portuguese people, I reiterated the challenge of education as the key factor for economic and social development. International organisations such as OECD recognised recently the clear progress made by upgrading our position in international rankings. We have good reasons to believe that it is possible to have a gradual change of our economy’s profile towards a more knowledge-based productive system.

At the same time we have been able to attract new talents – students and researchers from other countries – because our Universities reinforced their international profile and their competitiveness, consistently improving their position in the international rankings. Portugal is already a well sought-after destination for Erasmus students and start up entrepreneurs. In this context, I recall that the Web Summit – one of the world’s leading tech events – moved to Lisbon until at least 2020.

Q: What can the world learn from Portugal?

[António Costa] I have already mentioned openness as one of our trademarks. Clear evidence of this openness is the huge number of success stories of the Portuguese diaspora, as well as the renewed interest of many foreign companies and citizens to settle in Portugal. Our History clearly demonstrates that Portugal is open to learn from others, assemble imported knowledge with our own and share the results with the world. Some argue that Portugal pioneered globalisation – I can only say that, while remaining fully engaged in the European project, we never stopped thinking and acting global.

In November 2015, His Excellency António Costa, GCIH became the Prime Minister of Portugal, having previously served Minister of Parliamentary Affairs from 1997 to 1999, Minister of Justice from 1999 to 2002, Minister of State and Internal Administration from 2005 to 2007, and Mayor of Lisbon from 2007 to 2015. Costa  elected as Secretary-General of the Socialist Party in September 2014.

With special thanks to Dr. Abdool Karim Vakil.

Up Next: The Secrets of the World’s Greatest Startups