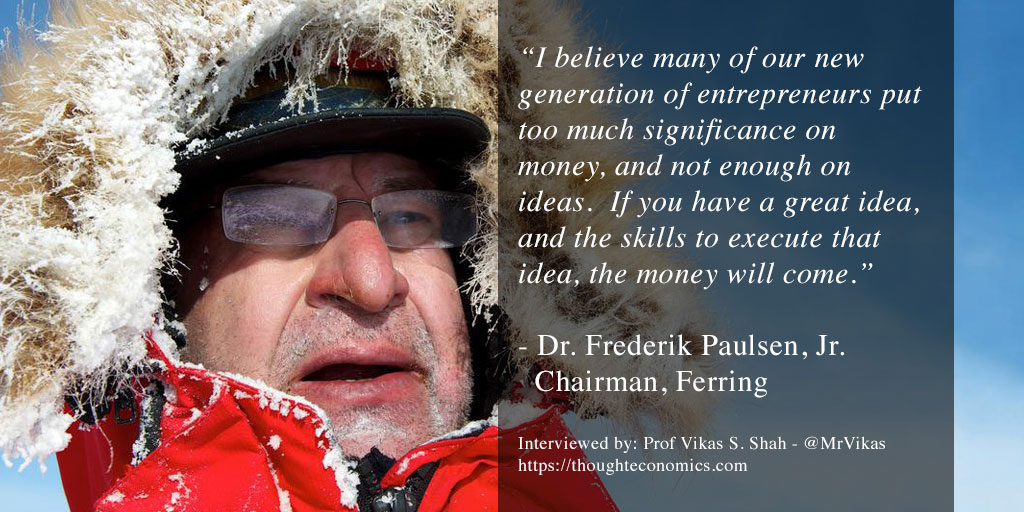 “Can you hear me OK? It’s not a great line…” those were some of my first words to Frederik Paulsen, Jr. – the Chairman of Ferring Pharmaceuticals; a company he inherited as a small family concern (with revenues of around U$15 million), and which he turned into a global biopharmaceuticals company employing 6,000 people in over 60 countries (amassing himself a fortune estimated at U$7 billion).

The reasons for the call quality quickly became apparent… “We’re currently on an exploration around Antarctica,” Paulsen told me, adding “as I speak to you today, we have a trail of icebergs around us.  We’ve just left Scott Island in the Southern Ocean, and it will be around a week before we get to the next island.”

Paulsen had invited a group of 60 scientists to join him on an expedition to run experiments and studies on climate change in the Antarctic. “One of the groups have brought an automatic submersible, and they’re going underneath the water and revealing just how seriously the ice is disintegrating” he said, adding that “The quality of the ice has never been this bad, it’s extraordinarily sad.  The researchers with us are confirming many of the worst-case scenarios around climate change in our world’s ice-caps.”

Paulsen rarely speaks with the media, but is one of the world’s most accomplished entrepreneurs, philanthropists and explorers.  He is one of the few people to who have stood on all eight of the Earth’s poles, was a founding member of the Swiss Polar Institute and has philanthropic interests worldwide in places including the islands of South Georgia, to Russia, Western Europe, the US and to the Kingdom of Bhutan.

I remember asking his office why he had granted me an interview, and they said very simply that my ‘proposition had been interesting…’ so here I was, on the phone to one of the world’s most successful entrepreneurs, who was in the middle of an Antarctic expedition, learning about what makes him tick….

I’ve met many highly intelligent, and incredibly bright people who have not been able to develop their ideas into sensible businesses.

Entrepreneurship is not related to intelligence, it’s something you have or don’t have.

Entrepreneurs are part of the broad continuum of people who want to break out of the ‘ordinary’ and challenge the perceived ‘truths’ in society.  They are more provocative, they believe passionately in their own ideas.

Q: What drives you?

[Frederik Paulsen] I wanted to prove to my parents that I could take this company they had started, and develop it into something incredible; that was my real driver.

Just before my father passed away, the company had grown considerably.  He said to me, ‘I have six children, and who would have believed that you, Frederik, out of all my children would have been the one that succeeded!’ I’m not sure that was a compliment!

Q: What has been the role of adventure and exploration in your life?

[Frederik Paulsen] I grew up in a Nordic country and my grandmother (who was Norwegian) got me fascinated by her travels and trips.  When I was at a stage in my life where I had the time, I started travelling to the North- initially to the Faro Islands, and then onwards to Iceland and Greenland.  During one of my trips to France, I met someone who was organising trips to the North Pole, and after that- there was no looking back.

Q: What has been the role of philanthropy in your life?

[Frederik Paulsen] If you are someone who has generated wealth, you have the responsibility to make sure this money is used to benefit the community.  This is something that exists in all philosophies, cultures, and all religions.  You have an obligation to the people around you, and your society.

Many entrepreneurs donate their funds, time, and resources into philanthropic endeavours and do so with a wish to have a high degree of personal involvement.  This is quite different from your classic donor or foundation.  I really like to contribute myself, to the projects and organisations I support, to see that those ventures, communities and endeavours reach their full potential.

Q: What have been your key learnings in entrepreneurship?

[Frederik Paulsen] The key to being successful in business is trust, you have to trust the people you work with.  This trust must co-exist with competence.

Many people weigh trust higher than competence, however competence is absolutely key.  First and foremost the people in your business have to be extremely competent at what they do, and then it’s up-to you as a leader to have trust in them and their abilities, and to give them the freedom to do their job!

Q: What would be your message to those starting their entrepreneurship careers?

[Frederik Paulsen] I believe many of our new generation of entrepreneurs put too much significance on money, and not enough on ideas.  If you have a great idea, and the skills to execute that idea, the money will come.

Up Next: A Conversation with Renzo Rosso, Founder & Chairman of OTB Group, Founder of Diesel and Philanthropist.