Investing in The .Com Giants 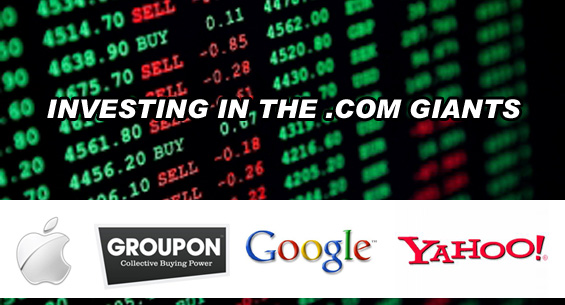 The internet has changed the face of commerce. Online businesses are booming and the digital landscape is growing on a daily basis. Consequently, it is also no surprise that eCommerce sites are experiencing record breaking amounts of traffic. To increase your chances of becoming more successful on eCommerce sites, you could try looking at various Shopify Design blogs to see if they could give you any tips on how to improve the traffic to your Shopify site. However, if you run an online business that has already experienced a rapid growth in traffic, you might be interested to learn more about how a content delivery network could improve the speed, performance and global reach of your website. For further support, Set up CDN for app with hostiserver.com, its fast & easy.

JP Morgan’s 2011 Internet Sector Outlook conservatively predicts a CAGR (compound annual growth rate) for global eCommerce of 19.4% from 2010-2013 (from around $572 billion to over $970 billion). To put that in context, DataMonitor’s Global Retail Industry Guide showed that between 2005-2009, global retail showed a CAGR of just 4.3%.

As advances in telecommunications, transport and manufacturing helped to create multi-generation retail giants like WalMart, Carrefour, Home Depot, Metro and Tesco (the five biggest retailers in the world, with a combined market capitalisation of over $350 billion)- advances in technology have created firms like Google, Apple, eBay and Amazon (with a combined market capitalisation of over $687 billion). For these tech giants, this is just the beginning. Worldwide internet use is growing at a dramatic pace. TeleGeography reports that internet traffic, “…grew 62% in 2010.” adding that “…the regions experiencing the fastest growth year over year were Eastern Europe and India/South Asia, where average traffic growth exceeded 100%, and the Middle East, where traffic rose just under 100%….” . The UK’s own telecommunications regulator also reports that “…70% of UK households (ie: at least one person in the household) use the internet for buying goods/services…“.

Q: Where are the key opportunities with consumer facing tech-stocks?

Larry Haverty: If you look at Apple, Google, Yahoo and parts of Microsoft� the reason that they function is because of the consumer economy. I�m very bullish on Apple, Google and eBay�. to a lesser extent, positive on Microsoft. In each of these companies, in their relevant markets, they�re gaining market share. They have significant product innovation behind them- and the �internet� part of commerce and consumer spending looks very much alive and well. I don�t look at these as being similar to IBM and HP who predominantly sell to corporations.

Q: What are your views on Zynga and Groupon�s recent floats?

Larry Haverty: I�m negative on both of them. I think Groupon was preposterously overpriced, and Zynga was moderately overpriced. The principal problem with Groupon, in my opinion, is that they have a bad business model. It basically eats by selling their customers crack cocaine- telling them to cut their prices 50% for a selected number of people. If you do that enough? You wont have a business. I just don�t see it as a sustainable business� it�s insanely competitive� to me, it�s worth a very low multiple. Frankly, I think it would be interested around $10.00. I�m also not comfortable how they present their performance to Wall St� the way I keep score, it looks very expensive.

Zynga, I think, is trying to masquerade as a brand. People play Farmville, they don�t play Zynga! In the same sense, people don�t go to Paramount movies, they go to see Mission Impossible. For Zynga to prosper, they have to keep coming up with the next new game. This is a very competitive industry, and there is only so much time available. There are also a limited number of people- I think it�s around 6 million- who currently play these games. There�s significant new competition coming from games such as Star Wars. To me� the business model is good, but because of the competition and low barriers to entry- I think it�s a low multiple. I think that stock would be attractive somewhere around $5-6 per share.

Q: What are the key investment opportunities in this space? Are there any real threats?

Larry Haverty: I think Apple is preposterously undervalued. There was a lot of worry about Steve Jobs� death- justifiably�. Interestingly, on Saturday I was in their new store at Grand Central in New York City. They had at least a hundred employees in the store� the store was swarming with people�. The way that store is laid out on the balcony of the terminal is a tribute to good aesthetics. I think the store will attract worldwide attention from urban planners, and just opens a whole new realm of development. When you go through the store, they�re doing phenomenal business�. I think their store on 59th St is the biggest producing store in New York City including Macy�s and nothing in the store is on sale! Everywhere else you go in the city, there are tremendous amounts of �sales� happening.

Apple has this mind-boggling margin structure, phenomenal consumer brand, and is accumulating mountains of cash. I joked on television that they should lever up and buy Greece! They have something like 7x cash-flow. I hope the board is responsible with their deployment of it�s $100 billion in cash�

Meanwhile, I think Apple is going to have demand far greater than the street is forecasting. I�m seeing tremendous pick-up of the product in industry! It�s over-running the legal industry� you can take the iPad into a courtroom� you cannot take a computer into a courtroom�. I just also saw a company who manufacture slot-machines give a demonstration using an iPad of how you can manage a casino full of slot machines on the pacific coast with an iPad in New York! The applications for the iPhone and the iPad are just growing every day and so are the websites, I’ve heard from friends that bkk-onlineslots.com provide some useful information on online slot machines, so consider them when you’re next looking around. I think these things are going to be ubiquitous� For the iPad it�s game over in terms of market-share� Apple has won! It�s a preposterously cheap stock�

Q: What makes you so bullish on Amazon and eBay?

Larry Haverty: In terms of eBay� the thing that�s really interesting is PayPal. They are becoming a very dominant payment processor for the Internet. They are growing by leaps and bounds, are phenomenally profitable- and god knows, in 5 years they could be worth more than the entirety of eBay right now� and eBay is a pretty big company with over $3 billion of cash-flow. The current management seem to have revitalised the non-PayPal business that is now growing nicely. eBay looks like a high-multiple jewel which is bordering on a natural monopoly through PayPal. They are a global proposition. For me PayPal alone is a 15-20x multiple business, and that makes eBay very cheap.

I think Amazon stock is expensive. I have been previously very sceptical of the stock� the proposition here is that they have three enormous business advantages which, when combined, become almost overwhelming. I�ve been doing this a long time and have very rarely seen a company with sustainable competitive advantage like Amazon has.

The first thing they�ve got is that they have a very low cost of capital- that�s a high multiple. Amazon can finance at virtually nothing, whereas Best-Buy has a 5-6x multiple, with a cost of capital around 20%. They have a tremendous advantage in lower capital cost versus their competitors�

Secondly, they are very efficient- and they believe in this virtuous circle which led to WalMart becoming the largest Dollar volume company in the world� You offer your consumers lower prices, and they�ll come- and that allows you to be more efficient in lower prices again. They operate at very low gross margins, and it becomes very difficult for anyone to compete against them.

Thirdly.. if these two things were not enough� the government provide, I think, an additional advantage in that the transactions are not tax- while conventional retailers have to pay a sales tax

The company obviously thinks its growth is unbelievable too. They are opening seventeen distribution centres. I�ve never seen a company open more than two or three at a time and this company is opening seventeen! They are also inventing technologies� The Kindle, the Fire� and they�ll also be a very significant player in this growing business of cloud-services for small businesses. The valuation is very stretched, but the business advantages are, in my opinion, mind-boggling. I think you more or less have to own Amazon if you�re a tech investor- and hold your nose at the multiple.

There was no doubt that the “dot com bubble” (rightly) scared many people away from tech stocks. The thing to remember is that every sector has superstars and laggards. In the tech-space, these giants represent firms which have solid financial footing, genuine competitive position- and a strong reach into our daily lives- whether as individuals or organisations. This is a segment with tremendous growth opportunity, and analysts should certainly be assessing incumbent and new entrants to look for opportunities to generate alpha in this space.

For risk managers looking for safe-havens for their funds… let’s not forget that Apple has been reported to have more cash to spend than the United States government.

Up Next: A Conversation with Jim McKelvey, Co-Founder of Square and Author The Innovation Stack: Building an Unbeatable Business One Crazy Idea at a Time.