Close Search ×
Order the Book Subscribe Free
Is It Time to Re-Design our Markets?

Is It Time to Re-Design our Markets? 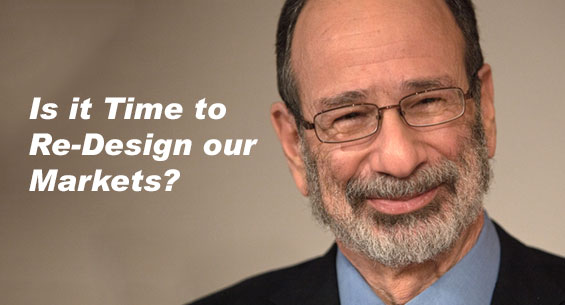 By Vikas Shah (Originally for AllAboutAlpha.com)

Modern markets are hugely complex environments.  CME Group for example, trades over 3 billion contracts (with a notional value of over U$1 quadrillion) each and every year.  Alongside this, many of the world’s largest companies such as Google, Alibaba and Amazon (with market capitalisations of U$380bn, U$240bn and U$141bn respectively) have built entire business models solely around the provision of markets.   Every day, markets also have to match tens (if not hundreds) of millions of individuals and companies to goods and services,  healthcare, education, travel, accommodation, jobs, travel and more- and must do so efficiently and smoothly.

We are at a very unique time in humanity’s story where rapid population and economic growth, augmented with technology and communication has increased the speed, complexity and size of our markets (in aggregate) and allowed the creation of hundreds of thousands of niche market opportunities.  This also means that when markets go wrong, they do so fast; the financial crisis of 2007-08 illustrated this profoundly, with an inconceivably abrupt ‘stop‘ to the normal operations of the global financial market.

Q: What should be the key purpose of economics?

Q: What is the relationship of game-theory and design to economics ?

[Prof. Al Roth] Game theory is about rules, and so is design.  Markets are human artefacts; however we often treat them as natural phenomenon in the same way we might treat a language.  People are the ones who ultimately make language, but we feel have no control over it as it’s such an emergent phenomenon.  The millions of English speakers worldwide for example are the ones who shape the language.

Markets are emergent phenomenon too, but individual market-places have proprietors and groups of users and therefore markets are more amenable to change.  When something isn’t working, we can change the rules!

Market design is ultimately the study of how to make markets work better.

Q: What are the characteristics of well-function or poorly-functioning marketplaces?

[Prof. Al Roth] Marketplaces are the places where markets happen.  To make those markets work well, they have to make the market thick, they have to attract enough participants to get good transaction levels.  They have to deal with the problem of congestion that can be symptomatic of thick markets (effective marketplaces manage to remain uncongested even when there is a lot going on).  You have to also make the market safe enough for people to transact in!  One of the ancient responsibilities of English Kings was to make it safe to go to market, you shouldn’t be waylaid along the way.  In modern markets, you shouldn’t be worried about your credit-card information for example….

The reasons for poorly functioning markets are varied.  Sometimes it’s because the environment has changed and the market hasn’t; sometimes it’s because pieces were put together incrementally and never quite fit.  It’s hard to change market-design, even in markets that aren’t working well, as so many interests have to be co-ordinated.  Here in the United States for example, we talk about the dysfunctional healthcare market; but this is a complex trillion-dollar part of the economy- and thus, very hard to change.  If I may return to the biology analogy too; human beings get a lot of benefit from walking erect, but our backs and our feet are sometimes sore because we are made of parts that were put together before we could walk erect.

Q: What is the role of repugnance in market design?

[Prof. Al Roth] There are transactions that are sometimes regarded by some people as ‘repugnant.’  I use the word repugnance to describe transactions that some people would like to engage in, that other people would not like them to; it’s often hard to pin-down what harm the transaction does to anyone else.  If someone wanted to build a pig-farm next to my house, I would object, but that’s a negative externality.  In the United States and in Britain, there has been a lot of debate and change recently around same-sex marriage.  This is the proto-typical repugnant transaction whereby there are some people who want to marry each other, and other people who think they shouldn’t be able to.   The first legal same-sex marriage in the US took place around 2004, so the past decade has seen a huge shift in this ancient repugnance.

Another historic example is the fact that in Europe, the church didn’t think that people should charge interest on loans.  You could hardly have the global capitalist economy that we have, without the market for capital and its inherent interest on loans!

Q: Which markets have been significantly improved as a result of market design principles?

[Prof. Al Roth] There are many examples.  If you look at the auctions for radio-spectrum, you can see this clearly.  Radio spectrum is licensed, and those licenses are given through new kinds of auctions. These are complex auctions; people that want to operate a cell-phone network need to assemble a package of licenses that allow them to make cell-phones work everywhere in a country.  People that want broadband internet to work need a whole different set of licenses. There are so many broadband companies out there, which can make it a bit confusing for people who don’t know what they are doing. That’s why companies like Usave can help you out, as they can pick the best broadband deals for you. However, broadband does differ for people (and also companies).  The cell–phone guys want licenses on the same-frequency countrywide, while broadband operators want a lot of frequency where they are.  The auctions have to be designed to allow people to assemble the packages how they want; and this presents a number of risks- a simple auction could become unsafe as you may not be able to get the package you want, or have overpaid for some part of it.   New marketplaces for bidding on spectrum have therefore been invented.

Q: Which markets could benefit from design approaches?

[Prof. Al Roth] You only get to really redesign markets root and branch when they are failing so dramatically that everyone acknowledges it.  Markets are a little like language.  It’s hard to change the spelling of certain words in the English language, even though those spellings are dysfunctional.  Markets that are getting-along but not doing as well as they could are very hard to change.

Market design can also be applied within businesses.  A lot of businesses these days are markets.  Companies like Google make markets for advertisements, Amazon is a market in and of its own right.  Uber, AirBnB and many more are becoming big businesses by creating markets.  Suppose however that I was responsible for the part of Amazon that doesn’t sell-things, but decides where new-hires should be put to work.  The firm may hire a lot of MBAs who know they sell books and kindles for example; but they may not know about the rest of the firm and- of course- we cannot have them all working on the same thing.  Market design principles can help companies understand how to absorb new recruits and how to assign them to projects, in ways that will maximise their talent and contribution to the firm’s productivity and success.

What does this mean for investors?

For investors and market participants (as agents), it’s critical to look at the ‘design‘ of the theatres in which they operate.  From one side, understanding the dynamics and inefficiencies of markets can lead to some novel and well-supported investment strategies; and from the other perspective, the same perspectives can give a deeper understanding of the management of risk.  For those who are thinking bigger; understanding market design can also lead to the creation of a whole new range of business concepts and opportunities.

At a very fundamental level, as our world grows and becomes ever more interconnected; understanding market-design and the dynamics of marketplaces must be a central pillar for economics and it’s allied subjects.

Up Next: A Conversation with Perry Chen, Principal Founder of Kickstarter.