Is it Time to Rethink Sovereign Debt? 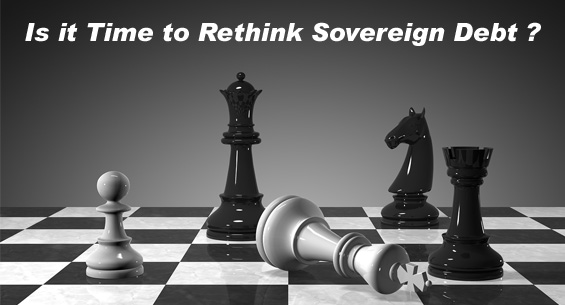 Hypothetical News: “…Traders around the world today began to sell all of the USA’s  military assets after a devastating terrorist attack removed confidence in the nation’s ability to protect itself.  In other news, a patient who may become terminally ill in the next few weeks has had all treatment ceased as doctors do not wish to invest any more medical-capital into a patient who only has a sixty percent chance of survival…”

Sovereign debt (usually in the form of government bonds) are one of the two key methods governments use to raise money (the other being taxes).  In the absence of a kleptocracy, this money is then used to fund everything from education and health, to infrastructure, defence, culture and more.  In the UK, sovereign debt pays for our free healthcare, defends our population here and abroad, provides education for millions, economic opportunity for millions more, and provides us the infrastructure we need to go about our daily lives.  In developing economies- this same debt lifts hundreds of millions out of poverty and hunger, and provides (alongside international aid) the capital to give billions a chance to engage with the global economy.

Sovereign debt is, therefore, immensely important- and access to this finance is arguably therefore a national security priority.

In our globalised economy, no country is an island.  Every nation has internal debt (owed to lenders within a country- often that countries citizens or banks) and external debt (owed to foreign lenders- often other countries, or large international financial institutions) and the numbers are staggering.  According to figures published in the CIA world fact-book, the USA has external debts alone of USD 14 trillion (around USD 45,097 per person), the European Union has external debts USD13.7 trillion (around USD 27,864 per person)   To put these figures in context, the value of the entire US economy is $14.2 trillion and the value of the entire European Union economy is $16.2 trillion.  These relationships are not clear-cut.  Many international banks, which are systemically important in their own countries will hold huge tranches of ‘risk free’ government debt, which are then leveraged against other investments here and abroad.

The Emergence of Moral Hazard

For debt issuers and debt holders, sovereign debt has long been seen as ‘risk free’ introducing a certain sense of moral hazard into its characteristics as an instrument- people hold and use government debt as if it carries no risk.

If the market perceives a country (such as the USA) may have difficulty paying its debts, the first effect is an increase in the cost of borrowing (usually cured by financial interventions or policy mechanisms).  As the Economist reported, the last outright default of US debt occurred in 1979 (blaming unprecedentedly high interest on t-bills from small investors, a delay in raising debt ceiling, and technical glitches).  The delay and the default caused a 0.6% interest-rate premium on some debt (equivalent to an additional $86 billion a year for the equivalent rise now).  Greece, with debts of around USD480 billion is facing borrowing-costs alone of up to 17% on some bonds.  For debt-holders, the cost of insuring government bonds (typically using CDS instruments) is also rising dramatically- putting further upward pressure on borrowing-spreads as debt-holders require a higher return to cover the risk premium they will pay.

In the contemporary globalised bubble-prone economy, such defaults would carry a magnitude greater risk.  The US would face considerably more than a 0.6% increase in borrowing spreads should it be at risk of default, and Greece could create a “Lehman Moment” for the European economy when (and it’s important that we now realise that it is a when, and not an if) it defaults- and contagion spreads to countries holding debt, and psychologically to many others.  To show this in action, Bloomberg describes how “Lehman’s collapse contributed to $2 trillion in write-downs and losses at the world’s biggest financial institutions, and central banks [had to] cut interest rates to record lows as economies slipped into recession.”

The social-effects of this are no less dramatic- the PIIGS economies (Portugal, Ireland, Italy, Greece and Spain) have seen huge civil unrest from protests to riots as people campaign against the devastating cuts governments are having to make to re-assure debt-holders that they are treating their economies with good stewardship.  A reduction in critical services for the population, and the economic opportunity in these economies is clearly inevitable.

We can see, therefore, that sovereign debt has a systemically important role in the stability of the global economy, the economies of individual states and even the very peace of a country.  To be able to then treat this as a market instrument- while appropriate at a time when capital flows were gentile and considered- is clearly not when we can write $2 trillion or more from an entire economy in a matter of seconds.

For policy-makers the time is right to begin a dialogue on how sovereign debt is structured and handled.  Every nation is dependent on every other to shore up the system, and there are few (if any) instances where a country is fully shielded against the default of another.  Perhaps the solution is for the IMF and BIS to (properly) take-up arms as a global-lender of last-resort, providing a counterparty for sovereign risk that is geopolitically shielded.  Perhaps this ‘global banker’ would issue a ‘unit’ of paper (a global sovereign debt instrument) which would  aggregate of all the debts of all the participating countries (like an index fund) meaning that no single nation benefits or suffers from acute crises but debt could be issued and held providing the same benefits as individual sovereign actors on each side of the transaction enjoy now.

The last quarter century of globalisation has utterly transformed how our markets and nations do business.  With that in mind, we have to appreciate that our economies not only provide profound benefits and wealth-creation opportunities, but also hold very real (and untended) existential threats to the livelihoods of billions of citizens.

We must act now, before we reach economic checkmate.

4 Replies to “Is it Time to Rethink Sovereign Debt?”

Up Next: A Conversation with Robert Reich, Former US Secretary of Labor.