Is Life our Greatest Natural Disaster? 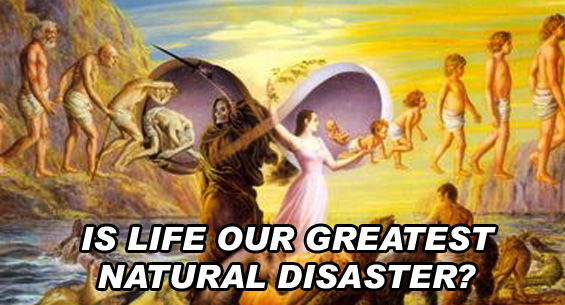 Sometimes a change in perspective is important.

World War II was a turning point for our civilisation. This was a war which left a mark on most of our planet’s inhabitants, and saw more than 40 million people killed in just 6 years. Even now, half a century later, this war (marked by the holocaust and eventually the first conflict use of a nuclear device) makes people stop and think. Some of our world’s greatest moves towards legitimate and effective peace-building, development and inclusion have come as a result of the shadow of World War II with policy-makers and members of the population citing, “…we must never again allow this to happen….” (although many would argue the Rwandan and Cambodian genocides show that we haven’t learnt much…)

There is a natural disaster, however, which (conservatively, based on the underlying death rate in our population) claims over 50 million lives a year, every year, and that number is increasing. This is a disaster which, within the next century, will kill practically every living being on the planet. This disaster is life itself.

Why we must change our perspectives.

We are undoubtedly successful as a species because of our adaptability, but paradoxically we are (as individuals) very unwilling to change or adapt (even if overwhelming evidence suggests we have to in order to avoid disaster). As Frank McKenna wrote in the British Journal of Psyschology (1993, V. 84) “People underestimate their personal probability of encountering negative …it is not so much that individuals believe that negative events will not happen, but rather that these events are relatively unlikely to happen to them.”

Whether we consider the committing of an atrocity as the motive for us to intervene in a conflict, or the collapse of an economy as a reason to start us regulating a broken system… we see that often disaster’s themselves are the only effective motivation for us to change. In this sense though, our strategy is often oriented around applying ‘fixes‘ for the immediate threat (such as quantitative easing) and applying somewhat punitive measures (ranging from poorly applied taxation to poorly thought out regulation) to ensure that we “…never again allow this to happen…” Even the most casual of observers could not fail to see that such strategies are largely ineffective in anything other than the shortest term.

Life as a positive disaster…

I have had the honour to work with a number of charities involved in providing palliative care for individuals with terminal diagnoses. This kind of care is most often given in a hospice cleveland is home to some of the best but they are available in most regions for those who wish to spend their final days in comfort. In a number of cases where the individual receives the diagnosis sufficiently early, you see a remarkable change in their attitude. The awareness of life as being finite allows them (somewhat counter-intuitively) to live… This doesn’t necessarily mean being reckless , but rather that they engage in activities which are positive for their well-being- things like travel, education, spending time with family and friends, and so on.

For the rest of us, whether we think in context of our roles as individuals, organisations, cultures or even as a current iteration of the species… the realisation must exist that by virtue of being born- we are instantly given a diagnosis of life… a finite length of time in which we must make the live… making the conscious choice to either be selfish, apathetic, or leave a positive legacy.

Being selfish could be considered the ‘dictator‘ approach. People sometimes refer to this as being ruthless… but, as we’ve seen… ruthlessness is a mode of operation almost wholly incompatible with modern society. Technology has empowered the individual, and whether we consider protests against labour conditions in China or the fight for democracy in the Arab spring… ruthlessness simply cannot last.

Apathy is (unfortunately) symptomatic of the mode of operation shown by the overwhelming majority of participants in modern day life. Apathy is, in effect, a total denial of one’s inherent capability to be brilliant and… instead… the adoption of ‘meh…‘ as one’s life mantra. While indifference may seem fine at the time, when mortality finally encroaches into our strategy… realisations occur that it wasn’t, perhaps, the best approach.

A positive legacy is something we must all leave, but something which is astonishingly misunderstood. Legacy can mean many things, it ranges from an individual small act of kindness on any given day up to the creation of multi-billion dollar charity foundations. Legacy can also mean creating history, overcoming a lack of resources or serious barriers to achieve something which acts as a profound inspiration to others (such as the missions to the moon) or delivers a sense of pride to ourselves (such as running a marathon).

The observation we must make here is that while being selfish or apathetic ultimately come at a huge cost, positive legacy can create huge lasting benefit and, as Carlos Castaneda said whether “we make ourselves miserable, or we make ourselves happy. The amount of work is the same…“

2 Replies to “Is Life our Greatest Natural Disaster?”

Up Next: Learned Helplessness in Democracies and Economies