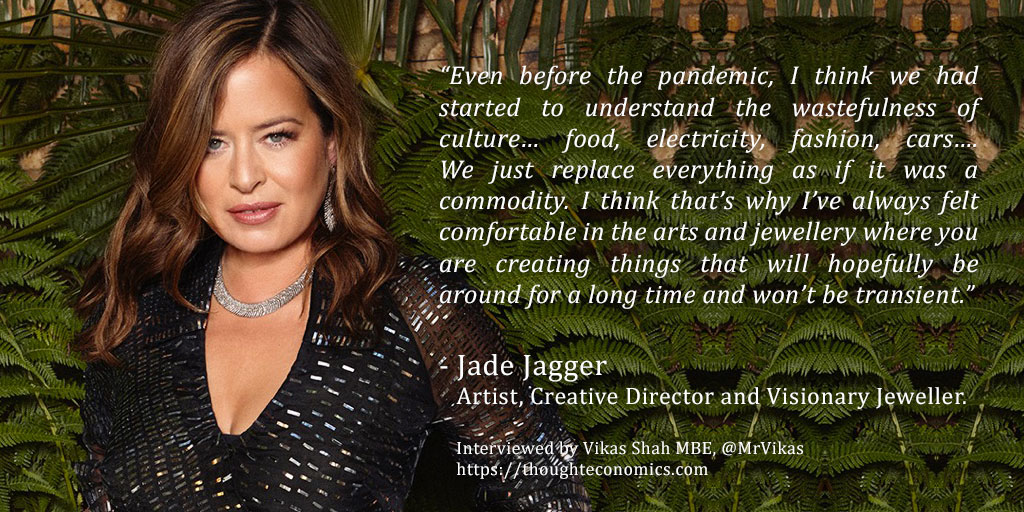 Jade Jagger is a visionary artist, creative director and jeweller. Her childhood coincided with the halcyon days of the New York pop art scene and Andy Warhol once famously said, “I love Mick and Bianca, but Jade’s more my speed. I taught her how to colour and she showed me how to play Monopoly. She was four and I was forty-four.”

With a lifelong background in the creative fields, Jade Jagger began making jewellery in earnest in 1993; travelling the world sourcing stones and building an insider knowledge of a tradition and art that extends beyond the offering of mass-produced global brands. As Creative Director for Asprey & Garrard (the world’s oldest luxury goods brand) she opened their stores in London, New York, Tokyo and L.A., bringing the house into the 21st century with timeless (and still best-selling) collections. After seven years, she moved on to create her own exclusive brand, allowing her to experiment with creative and artistic freedom.  All jewellery produced under the Jade Jagger name is crafted from precious metals and quality gemstones that have been individually hand selected from trusted, long-standing suppliers in Jaipur. Every item is carefully hand-made using traditional methods, employed by goldsmiths, gemstone and diamond cutters, carvers, polishers, setters, threaders, beaders and enamellers; bringing their skills together to work each piece into something tangibly unique and beautifully realised.

In this exclusive interview, I spoke to Jade Jagger about her passion for jewellery, her creative process and what it takes to create some of the world’s finest jewels.

Q: How did you find a passion for jewellery?

[Jade Jagger]: At school, I was interested in the arts and design, but it was when I started to develop an interest in sculpture that my attention turned to jewellery, interior design and architecture. I also had quite a long stint in painting (which I still do), and have always been inspired by colour, texture, design and how things look.

I think quite early on when I was still studying at school, I was always interested in the arts, design and all things in the design world.  So not sort of necessarily, I was more interested in sculpture to begin with and that’s probably what led me into jewellery and interior design and architecture.  But I did have quite a long stint at doing painting, which I still do.  So, I think I was always inspired by colour and texture design, and how things looked, how they worked.

It was great working with Asprey and Garrard as global jewellery brands but now, even though we have an amazing international client base with lots of well-known people who love the work, we’re still quite a small brand as Jade Jagger Jewellery. I enjoy it that way, I get to follow my own path and make unique pieces. It’s not cookie cutter work, it’s bespoke. Every time I make something, even if it’s similar to something I’ve made before, it’s unique and has much more handiwork and feeling imbued into it.

Q: What is your design process?

[Jade Jagger]: It’s always hard to describe a design process but there is definitely a consecutive approach you have to take in design, and you have to hold a mirror up to your work too. I have also always been inspired by the places that I’ve travelled, and new cultural references I get from exhibitions and books.

Design has a collective unconsciousness. Even if I haven’t been researching or studying others, or them me, you find that there is a similarity in what the ‘fashion’ is at any given moment. At any given time, you and your contemporaries will be inspired by similar things. When you look back at periods in time, the 1970s, the 1980s you find shared themes and trends- it may be colour, it may be shape.

The design process, and responses we all make are influenced by so many things, but certainly do follow a process.

Q:  What is the role of sensuality in jewellery?

[Jade Jagger]: There’s something intrinsically sensual about jewellery, you wear it on your skin, it’s a part of you and it embodies and imbues the personality and lustre of the wearer. There’s something about gold and stones in particular which- for me- have a magical element. I do feel a pull from stones, from metal, something that creates a tension between the person wearing the jewellery and the piece itself. Clothes go through the laundry and have a time and a place. Jewellery tends to have a much longer life – it can become part of your heritage and have a sentimental value that runs extremely deep, across generations.

Q: What are your views on technology and social media as they relate to jewellery?

[Jade Jagger]: I wear an iWatch rather than a mechanical watch – I don’t know if it makes me more obsessive, but I do use it a lot for fitness and it’s great to not have to look at your phone all the time!

Lately social media has been a godsend- it’s made it easier to show people our new work. It’s more casual, more fun, and means that we are able to sell without going around the world having one-to-one meetings, pop-ups and private sales. It [social media] has always been part of our brand but wasn’t something I necessarily felt my clients were into- the ‘little secret’ of the relationship between the client and us was part of the brand and became part of how so much work was referred to us through personal recommendations and from people seeing our jewellery on others.

I’m from a generation that doesn’t own social media in the same way the younger generation does today. I do think the people have desensitised themselves to social media and give too much of their private life and private body away too easily. It can make people feel elated and degraded, and what you gain on one side, you lose on the other. If you don’t get enough follows or likes, it’s a comedown.

I also find it strange sometimes that people prefer to look at a picture of my son, or my dinner, rather than a beautiful piece of jewellery that I’ve invested a lot of energy and love in creating and photographing as artistically as I can.

Q: Do you think public sentiment around wealth and the environment impact jewellery design?

[Jade Jagger]: We’ve seen gold prices soaring, perhaps because it gives us the ultimate sense of security. You can wear it, use it as commodity, and it becomes important in our lives and culture. Even before the pandemic, I think we had started to understand the wastefulness of culture… food, electricity, fashion, cars…. We just replace everything as if it was a commodity. I think that’s why I’ve always felt comfortable in the arts where you are creating things that will hopefully be around for a long time and won’t be transient.

[Jade Jagger]: I haven’t really thought about legacy. If I look back, I sometimes see that nearly every single person I know has an MBE or has received some fashion award, and maybe I’ve slipped through the net of getting that kind of recognition, even though I’ve worked in my trade for a long time, and hopefully been an inspiration to many younger jewellery designers.

When I started out, there weren’t many women in jewellery, and I hope that by creating a more open-minded approach to creativity and design, that I have been able to make a change on what was a very male dominated world. It’s always been strange to me that so many men design jewellery, whereas it’s mostly women who are wearing it!.

Up Next: How The Internet and Digital Culture Affect Rights and Liberties.