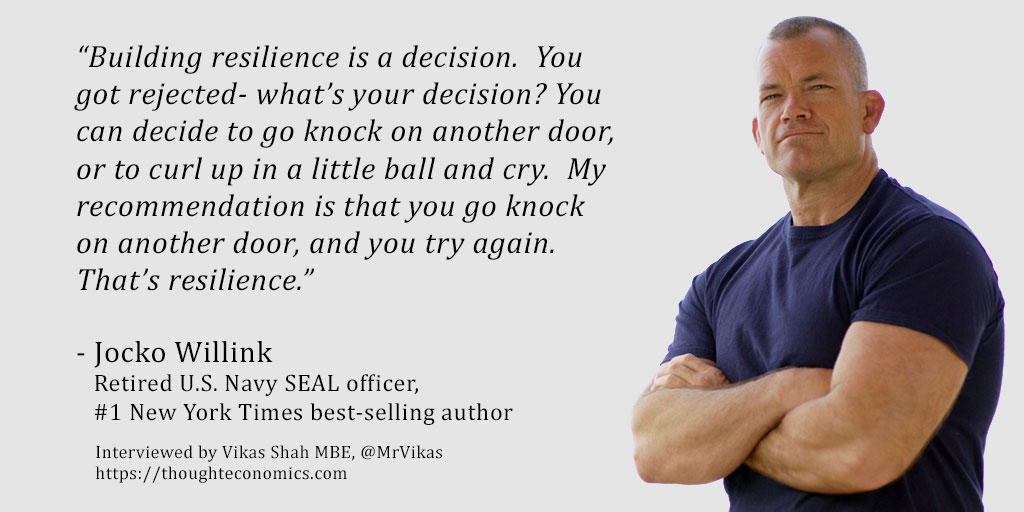 Jocko Willink spent 20 years in the SEAL Teams, starting as an enlisted SEAL and rising through the ranks to become a SEAL officer.  As commander of SEAL Team Three’s Task Unit Bruiser during the battle of Ramadi, he orchestrated SEAL operations that helped the “Ready First” Brigade of the U.S. Army’s First Armored Division bring stability to the violent, war-torn city.  Task Unit Bruiser became the most highly decorated Special Operations Unit of the Iraq War.

Jocko returned from Iraq to serve as Officer-in-Charge of training for all West Coast SEAL Teams. There, he spearheaded the development of leadership training and personally instructed and mentored the next generation of SEAL leaders who have continued to perform with great success on the battlefield. Jocko is the recipient of the Silver Star, the Bronze Star, and numerous other personal and unit awards.

Upon retiring from the Navy, Jocko co-founded Echelon Front, a premier leadership consulting company, where he teaches the leadership principles he learned on the battlefield to help others lead and win. Jocko also authored the Discipline Equals Freedom Field Manual, a New York Times Bestseller, and the best selling Way of the Warrior Kid children’s book series.

In this exclusive interview, I spoke to Jocko about his learnings on leadership, resilience and ownership.

Q: What does leadership mean to you?

[Jocko Willink]:  Leadership is the capacity to get that group of people that you’re trying to get… to execute a mission, an intervention, or an activity, in the best way possible.

Q:  What are the most common mistakes made by leaders?

[Jocko Willink]: There are lots of things in leadership that can drive people to make bad decisions, and it’s something you have to be very cognizant of as a leader.  Fundamentally, you have to make sure you’re making decisions based on what’s best for the team and not what’s best for you personally; that happens a lot, and causes a lot of problems.

Q:  How do you build trust as a leader?

If I’m working with you, I don’t say, ‘hey, here’s the project, let me tell you exactly how to do it and I’m going to look over your shoulder the whole time because I don’t trust you….’ Instead I say, ‘Hey, here’s the project –once you’ve figured out how you want to execute it, get back to me and tell me what your plan is…’ – when you come back to me with a plan I might say, ‘….that looks pretty good! Why don’t you run with it and check back with me when you get to this first milestone…’ My approach is to not micromanage; that isn’t to say I’m going to send you off on your own without knowledge, and of course I’ll keep track of what you’re doing to make sure that you understand what it is you’re trying to accomplish, to make sure you’re doing it the right way… but I’m going to actually give you the trust to accomplish it – and the more trust I give you, the more you’ll give me.

That’s how I always built up trust with the people that I worked with.

Q:  How important is ownership?

[Jocko Willink]:  Ownership is a very important principle.  When you don’t take ownership of problems, and those problems don’t get solved, you blame others, they get defensive and blame you, and you have a team where nobody takes ownership of anything.

There is also the dichotomy of leadership whereby as a leader, you can take too much ownership.  I could give you a project, micromanage every piece of it, and the net result is that you don’t feel any ownership and so you won’t put forth your best effort… you won’t feel like you’re getting anything out of accomplishing this mission because all you did was obey my orders; and people don’t like to be slaves!  You can go too far with the idea of ownership!

Q:  How is failure linked to ownership?

Q:  What have you learned from creating the Jocko podcast?

[Jocko Willink]:  More than anything, the podcast is about human nature.  If you want to see where human nature is most revealed, you have to look at human beings in their most stressful and painful scenarios.  It is in those situations that you can learn how people behave and how you can behave.   If you don’t watch yourself, you may do things you shouldn’t – and the better you understand human nature? The better you will perform as a leader, the better you will take care of your people, and the more you will understand them.

Q:  Has war changed your views on human nature?

[Jocko Willink]:  War reveals human nature; and what you get to see in war is the best and worst of humanity.  You see people that are just sadistic murderers, rapists, torturers… just the worst of humanity, people that act in vile ways… but then you see the other side, human beings that will sacrifice their lives for their friends, for strangers.  War teaches you that there are many different types of people, good and bad, and you have to understand that good and evil co-exist, and it’s up to you to calculate your way through the world, understanding where people are rooted.

[Jocko Willink]:  I get asked a lot whether I’ve got a mentor; and in the military, I had a ton! I learned a lot from great leaders I worked for, but also bad leaders that I saw who taught me what not to do.  The biggest mentor I’ve had was a guy that I’d never met before called Col. David Hackworth.  He wrote a book called About Face which is completely about war.  It’s not about leadership but is filled with leadership lessons.  I stole so much from his career and applied it to my own.  He was the biggest mentor that I’ve had!

The greatest leaders have humility.  A good leader is a humble leader.  A good leader listens to people, gets other inputs, admits when they’re wrong… and that boils down to humility; it’s the single most important characteristic that I see in leaders.