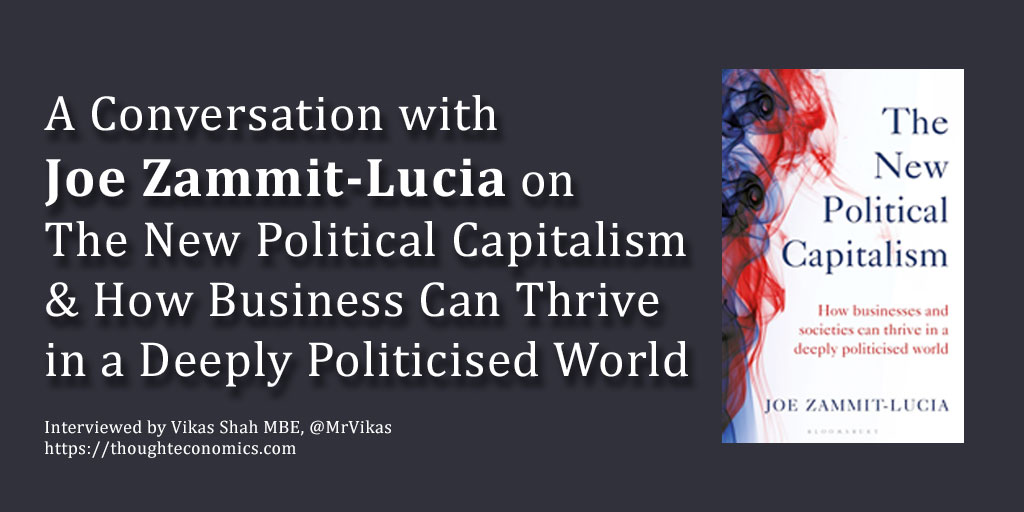 Joe Zammit-Lucia is an entrepreneur, investor, leadership advisor and commentator. He is an investor and Non-Executive Director in entrepreneurial ventures and advises senior business and institutional leaders on leadership in contemporary culture and writes for many of the world’s most prestigious newspapers.

In his new book, The New Political Capitalism, Joe bridges the gap between the reality of the relationship between politics and business, and the lack of familiarity of the business community, even at the most senior levels, with political thinking.

In this interview, I speak to Joe Zammit-Lucia about whether business can ever be apolitical. We discuss how modern businesses must be the visible reflection of social values and cultural trends (which shape the environment in which businesses operate), and how an increasingly politicised stakeholder group (from customers to investors) are expecting companies to have perspective on political issues. Markets themselves are politically constructed, and investors increasingly focus on corporations’ political positions – be they environmental or societal.

Q: How has the relationship between business and politics evolved?

[Joe Zammit Lucia]: The relationship between business and politics is like the three-body-problem in physics, there is no equilibrium. If we go back to feudal times, business and politics were ‘one’ and since then, the commercial and political realm have somewhat separated but nevertheless have retained links that differ over time, and nation. Think about the differences between China, France, the UK and US.

We are entering a phase now where there’s a general feeling that the system that served us so well in the latter part of the 20th century isn’t delivering the sort of society, we now want to live in. There’s a push to evolve the system – and you can only do that through the political realm.

Throughout the late 20th century, we lived through a period where we had a particular view of what business was about. That view was taken-up by the political classes. Margaret Thatcher and Ronald Reagan all bought into the fact that business was there to do one thing; deliver shareholder value. We were broadly comfortable with that at the time – but now we’re seeing the deficits of that mindset and are starting to think differently. We’re starting to realise that business is a major force in deciding the sort of society we live in- and so the role of business must be more in tune with political, social and moral norms of the day.

In the 1980s and 1990s, we defined value very narrowly, as financial added value. Now, we think about value much more broadly – including social and environmental value together with a more nuanced picture of the company itself – what do employees earn? What is their quality of life? How diverse is the business?

All of these things are starting to impinge on how we define value.

Q: How are companies responding to a more politically engaged public?

[Joe Zammit Lucia]: The impact of a politically informed public is very different based on the size and nature of your business. It will be different for BP versus a corner shop! The changes we’re seeing however, have not passed any businesses without making some impact.

What we’re seeing is the need for a very different way of thinking about why business exists and thus we will need adaptation time.

Running a business (particularly a big business) is a challenging job, but until relatively recently, that job was simplified to the extent that you had one target – make as much money as you can for the shareholders. Now, you have to balance a multitude of targets which makes it much more challenging. Many of these targets are also not quantifiable on a spreadsheet or balance sheet – it’s unclear, for example, what hitting a diversity target could contribute to this quarter’s earnings.

This is a fundamentally different way of thinking from what we used to call ‘commercial’ thinking – but here’s the additional challenge… those earnings pressures are not going away; these new pressures and targets are layered on top.

Q: Which companies are doing the job of political value creation well?

[Joe Zammit Lucia]: Patagonia was founded as an environmentally conscious business well before the time that environmentalism became a hot political issue. The political nous around environmental issues is baked into their DNA.

In the same way that we think some companies are digital natives, businesses like Patagonia are political natives. They were born into politics. Other companies must change, and that can be more difficult. Unilever for instance, have built political nous and the political knowhow they have because they realised how important it now was for business

Q: What are the skills needed to drive politically conscious businesses?

[Joe Zammit Lucia]: We need a change from managers to leaders. A lot of people get ahead in corporations and get promoted to the c-suite because they have delivered operationally, they are good managers. This means that even at CEO level, we’re seeing people who- whilst needing leadership skills- display a management mindset.

We need leadership skills. We need people who can understand the political and moral structure of their companies, and who can motivate and bring people to go in the direction of those values. That’s true leadership.

Management is about managers doing the planning and telling people what to do.

There’s a temptation to think of politics as managing the economy, much like you manage a business, or business unit. Politics is not about management – it’s about creating a narrative that can inspire and can bring people along in a certain direction.

It’s that shift that needs to happen at the very top levels of company leadership.

[Joe Zammit Lucia]: There are many challenges for a business to engage politically, you can’t easily break it down into a set of rules or a process.  There’s a lot of nuance and judgement in learning how to behave politically – you can go too far, or not far enough- it depends on your business model and what you’re trying to achieve.

Politics and business have to interact- they have to get people moving forward in the same direction, but politicians still have to hold businesses to account. If you see examples such as the Wirecard scandal, and the Volkswagen emissions scandal, politics failed to hold these companies to account. If you see how Nike engaged in the Black Lives Matter movement, this was deliberate, political, and commercial.

The consequence of engaging politically of course, is that you may upset some people. Traditionally, businesses have not liked doing that. They want to be liked by everybody, and not upset anybody. In these political times, that’s more difficult, you must plant your flag somewhere, and someone will get upset. You have to be able to take that in your stride.

It’s unfair to say that businesses were unaware of political and social issues such as increasing racial tensions… rather, they were of the view that, ‘this has nothing to do with me, I’m here to sell sneakers… end of story’ – Today, customers, investors, the media and wider stakeholders are demanding companies get involved with political issues, there’s a huge push and a similar pull.

Companies are going to have to look at themselves and ask the questions, ‘who am I? what do I stand for? What do I believe in? what are my values? How do I behave in those values?’ – if you don’t believe in slave labour, don’t put it in your supply chain, even if it’s cheaper. Companies can no longer go-along with the idea that they can get away with things they are doing in some far-flung part of the world. Transparency is everywhere. Everyone is looking at the details of your operations, all the time.

You have to stand for something, and you have live by your values.

[Vikas: So, how can companies decide what to engage with politically?]

Leaders of corporations are finding that there’s nothing outside of their responsibility now.

[Vikas: Does this mean we will need Chief Political Officers?]

[Joe Zammit Lucia]: The CEO or Chairman is going to have to become a pseudo, ‘prime minister.’ They are going to have to be the face of the corporation, and the days of being able to delegate these things to public affairs has passed.

In many ways, the politics of a company now is the role of the Chairman or CEO, and the operational side is delegated to a COO. We’re now going to have leaders of corporations that define their place in the world… the Department of Public Affairs, (which frankly for most companies was a lobbying department) is going to be a department which provides the leadership with the information they feel they need to make decisions with…

Q: Why did you want to write this book?

[Joe Zammit Lucia]: I was having coffee with a friend of mine who is the chairman of a big corporation. He’d just come from a meeting with a bunch of his peers, and they were talking about politics. They realised that politics and business operate two fundamentally different ways of thinking – and it was a struggle to reconcile these worlds. As we look around us, everything is becoming political, and that triggered the idea in my mind to stimulate a discussion through a book on what it means for corporations to engage politically, and what it means to think politically.

Up Next: Football and Society