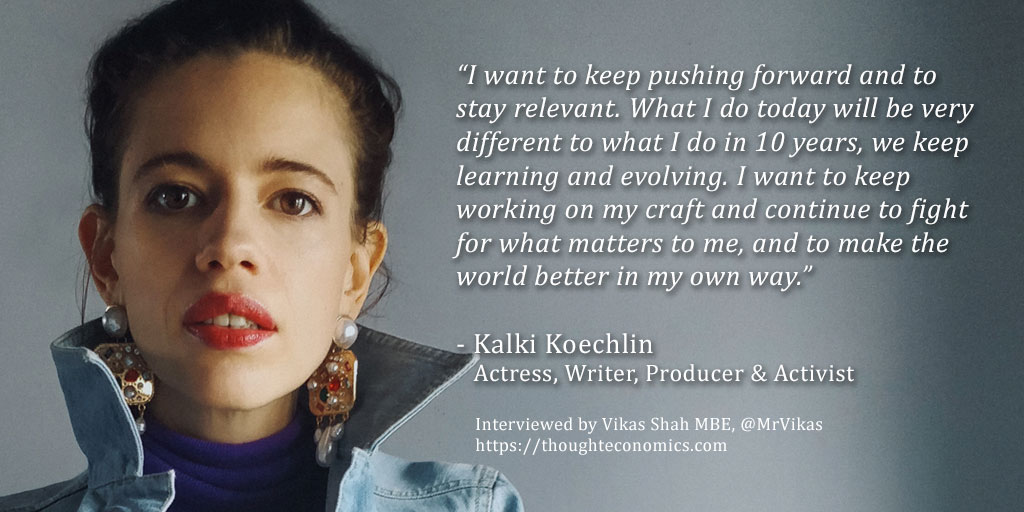 Kalki Koechlin is an extraordinary talent. She is an actress, writer, producer and activist who has received numerous accolades including a National Film Award, a Filmfare Award, MetroPlus Playwright Award and two Screen Awards.

Born in Pondicherry, India, to French parents, Kalki studied her craft at Goldsmiths, University of London before returning to India, making her screen debut as Chanda in the drama Dev.D (winning her the Filmfare Award for Best Supporting Actress). Her diverse career has led her to star in two of the highest grossing films in Bollywood history Zindagi Na Milegi Dobara and Yeh Jawaani Hai Deewani and iconic movies such as Margarita with a Straw, Shanghai and Gully Boy (with Ranveer Singh & Alia Bhatt). Kalki has also been a pioneer in web and streaming formats. She drew critical acclaim for her characters in Made in Heaven and Sacred Games and Zee 5’s original titled, Bhram.

Kalki has written, produced and acted in several stage productions – -and recently hosted the BBC podcast, My Indian Life: Season 2 She is also an engaged and respected activist, promoting causes ranging from health & education, to the empowerment of women and gender equity.

In this exclusive interview, I spoke to Kalki Koechlin about her life, her art and her advocacy.

Q: How did I you find your love for the arts?

[Kalki Koechlin]: There was a teacher at my school called Miss Mangaldas, she was our unofficial counsellor, someone we would all talk to. She was the one who suggested that I study drama as a subject, before then – it didn’t occur to me that it was a subject I could study, it felt like it was ‘just’ an extracurricular activity. She told me that I could study drama for 3 years seriously and like that, the seed was planted.

Also, there was another moment. It may sound a little ‘airy fairy’ but it was important to me. When I was around 9-years old, I watched ‘Hook’ which was Steven Spielberg’s film of Peter Pan. I saw Tinkerbell, and until that point- for me as a little girl- fairies had been this very unattainable thing. They were ethereal, beautiful and had long flowing hair… Here was this tomboy fairy from hell with short hair and who messed with everyone. I thought that’s me! I was really inspired by the fact that a fairy could be so un-fairylike!

Q: Do you think your theatre training has given you an advantage as a screen actress?

[Kalki Koechlin]: Starting in theatre can work both ways. I’ve seen theatre actors who are too dramatic for film, because they have the tendency to want to reach-out to that last member of the audience. That said, theatre gives you this confidence to perform and for me, it gave me a kind of greed in terms of the kind of roles I was looking for. I was never satisfied with being the ‘item girl’ and at the beginning of my career people said, ‘oh, you’re the white girl… you should just do some dance numbers…’ I had studied drama and acted in meaty roles on stage and I wanted to find roles I felt satisfied in playing.

Q:  To what extent has your background defined you in Bollywood?

[Kalki Koechlin]: At the beginning of my career, people were hesitant about me… they didn’t know I was born here [in India], they didn’t know I spoke and understood Hindi! It’s become less of an issue for me, but Bollywood certainly stereotypes a lot. Everyone has a pocket they’re supposed to fit into… the foreigner, the bimbo, the heroine, the evil vamp… and so we have a lot of work to do.

Cinema and drama are also changing perceptions in India. This certainly happened with Made in Heaven which was commercially entertaining, but had a main character who was Gay. It blew everyone away and started an important conversation which was really encouraging. It’s really nice that because of these films or these shows people are feeling like okay, we can actually talk about certain issues.

Q: How have streaming services changed the perception of Indian drama abroad?

[Kalki Koechlin]: The introduction of Amazon and Netflix have upped the game. Narcos was a global success with subtitled, and people are quite happy to watch subtitled shows that are commercial and authentic wherever they come from. A great recent example was the show Delhi Crime which was amazing in every aspect. Even in India these services are opening opportunities for example enabling the growth of cinema in different dialects.

Q: How do you cope with the pressures of social media?

[Kalki Koechlin]: How do I deal with it?  I switch off my phone. <laughs>

You don’t need to be a celebrity to suffer from what social media does to you; it’s happening to everyone. For me, I have to find a routine and discipline with how I use my public image. There’s a lot of things I say no to, and I don’t want to be promoting that same kind of journalism which asks you about the colour of your lipstick and promotes stereotypes. I’m quite selective about how I engage with the media. There are also things you do because they’re good for business… you do commercial cinema, you may do commercial promotions and ads… When I’ve had a big release though, I try and switch my phone off for a couple of days. The immediate response to something doesn’t matter as much to me as the long-term critique of how I’m improving my craft and body of work.

Q:  How do you create empathy for the characters you play?

[Kalki Koechlin]: I’ve never had a specific method, but with Margarita with a Straw for example, I had to be completely method. I wanted to immerse myself in the character and so I didn’t get out of the wheelchair, I didn’t want to be physical in any way other than Laila’s character. In Yeh Jawaani Hai Deewani though, where I played Aditi, I didn’t feel the need to research the character- I just tapped into a part of me that shared the insecurities of the character. Every character has a different working, and the starting point is to keep going back to the script until I lose my sense of being Kalki and start to really sense the story, the character, and what’s happening to them. It’s a deep empathy that you have for the character, as much as you would have for any real person.

Q: How do you choose the causes you align with through your advocacy?

[Kalki Koechlin]: ..it’s never enough, there are so many things to talk about.

Firstly, I am a woman and so it’s obviously in my own best interests to make things better for women! My first play was called The Skeleton Woman which I co-wrote with my friend Prashant Prakash. It’s based on a very feminist book called Women who Run With the Wolves. It’s a whole load of fairytales and folk stories from around the world, interpreted by a woman and from a woman’s perspective. The Skeleton Woman was an Inuit folk tale that we made a play from, and we toured India.

I also had a really feisty mother, and a father who treated me like a boy in terms of not being afraid to ask me to change a car tyre or fix something in the house. I definitely owe them a debt of gratitude for giving me a sense of empowerment in the first place.

I am also passionate about fighting child sexual abuse and promoting the rights of children. These are issues that have affected me in my own life, and issues which are still shockingly prevalent. Almost everyone I know has had some experience of it, and it’s silent because of what people might think… and because these acts are usually committed by someone close, like an uncle, which makes it inconvenient to expose them. To break the silence around sexual abuse, more people need to speak about it… normalise it… and by doing so, hopefully we can start to get our children talking, and make some real progress to eliminate these acts from our society.

Q:  How well (or not) is Bollywood doing around diversity and equity for gender?

[Kalki Koechlin]: The #MeToo movement has been very powerful and more women are coming out- even against powerful men. Our industry is also seeing more women producers, writers, creators and directors. I’ve worked with Konkona, Zoya Akhtar, Rakhhee Sandilya, Nitya Mehra… we’re seeing women produce strong content and who are not mild in terms of their messaging. It’s a real game changer..

[Kalki Koechlin]: I want to keep pushing forward and to stay relevant. What I do today will be very different to what I do in 10 years, we keep learning and evolving. I want to keep working on my craft and continue to fight for what matters to me, and to make the world better in my own way.