Close Search ×
Order the Book Subscribe Free
A Conversation with Katie Melua, One of Britain’s Most Successful Musical Artists, on Music, Art & Beauty. 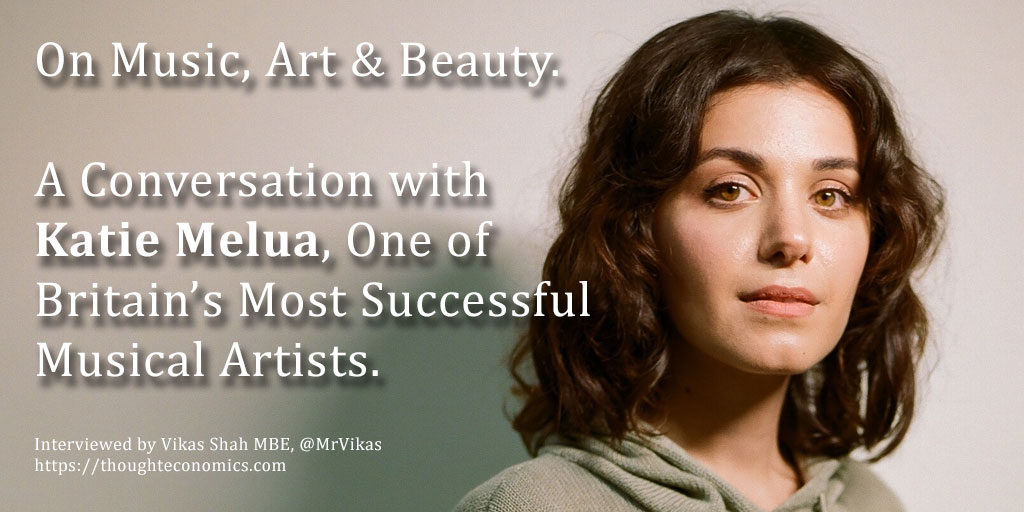 Katie Melua is one of Britain’s most successful musical artists, having sold more than 11 million albums and received over 56 platinum awards. She is originally from Tbilisi, Georgia and moved to the UK at a young age where she studied at the acclaimed Brit School of Performing Arts.

It is her extraordinary voice, and the ability to truly inhabit a song, that has been her trademark since the young 19-year-old school graduate first appeared in 2003 performing The Closest Thing To Crazy. One of the UK’s highest-selling female recording artists of all time, Katie has released 8 top 10 studio albums – ‘Call Off The Search’, ‘Piece By Piece’, ‘Pictures’, ‘The House’, ‘Secret Symphony’, ‘Ketevan’, 2016’s self-produced, critically acclaimed ‘In Winter’ and most recently ‘Album No. 8’ in 2020, which debuted at #7 in the UK’s Official Album Charts.

An accomplished songwriter, composer, and arranger some of Melua’s most well-known hits include Nine Million Bicycles, The Closest Thing to Crazy, and her now infamous cover of Wonderful Life. A constantly in-demand touring artist, Melua enchants her audiences worldwide with her uniquely powerful and captivating voice, flawless performances, and charming personality.

In this interview I speak to Katie Melua about the fundamental roles of music and songs in society. We talk about the beauty and tradition of music, what it does for us, our society, and her creative process. We also talk about the importance of expression, and the beauty of art.

Q: To what extent is your art an expression of you, and your life?

[Katie Melua]: I don’t think of what I do solely as an expression of me and my life; it’s more that I’m someone who loves what happens when a great song comes into my life. I become still. I see life as beautiful… majestic. I feel more like the song is doing something for me rather than me doing something to make the song… or to do to the song. That feeling of hearing a great song, singing, and writing a great song…. It’s addictive, moreish. I see no greater purpose in my life.

Q: What is the role of songs in culture?

[Katie Melua]: Songs are like a cleanse for the nervous system. I was walking through London the other day, and my mind was full of my to-do list, work, and so much more. I put on She’s Always a Woman by Billy Joel and I just suddenly felt psychologically lifted. There’s something in the essence of this song… it’s not just beats and energy (which a lot of modern pop is). It felt this song was filled with beauty, mystery, and love. I know it sounds cliched and perhaps, rose tinted. But that’s the closest I can get to describing that.

Songs are these magnetic creations of words and music, in very short form. A song needs to hit you in less than a minute and sometimes it can be an incredibly solitary, emotional experience where it’s just you and the imagined relationship with that singer – sometimes it can be anthemic, a grander experience where a song can get hundreds or thousands of people to sing, in sync, in a stadium.

Q: How has music changed in the 20th century?

[Katie Melua]: In the mid-to-late 20th century, we witnessed the idea that a hit can change the course of an artist’s life. I was lucky enough to have that experience when I was 19; when I sang songs like The Closest Thing to Crazy, Nine Million Bicycles and Wonderful Life – it was like a magic wand turned my life from being a teen to an internationally touring life.

The 20th century saw lots of leaps in the process of making music too. The gramophone improved the fidelity of the wax-master which replaced the noisy, acid-etch system. Over the decades that followed, there were huge leaps in technology – and of course we had the 1960s, a period where music really transformed society. Today, there’s certainly an imbalance to the extent that songs have a stronger economic drive; but the flipside of that is that songs are able to make much more money now too- and so it’s natural that people will do it for financial gain… or feel the pressures of finance in their art.  The world is big enough- and there are enough people with varying degrees of motivation and morality to pursue the craft of the song in different ways.

Q: Where does beauty come from in music?

[Katie Melua]: Music is very much about the state we get put in when we interact with something we find truly beautiful. It has this interesting invisibility. Music also allows you to question the truth.

Let me tell you about my own personal experience. In 2010, I had an episode of severe mental illness which lasted for two weeks. I really thought that was it, but I came out of it, and the process of experiencing that, and coming out of it gave me this personal idea about truth. I started to find beauty and inspiration in the most mundane things. Before I got sick, I had this chip on my shoulder about life – it was unfair and limiting. When I got better, even simple things like being able to wake-up, go for a walk, speak, and observe life, felt viscerally stunning and good. I found a state of being – a state that gave me perspective and feeling about life and my place in it.

Q: How would you describe your creative process?

[Katie Melua]: People are really tempted to compartmentalise the elements of songs. I often get asked about whether I write the lyrics or the music first. For years, I was obsessed with lyrics, and I thought that was the element of technique I had to perfect. I went on these great online courses at Berklee College, headed by a teacher called Pat Pattison, I turned to the wonderful books on poetry writing by Fiona Sampson, but there was still something else I needed to achieve the level I wanted to. There was a frustration. The real issue was about the state, mood and energy that I was feeling inside, and which was around me.

Song writing is about finding a vision that sets the mood and state for the work and process. Then you need to put in the time and the good vibes to achieve that vision.

And then about putting the time in with good vibes, to achieve that vision.

Q: What is the relationship between form and music?

[Katie Melua]: In song writing, we have very strict forms and structures, for example- rhythm and rhyme, and the commonality of the figure-four. European music often focuses on the four/four structure of beats in a bar, bars in a line, lines in a verse. That does create structures, and the opportunity then is to create beauty within that structure. I want to get to a point where I’m good at the technique such that it doesn’t show.

Making music envelops you. It’s a hypnotic process, and so having trusted ears around you is important to give perspective.

Q: What is the role of tradition in music?

[Katie Melua]: I think it’s very difficult to get away from the traditions of creating – whether it’s the figure four or equal measures. I have just completed a new project with the artist Simon Goff, we deliberately created some pieces that don’t fall into traditional forms, and also explored how architecture impacts sound. We looked, for example, at whether there was a link between the square shapes that make up our world, and our cities, and the square shapes that appear in modern music.  We have to consciously work hard to move away from traditional forces however I don’t dislike tradition at all, it represents how we feel!

Q: Do you create your music with a particular intimacy in mind, whether one-to-one or stadium?

[Katie Melua]: The aim is to create a sound that works everywhere. I want to record something that sounds amazing whether you are listening on little headphones, in the background at a supermarket, or in a huge stadium. There are occasions though, where I want to create sounds for certain spaces. It may be a design-led hotel, an airport, or even for an experience like walking – but it’s an interesting and rewarding creative challenge to think about the type of sound that works well in specific states and situations.

Q: What is the relationship between lyric and melody?

[Katie Melua]: Lyric and melody need to breathe as one. Lyrics are a cousin of poetry, but so too is the great fruit-and-veg-seller in the East End who has rhythm and art in their communication. The English language is just stunning too – I learned English at the age of eight, and Georgian is my mother tongue (which is similar to Italian, very operatic, and very up and down). English has a beautiful lilt to it – it makes it perfect for song.

For me, the process of writing lyrics is the process of designing words for the purpose of being sung. They’re not words to be read. They have air-time – it’s like sculpture. I love to play with vowel-sounds for example and try and design the bounce of a lyric line as aesthetically as possible to match that vowel sound. Ultimately – the actual story, and what the character is trying to say in the song has to breathe as one with the music.

[Katie Melua]: Without music, life would be hollow. Music is like food, we need it. It’s essential. It’s invisible, and doesn’t require our attention, and so it gets threaded into our lives. Music becomes a strong part of our memories, our sense of self, and identity.