A Conversation with the Secretary General of Amnesty International, Kumi Naidoo. 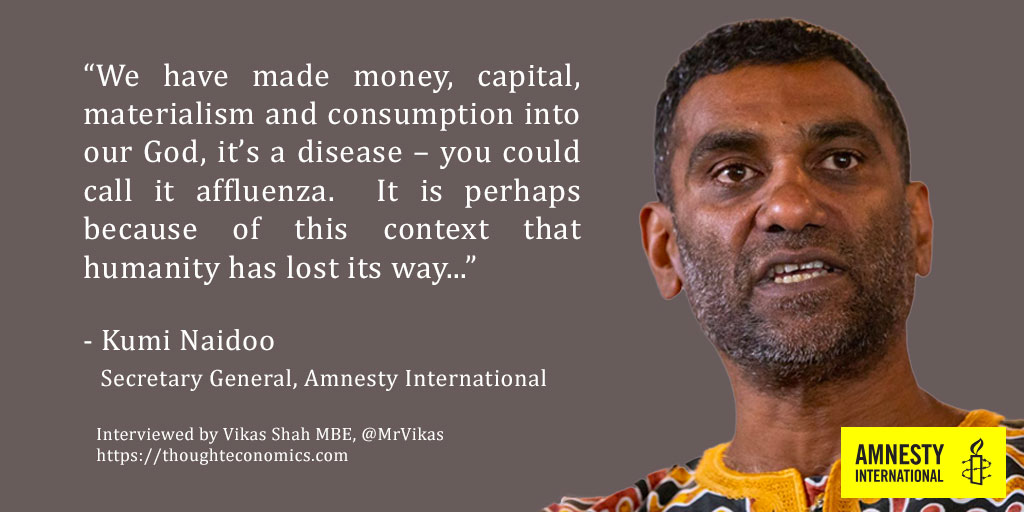 It took the unconscionable horrors of two World Wars to bring the international communities together to meaningfully define the rights of all individuals that existed from birth, irrespective of any factor such as race, sex, language, religion or nationality.

The Universal Declaration of Human Rights (UDHR) was proclaimed by the United Nations General Assembly in Paris on the 10th of December 1948 (Res 217A) as a common standard for all people and all nations.  It was the first time that fundamental human rights were asserted to be universally protected.   The rights protected are broad, ranging from high level rights such as access to justice, nationality, opportunity, health and speech through to specifics guaranteeing people freedom from discrimination, the freedom to participate in political, cultural and scientific life, and the right to marriage and to found a family.

We may feel intuitively that these are rights that should be shared and upheld by all nations, but the reality is rather different; and everywhere in the world, we find governments, corporations, and many others who subvert these basic rights of individuals and groups with devastating consequences.

It was these injustices that motivated British Lawyer, Peter Benenson to launch what became one of the world’s most profoundly powerful movements, uniting people in solidarity to support those whose freedom and dignity are under threat, Amnesty International.

To learn more about why our rights are being subverted around the world, and how Amnesty are working to fight these abuses, I spoke to Kumi Naidoo, Secretary General of Amnesty International.

Q: How did you find your passion for human rights?

[Kumi Naidoo]:  We have made money, capital, materialism and consumption into our God, it’s a disease – you could call it affluenza.  It is perhaps because of this context that humanity has lost its way, and the consideration of human rights has been subordinated to the interests of a handful of powerful people who sit at the top of the pyramid.

On December 10th, 2018, the world should have celebrated the 70th anniversary of the adoption of the Universal Declaration of Human Rights.  The sad reality is that if we tried to pass that declaration today, the UN General Assembly would fail to do so.  Firstly, we don’t have someone like Eleanor Roosevelt as an advocate for human rights, and where previously the US played a leadership role, Trump would no doubt block virtually every human rights pillar associated with the declaration.

My passion today is related to the fact that the job is not done.

I started my journey in human rights at the age of 15 where I was involved in the anti-apartheid movement; it was never about the right to vote in isolation, we were fighting for the right to vote and for people to have a democratic say in their economic, social and cultural future; a vision that has yet to be delivered.

Human rights were once defined primarily as human political rights, but in reality we have to also encompass social, economic and environmental rights to define our human rights; and the struggle for that is unfinished.

Q: Why are we seeing a growth of movements against human rights?

[Kumi Naidoo]: Firstly, we’re seeing the emergence of ‘big man’ political figures like Trump, Modi, Erdogan and so on.

Secondly, corporatist and state ownership means that our media tend to defend the status quo rather than contest what we can see in front of us.  This has been made worse by the right wing, particularly Trump, who have persuaded significant numbers to believe that the media is the problem and others such as the Russian State and Cambridge Analytica who have driven campaigns of misinformation, fake-news, and who have abused social media to deceive people.

Thirdly, the so-called human rights friendly governments of Europe and elsewhere have allowed inequality to reach utterly indefensible levels, meaning that the voting public have lost faith in traditional political-parties who the working-class feel have largely colluded with neo-liberalists.

Q:  How can we fight against human rights abuses in a world that seems to be moving away from human rights?

[Kumi Naidoo]:  It’s increasingly difficult to be a human rights defender in todays’ world.  We have seen the emergence of pseudo-fascist tendencies and a concerted attack on our civic space, and those who defend it.  As I talk to you today, one of our researchers in Mozambique is in prison, we’re trying to get him out, he was arrested two days ago without reason…. Our offices in Nigeria were raided two days ago… The Modi government has frozen our bank accounts in India to make it impossible for us to operate… the Thai government will not renew the registration of our South East Asian offices and the Chair of the Board of Amnesty Turkey has spent 14 months in jail without charges.  The situation is even more horrific when we go outside of the international NGO space and look at grass-roots activism.  According to Global Witness, 4 environmental activists are killed somewhere in the world each week, predominantly in Latin America but also in Africa and Asia.  These are individuals doing everything from defending water, land and forests to the rights of indigenous communities.

Mahatma Gandhi once said, ‘first they ignore you, then they laugh at you, then they fight you, then you win…’ the good news is that society is reaching a critical mass of influence meaning that today, people cannot ignore us, and cannot laugh at us, they have to fight- and if Gandhi was right, we are near the breakthrough towards winning.

Q:  What is the role of education in regards to human rights?

[Kumi Naidoo]:  There has been a pathetic failure of governments to invest in educating people about the rights that they hold and enjoy; I suspect because if people knew their rights, they would claim them and put the governments of the world under pressure.

Governments around the world have invested far too little in human rights education, and I hope this changes, it is the responsibility of government to educate citizens on their human rights, and this matters at school and university level.  We must continue to push our governments to do more.

Q:  How can civil society play a role in defending human rights?

For example; the leadership that’s needed to make the changes that we need to address climate change is based around a common goal of shifting to clean, green, renewable energy rather than dirty fossil-fuels.  That kind of transition is significant, and happens across all parts of society.

Right now, the issue of climate change is also a fundamental human rights issue, because it threatens humanity’s ability to exist.  We should be reaching a conclusion that all parts of society must be mobilised to get involved- and that’s where the individual action comes in… recycling is a good place to start, but not a good place to end!  Individuals can also use their voices to highlight injustices we see around the world, and which impact us.  We are no longer blind to the fact that we’re all complicit in the problem; and we have the power to ensure governments implement change and not just pay lip service to it.

Q:  Are you hopeful about the future?

[Kumi Naidoo]:  We are facing a global catastrophe, one which should be a bigger motivator for us to come-together around a common cause than even World War II.  Climate scientists tell us we’re facing an existential crisis, and unless we get emissions under control in the next decade, that climate change will be irreversible.  The message is loud and clear, but government, business and civil society suffer from a terrible case of cognitive dissonance- a denial of a reality that would require fundamental changes in how our world works.

Leaders need to communicate the seriousness of the situation without sanitising it, and also without demotivating the population.  You don’t want people to think, ‘oh, it’s too late… what’s the point….’ – In Martin Luther King’s famous speech, he said he had a dream not a nightmare.

It is extremely difficult to speak to hope at the moment when we have converging nightmares and crises of inequality, climate change, the rise of fascism and more; but with climate in particular, we have a very limited window of opportunity to act, and we must rise to that.   With issues such as gender equality, we’ve been fighting for so-long that it’s pathetic that we’ve not made more progress; perhaps because there isn’t a ticking clock giving us a sense of urgency like we see with climate change.

Q: What does it mean to live a life with dignity?

[Kumi Naidoo]:  There are basic sets of rights that people require to have the dignity which allows them to have agency over their own lives.  Freedom of expression, association and assembly give you a voice, allow your opinions to be expressed, allow you to form and associate to organisations that advance interests, and give you the right to protest.  If these rights are not in-place as a foundation, you’re not addressing the most basic of human rights.

It is perhaps then useful to use something like Maslow’s Hierarchy of Needs as a reference point.  To flourish we need food, shelter, peace, and the right to live with dignity economically, socially and culturally.  Basic dignity comes from the ability to feed yourself and your family and to have a decent job; but from there on, living a dignified life means that you are able to fully enjoy the broad sentiments that are laid out in the Universal Declaration of Human Rights.

Up Next: On Identity: A Conversation with Kwame Anthony Appiah