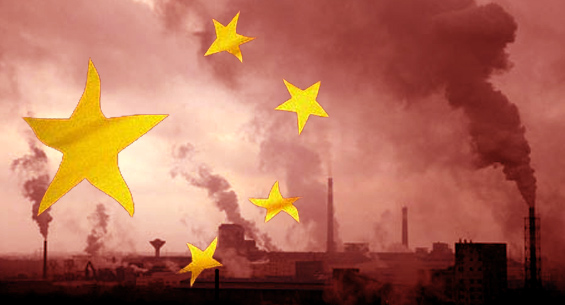 In his 1817 book, “On the Principles of Political Economy and Taxation“, David Ricardo explained the principle of economic comparative advantage.  He drew example from the production of wine and cloth in England and Portugal and explained, “In England it is very hard to produce wine, and only moderately difficult to produce cloth. In Portugal both are easy to produce. Therefore while it is cheaper to produce cloth in Portugal than England, it is cheaper still for Portugal to produce excess wine, and trade that for English cloth. Conversely England benefits from this trade because its cost for producing cloth has not changed but it can now get wine at a lower price, closer to the cost of cloth. The conclusion drawn is that each country can gain by specializing in the good where it has comparative advantage, and trading that good for the other.” It is this simple principle which has formed the substantive basis for global trade, particularly during the period , within recent globalisation, where China became the world’s producer of most goods.

Where is the China advantage?

It is important at this stage to understand the nature of what has helped China develop and maintain its competitive advantage.  If we assess the cost of raw materials, land, building and infrastructure, China never had such a great advantage as to create its dominant position.  The answer? labour markets.

Chinese manufacturers have relied completely on having an almost unending supply of individuals within the labour market who are able to provide their services at a rate so low, that the cost of producing the goods was dramatically cheaper than anywhere else in the world.  This created a labour market arbitrage where the manufacturer (and end buyer) could take advantage of the price difference (in labour) profiting from the imbalance.  With a culture geared around family and business ties, with an incredible work and education ethic, this arbitrage worked extremely well for many years (since the earliest days of trade with China).

The End of Arbitrage.

In recent months, we have started to see this arbitrage opportunity break down- and while the Chinese establishment are usually excellent at ensuring such news doesn’t break international borders, in recent months two high-profile ‘cases’ have brought this phenomenon to the public eye.

Foxconn Technology Group, owned by a Taiwanese billionaire, who manufacture for household names such as Dell, Apple, and Hewlett Packard, had a spate of suicides in their factories.  The firm was forced to initially pay out compensation (amounting to USD 14,600) to each family affected by a suicide, and then after strong negotiations, raised the basic salary of its workers by over 70% over a three month period.  They have since stopped the suicide payments (citing that they felt employees were gaming the system to claim the money for their families benefit at their own cost) and are considering relocating factories to more northern provinces in China (where labour is cheaper, and less demanding).  The firm is also renegotiating supply contracts, ensuring that the customer (and hence, consumer) pick up the bill.

Automotive manufacturer Honda has had similar issues, with regular strikes occurring after wage hikes of over 20%.

So why are cracks appearing now?

Firstly, while the labour market is plentiful and growing (with over twenty million new members between now and 2015) the strata of population most relevant (between the ages of 15 and 24) is set to decline by almost 30% over the period.  China is also experiencing greater migration as young people leave provinces for cities to access greater opportunities.   This creates a slow contraction in the total labour available for a growing number of jobs, creating inevitable wage increases as demand for labour exceeds supply.

Secondly, a boom in communications technology has meant that even in remote provinces, individuals have access to mobile telecommunications and broadband internet, and regardless of how hard the Chinese censors try to control communication, individuals are still able to see they are getting a raw deal, not only relative to other countries, but terms of the working conditions, rights and settlements they receive.  Growth in technology has also allowed Chinese workers to group and mobilise, to take action against these injustices.

Thirdly, while many workers were agreeable to subsist, the very nature of what it means to receive a subsistence wage has changed- as commodity prices for food and energy have increased significantly in recent years, and the nature of what is required to subsist has changed.  In many cases, access to communications and internet technologies, together with basic healthcare, and other provisions are seen as a necessary element for an individual (at any stage of development) to participate in society.

The Chinese political establishment will not change regulations on labour overnight, but significant changes are sure to emerge over the next decade which will dramatically reduce China’s ability to profit from labour market arbitrage.  The net result will be that China, like most other countries, will begin to seek out value-added services to sell (taking advantage of a large educated workforce), and will begin to export products rich in intellectual property with higher margins.  China also benefits from having an internal economy larger than Europe’s (in population) ensuring strong demand for goods and services to support economic growth (especially as the population becomes richer).

For the rest of us, who have come to rely on Chinese export prices, there will be changes.  The opportunity cost of manufacturing locally versus in China may diminish significantly, springing life into some manufacturing industries in Europe and the USA (perhaps even allowing us to export into Asia).  Similarly, we could even see a big increase in partnerships between Chinese, European and US firms, as capital and knowledge mobility begin to drive economic output.

For Africa too, there is a role to play here, as the most obvious and hungry competitor to take the lead in manufacturing- with a huge population who need to work, and the infrastructure to do it, this continent could become the next manufacturing led economic boom.  The Chinese are well aware of this, and hence, over the past five years, have been investing billions in infrastructure and communications within Africa, ensuring they profit from the mobility of manufacturing trade, and changes in their own economy.

This phenomenon is a profoundly important global trend which cannot be ignored.

Up Next: A Conversation with Hamdi Ulukaya, Founder and CEO of Chobani