Learned Helplessness in Democracies and Economies 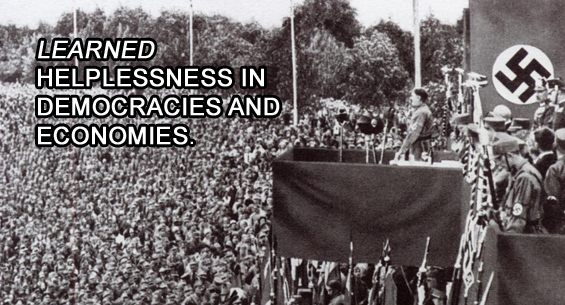 In my article of September 01st 2010 “Thinking Ourselves Into Another Recession” I discussed how psychology plays a critical role in the well-being of an economy.  Using the paradigm of eating disorders, we discussed how:

“…When we talk of economic confidence, business confidence, or even confidence in global markets, we are talking of the mindset of the majority of participants in that market.   In a ‘booming’ market, participants feel happy, with little sense of risk- so they are happy to invest in their businesses, create jobs, buy property, and drive strong economic figures.  In a recessive ‘bust’ market, we see a standard human predator response, “a flight to safety” where participants hoard their capital, run towards safe assets, cease creating employment, cease purchasing property, and create an overall dip in economic figures.  The important lesson, therefore, is for us to realise the psychological battle the economy is facing- being a state of collective depression, with markets moving through a daily motion of binge and purge- leading to either a collapse into increasing volatility, or… if we collectively gain positivity, a move towards greater wealth, and economic success. “

To extend this further, let’s look at an experiment, conducted in 1960 by leading Psychologist Martin Seligman.

Seligman performed an experiment involving three different groups of animals, who were tasked to jump over a little hurdle- from one side of a box, to the other- to escape or avoid an electric shock.  One group was given no prior exposure to such experiments, one had already learned to make a response (to escape from shock) in a different setting, and the third group had been given a series of shocks they could not escape.   While the first and second groups quickly figured out how to escape the shock, the third group- rather remarkably- failed to learn, not because they didn’t have the chance to, but because they didn’t even try to escape.  They became passive, lying down and taking the shocks.  In this one experiment, Seligman discovered the phenomenon of “Learned Helplessness” which later made a monumental impact on psychology.  As was observed in “The Paradox of Choice“,   “Seligman and his colleagues suggested that animals in this third group had learned from being exposed to inescapable shocks that nothing they did made a difference- they were essentially helpless when it came to controlling their fate.  Hundreds of studies leave no doubt that we can learn that we don’t have control.  And when we do learn this, the consequences can be dire.  learned helplessness can affect the future motivation to try.  It can affect future ability to detect that you do have control in new situations.  It can suppress the activity of the body’s immune system, thereby making helpless organisms vulnerable to a wide variety of diseases.  And it can, under the right circumstances, lead to profound clinical depression.  So it is not an exaggeration to say that most of our fundamental sense of well-being crucially depends on our having the ability to exert control over our environment and recognising that we do.”

There is certainly empirical evidence of this in the way societies behave.  Every dictatorship in the world is an example of a society exhibiting learned helplessness, from Nazi Germany to the current regime in North Korea, citizens have all but accepted they have no control over their environment- and become passive (and hence open to manipulation and control).    How else could Hitler, for example, pass legislation through an otherwise rational population for the eradication of all Jews from civil society?

In contrast to this, the effect on society when people realise they do have control is profound.  “Protests following the 2009 Iranian presidential election against the disputed victory of Iranian President Mahmoud Ahmadinejad and in support of opposition candidate Mir-Hossein Mousavi occurred in major cities in Iran and around the world starting June 13, 2009. The protests were given several titles by their proponents including Green Revolution, Green Wave or Sea of Green, reflecting presidential candidate Mousavi’s campaign color, and also Persian Awakening.  The events have also been nicknamed the “Twitter Revolution” because of the protesters’ reliance on Twitter and other social-networking Internet sites to communicate with each other.“.  In this case, the population- through tools such as Twitter, realised they did have a choice, did have a voice- and were able to escape this malleable, depressive state, and try to create change.  Similar examples can be found throughout history including the 2007 anti-government protests in Burma.

The Problem With Democratic Economies

Even in our own developed democratic economies, we see very similar behaviours.  As much as we know that we have a notional say in our governance through voting and other means- the fact remains that the majority of voters in the UK, Europe and the USA feel a sense of disconnect between themselves and their political and economic environments.  As Seligman identified, “…fundamental sense of well-being crucially depends on our having the ability to exert control over our environment and recognising that we do” so when a voter or economic participant feels they have no control over their environment (be it because of a recession, policies they disagree with, decisions made outside their gaze, and so forth) they tend to play a more passive role in their polis or economy as a result.

Academically, this sentiment also holds true.  In a 2005 paper entitled, “The political economy of freedom, democracy and terrorism” by Kurrild-Klitgaard, Justesen and Klemmensen of the University of Southern Denmark, the researchers identified that, “other components of liberal democracy—civil liberties, rule of law and free markets—may play a larger role as long-term deterrents than simply having free elections. In contrast, the good news is that if the country goes all the way to a more complete liberal democracy, then it is likely to significantly decrease terrorism and political violence.”

For those wishing for paradigm from the corporate world- we can see how organisations who genuinely give their employees the knowledge and ability to exert control over their employers strategy do extremely well (Google and Apple to name just two) with many others such as IBM- who operate a far less empowered governance methodology- simply unable to replicate the growth, innovation, and agility of their empowered counterparts.

The underlying lesson here for our political, economic and corporate leaders is rather simple.   Saying people have the ability to participate in decisions, and actually ensuring they can, should not (as the case often is) be mutually exclusive.  Our nations, economies and companies can perform far better where we genuinely allow and encourage participation in governance and policy from all stakeholders.

Up Next: A Conversation with Harvard Professor, Ranjay Gulati, on Deep Purpose: The Heart and Soul of High-Performance Companies.