Learning About Ourselves Using Technology 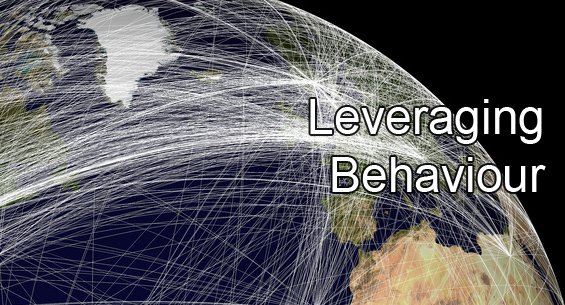 At an academic level, behaviour refers to, “…the actions of an organism or system, usually in relation to its environment, which includes the other organisms or systems around as well as the physical environment. It is the response of the organism or system to various stimuli or inputs, whether internal or external, conscious or subconscious, overt or covert, and voluntary or involuntary.”

Contextualising this, researchers from fields as diverse as psychiatry, psychology, sociology, economics and anthropology have spent many years empirically studying our behaviours, activities and interactions, with the aim of getting a better understanding of how our species works.

The ‘how’ can, itself, be further contextualised, as studies of behaviour can be used to study:

How armies behave in war (war-gaming and battlefield simulations).

How consumers move around retail stores.

How crowds behave at events.

How traffic moves in cities, and in the skies.

In each case, we have a macro ‘theatre’ (such as a retail store) with ‘actors’ (such as consumers, store-workers, etc) and their ‘actions’ (behaviours) which dictate how they interact with the theatre itself, and other actors within it. The aim of these studies would be for the analyser to then design the system (theatre) better to create a more efficient or positive outcome. The retail store designer may, for example, wish to study behaviour so as to maximise footfall in each aisle, the military planner may wish to optimise their attack strategy, and the urban planner may wish to create the most efficient traffic flow.

The Renaissance of Technology

The last decade in particular has seen a massive increase in the power of computers- specifically the amount of data they can store and exchange, together with the speed at which they can perform calculations. This increase has been combined with the ‘naturalisation‘ of many technologies meaning that we, as individuals and groups are creating huge pools of data about everything from our locations to interactions with other individuals and groups. Not to mention the impact that has been felt by the masses of businesses that look to modernize their functions in order to fit in with the new technologically minded culture they look to profit from. To do this it is essential to take advantage of the digital transformation framework.

Mobile telephones are perhaps the most ubiquitous of all ‘new’ technologies, and it is for that very reason that researchers such as Ramón Cáceres cite how they, “…can really revolutionize the study of human behavior,” His team worked in New York and Los Angeles, analysing the call-detail-records (CDR’s) of millions of phone users, and as MIT Technology Review cites, “The group found that, on average, people living in Manhattan travel 2.5 miles most days, compared to five miles in Los Angeles. ‘But we also found that when you look at the longest trips people make, people that live in New York go significantly further, 69 miles on a weekday compared to 29 in Los Angeles’, Cáceres says.” The publication continues, giving example of, “Another study, presented by Francesco Calabrese, a research scientist at MIT, and colleagues correlated location traces from roughly a million cell phones in greater Boston with listings of public events such as baseball games and plays, showing how people traveled to attend these events. “We could partly predict where people will come from for future events,” the team wrote in a report on their work, suggesting it could be possible to provide accurate traffic forecasts for special events.”

The above examples may give urban planners a better idea of how to allocate investment and resources to ensure that transport systems cope with how people actually use them (a common complaint among any city traveller) but the same algorithms and techniques based on such data-sets can also aid businesses to better understand how consumers behave.

For many years, CRM (Customer Relationship Management) has been pushed as one of the best methods of building an agile business, which is why many business have made use of things like these business solutions by W-Systems to help when it comes to their customer relationships- the more we know about our customers, they said, the better we can serve them. This logic proved true, and as more firms such as PieSync adopted the mantras of CRM- they very quickly saw many benefits- from sales, to procurement, and allocation of resource. CRM has, though, been very much based on fairly basic ‘reads’ from the data.

Customer (or group) to Company to Supplier

These reads provide useful trend and planning information, but with recent advances in technology, software is able to yield much more detailed and pervasive information. Many ecommerce providers, for example, integrate their sites with the likes of Facebook- this not only allows them to promote their products through the powerful medium of social-networks, but also allows them to gain an unprecedented level of information on ‘who’ their customers are as individuals and groups- this data shows trends of common interests (e.g. if our customer likes X they will typically also like/dislike Y) but also reveals the intricate web of social and commercial relationships (and loyalties) which we have. There are loads of different popular trends in ecommerce technologies, so if this is something which you are thinking of using then you have to make sure that you have the right one for you.

By understanding the interests of customers (such as sports, music, theatre) and their work patters (start/finish times and locations) taxi firms may be able to better position vehicles and drivers to ensure greater availability for customers, and a higher yield for the firm.

By understanding social trends, a travel firm could tailor the structure of packages to suit demand for numbers in the group, activities, destinations, and time of year. They could also analyse relationship data of networks to show whether passengers were more or less likely to visit certain destinations after others.

By monitoring chatter on social networks, pharmaceutical firms are (already) better able to plan stocks and delivery of drugs based on the spread and development of conditions through groups. This was seen clearly in the recent Swine flu outbreak, where technology helped government organisations and pharmaceutical firms deal with developing demand patterns for drugs in different locations.

As you can see, the potential for these technologies is huge- and the more ubiquitous our use of technology becomes, the more data we create for these patterns to emerge. As businesses we must, therefore, remain acutely switched on to the data which is being generated within our ‘theatres’ and understand what patterns and information we can retrieve from it to better understand our market, and the opportunities within it.

It is, as many have observed, the smartest businesses, which will become the leaders of the future.

Up Next: A Conversation with Mark Cuban, Entrepreneur, Investor & Philanthropist