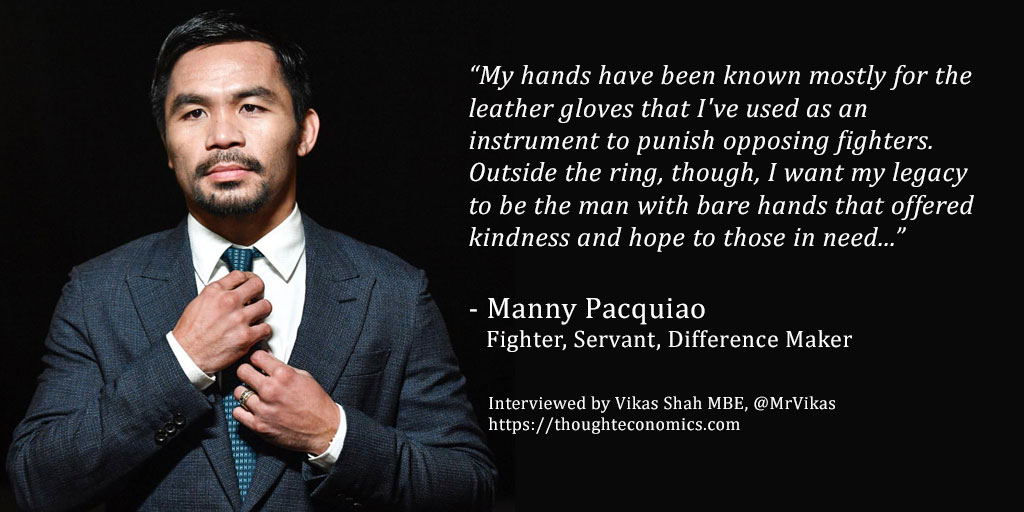 When I first laced up a pair of gloves as a 16-year old kid, it was January 2, 1995, and fame and fortune were not my primary motivation.

I was fighting for the next decent meal and to provide for my family, the best way I knew how.

Just years before that, I had fled from our small town in the province and stowed away on a boat to try my luck in the treacherous, unfamiliar bright lights of Manila, the capital city.

I was unsure, scared of the unknown, and young. But I was forced to defy the odds and grow up quickly so I could help my mother raise my five siblings.

Selling newspapers and donuts in the mean, unforgiving urban streets helped make ends meet. The daily grind taught me the valuable lessons of working hard to put a shirt on one’s back, food on the table, and a roof over my family’s heads.

I spent some nights sleeping in the ring apron of an empty gym and in an exchange for janitorial work in and around the property, I was able to sleep there for free. The gym was humid and swarming with mosquitoes, but I soldiered on to keep my dream of becoming a world champion alive.

My first eleven fights went smoothly, and I won all of them. The pay was low, but the joys were high as I stayed on track to becoming a champion.

And then in my twelfth bout, on February 2, 1996, everything came to a screeching halt. I was knocked out in the third round by a fledgling contender. I just knew this would set me back.

It was a rude awakening and it felt like my world was crashing in on me. It was a rough few days after the fight but instead of choosing to feel sorry for myself, I used the defeat as fuel for more determination. I knew I needed to be more focused, more disciplined. Looking back, it was one of the best things that could’ve happened to me.

RISING FROM ADVERSITY. I rebounded well from my first taste of defeat and won my next fifteen fights, annexing the World Boxing Council (WBC) flyweight title along the way.

Having outgrown the flyweight class, I moved up a few pounds to the super bantamweight division where I conquered seven of my next eight opponents. I felt like it was just a matter of time.

They say that when preparation meets opportunity, amazing things can happen. Well that was the case when I got the chance to prove myself on the big stage. I had been training so hard, staying disciplined, and trying to be as patient as possible in waiting for that day to come. And when it did, I was ready.

I took a fight on two weeks’ notice and it was the chance I had been waiting for. It was June 23, 2001 on the undercard Oscar De La Hoya, who was already on his way to the boxing hall of fame. Lehlo Ledwaba’s opponent backed out so I filled the spot. I was 24 years old, and with a sixth round KO, I was able to win the 122-pound IBF title. That became a career-defining night.

Coming to America opened so many doors for my career. As I continued to move up in weight, I tried to fight the best of the best, a journey that allowed me the honor to fight some of the greatest in the sport — Oscar De La Hoya, Erik Morales, Marco Antonio-Barrera, Miguel Cotto, Juan Manuel Marquez, Ricky Hatton, Shane Mosley, Joshua Clottey, Antonio Margarito, Timothy Bradley and Floyd Mayweather.

There have been a few losses, some more painful than others, but the lessons I learned through each of them were invaluable.

After suffering a knockout defeat to one of my greatest rivals, Juan Manuel Marquez, people thought my career was over, but I came back even hungrier. I wasn’t just fighting for myself. I was fighting for an entire country and millions of fans around the world who believe in me. That is why I will always give 100% in and out of the ring.

The shortfalls never weakened my resolve. In fact, it was the opposite, as they taught me lessons on patience, resilience and perseverance. There are really no defeats in life, just opportunities to become better, stronger.

I may not have gone undefeated, but I’ve accomplished something no other boxing champion ever has —- capture titles in eight different weight divisions.

This is something I’ll always be able to hang my hat on. As I near the end of my fighting career, I cannot help but think of how much God has blessed me.

CHARITABLE PURSUITS. Even when I reached the top, I never forgot where I came from. I wondered about the millions of my fellow countrymen who didn’t have the chance I got and continued to languish in poverty.

With the fame and modest personal fortune boxing has blessed me with, I knew I had the power and the platform to help. But I realized that I can do better and so I entered the realm of public service, a vehicle that, when driven properly, can reach further than any private individual ever could.

After two terms in Congress, I was elected to a seat in the Philippine Senate in 2016 and have continued to advocate for the poor and the less fortunate.

Although being Senator provides a wider platform than the Lower House, the limitations of government funding and the shackles of bureaucracy can only allow me to do so much.

And that is why we created the Manny Pacquiao Foundation, a charitable institution that allows me to help the less fortunate unencumbered by systemic restrictions.

Jinkee and I have felt like it was our duty, and we have done our best to give back, but we want to do even more. We want to build more homes, schools, hospitals, and eventually further our reach into other nations. We are only two people though and we want to use our platform and influence to inspire people around the world to serve others.

My hands have been known mostly for the leather gloves that I’ve used as an instrument to punish opposing fighters. Outside the ring, though, I want my legacy to be the man with bare hands that offered kindness and hope to those in need.

But we cannot do this alone.

If you would like to be a part, you can help us in this cause at PacquiaoFoundation.org. Together, we can make the world a better place.

Manny Pacquiao’s story begins as a stow-away on a boat bound for Manila, determined to pursue his dream of becoming a boxer and fighting to free his family from abject poverty. To millions of people around the world, Manny’s story validates their own determination to work hard and overcome the obstacles in front of them.

Manny admits that he continues to fight because of his love for the sport, but also because of how much joy it brings to others. Manny has always done everything he can to give back and fight for the less fortunate. He has devoted himself to public service and donated more than one-third of his career earnings to charity. It is his goal to be an instrument of hope and change around the world. Even those who do not follow boxing cannot help but be inspired by an icon whose humility and heart for people transcend the world of sport.

Up Next: A Conversation with Marianne Williamson – Author, Activist & Spiritual Thought Leader