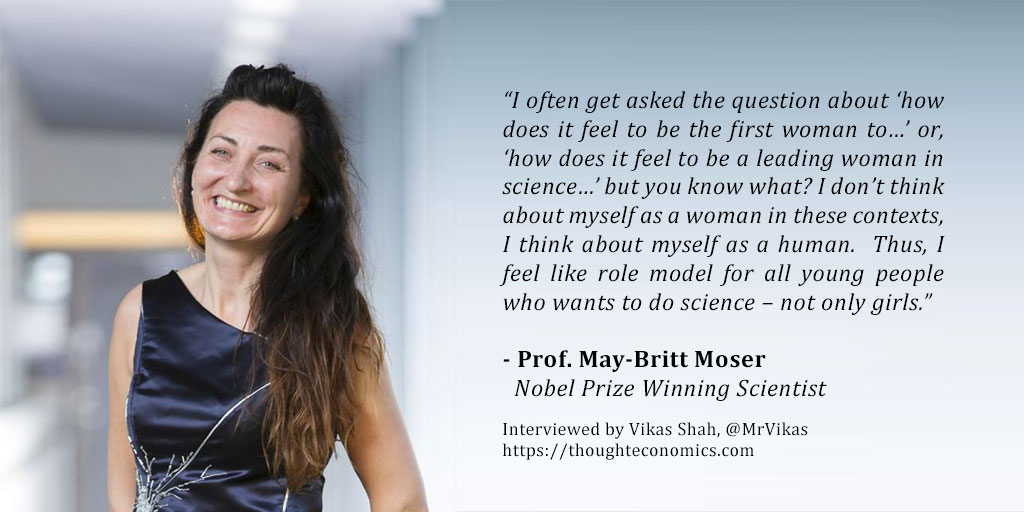 The fact we (as mammals) know where we are, and can navigate our way to other places was- for a long time- one of the biggest mysteries in our understanding of the brain.  In 2005 May-Britt Moser,  with her then husband Edvard I. Moser, solved this mystery; discovering grid cells in our brain that are believed to constitute our positioning system.  Their work has given us some of our most fundamental insights into our cognition, and led to May-Britt and Edvard being awarded the 2014 Nobel Prize in Physiology or Medicine.

May-Britt is a truly remarkable individual.  She is Founding Director of Centre for Neural Computation and Co-Director of the Kavlil Institute for Systems Neuroscience at NTNU and is also one of our world’s most skilled science communicators.

Over the past decade we have made significant process encouraging more diversity in science but the truth is that women still account for a minority of the world’s researchers.  I spoke to May-Britt to learn more about gender, diversity and science.

Q: How has gender bias manifested in your career?

[May-Britt Moser] At some point in our lives, we have all experienced other people who have tried to stop or discourage us. I have assumed that when this happened to me it was not because of the fact that I am a woman– but rather because they were ignorant or didn’t know what they were doing.

Yes, I could feel hurt sometimes, or get a sense that someone tried to stop me from doing what I wanted, but I did not put the cause of that bad behaviour down to my gender.

Maybe I’m naïve. I always try to excuse such behaviour in others, at least until any ill intentions get obvious. Then I will try to put a stop to it. Naivety can be useful though. I am probably harder to offend.

We all experience challenges. If you always make one thing your excuse or let other people drag you down because of something like your gender, it will become your prophecy.

When you don’t get that grant you applied for, you could think ‘it’s because I’m a woman’. But there could be other reasons. If you convince yourself, ‘this  happened because I’m a woman,’ your own thoughts may stop yourself from trying again the next time.  Whatever reason, you will never know for sure. You just have to keep fighting.

Q: Why does diversity matter?

To really empower diverse environments, you need trust – and the freedom to speak-up.  If there is hostility towards your gender, race or age in your environment, you may not speak up… you may not question bad ideas… you may not put forward that great idea.

Q: Have you ever felt a lack of female role models in your career?

[May-Britt Moser] In Norway, we had a female Prime Minister, Gro Harlem Brundtland, since 1981. She later became Director-General of the World Health Organization. She is a strong woman.  That was inspiring, of course. But I believe that if you have a passion for questions, and if you have the courage, then you don’t need a model that is exactly like yourself.  I always thought that nothing or no one should stop me from doing what I like.

Thus, as a PhD student, my supervisor, Per Andersen, inspired me because he gave the most beautiful talks and he believed nothing was impossible – so enthusiastic – and I wanted to be like him.  I thought, ‘I can do that’.  I was also fond of Eric Kandel and his beautiful studies on the sea slug. I was so inspired, and it made me more confident in my own research on structural changes in rodent brain cells after diverse experience. If the sea slug can get more connections between the brain cells after leaning, mammals might also get that.

Q: Do you ever feel responsibility as a role model?

[May-Britt Moser] I often get asked the question about ‘how does it feel to be the first woman to…’ or, ‘how does it feel to be a leading woman in science…’ but you know what? I don’t think about myself as a woman in these contexts, I think about myself as a human.  Thus, I feel like role model for all young people who wants to do science – not only girls.

But I’m proud to be a woman.  When I received the Nobel Prize, an engineer named Matthew Hubble wanted to design a dress for me to show both that I’m a woman and the science I do. It was brilliant! Whenever someone asked about my gala dress, I could talk about my research!

I think there might be a lesson in there too: to make use of what we can, not to make fun of things, but to have fun.  And to show off in a positive way. Even young girls would say ‘wow, what a lovely dress, and it even has brain cells’.

Q: What is your message to that generation of young people who feel they can’t progress because of their gender or ethnicity?

[May Britt Moser] I feel I am not the right person to address this question, because I live in a country where the fight for gender equality has come a long way. Women and men before me have fought so that females are as valued and can do what they want.  I am lucky because I can focus on my qualities as a human and a scientist, and not focus on the bare fact that I am a woman. However, I think too many have been stopped from pursuing their dreams because of a negative focus on gender, which you can find in many societies. I wished you could have asked this question to people like the 2014 Peace Prize winner, Malala Yousafzai instead of me. As a child she lived in a refugee camp, and was shot because she believed that females have the right to get education. She is now fighting for education for all girls. When I met her I said; thank you for doing this marvellous job! Then she said, “I would like to thank you for what you are doing for women”. Before this chat I had not thought through the importance of having a successful female role model. What a fantastic human being she is, Malala, – and she is just one of the greatest examples on how to keep fighting for what you want. If you don’t give up, you might become that entrepreneur, that scientist, that professor, that you are capable of being.

Q: How should we respond to bias?

[May Britt Moser] Bias means your mind, your experiences, and your knowledge is too narrow to take in and truly appreciate the person standing in front of you. Sometimes the cause of disrespect is ignorance… All of us probably have biases in areas that are unfamiliar to us, so maybe we could start by addressing ourselves. If there is something we don’t know too much about, maybe we can try to be honest and just say ‘I’m sorry, I don’t know anything about this’.

We have to hold all humans in respect – so this does not only apply for gender. We have to interact with everyone so no one feels left out or ashamed; these negative emotions can kill curiosity and creativity.  If people can sense that they belong, they become more creative and will even help others, and that is important. That is the philosophy in our lab.

To really empower diverse environments, you need trust – and the freedom to speak-up.  If there is hostility in your environment towards your gender, your race or otherwise – you may not speak up… you may not question… you may not put forward that great idea.   This is also true for children.

All ideas and questions might be very interesting, and children has to experience that their questions are equally valued as those coming from a grown up or a Nobel Prize winner. We as adults need to allow children or anyone to ask the questions they want to without laughing or being embarrassed. I just recently gave a lecture at a science camp for young children, and the leaders said, ‘do you really want to have questions from the children?’.  I said, ‘yes of course, that’s why I’m here!’.  ‘But they might ask weird questions and maybe you don’t have an answer’.  And then I said, ‘if I don’t have an answer, I tell them I don’t have an answer’.  And I got the wildest but so smart questions!  I was talking about memory, spatial navigation, and the different brain cells that are involved, and then a young girl, somewhat shy said ‘but now you’ve told about all this electrical activity in the brain and these cells that are active, how do we get memory out of this?’.  And I said, ‘That’s a great question, but you know what? I have no clue!’.

I told her, ‘I can tell you which brain areas are involved, I can tell you about the cells, I can tell you about the small electrical potentials going from one cell to the next, I can tell you that in one environment these cells are active and in another environment, other cells are active.  But I don’t understand how it is to have conscious memories’.  And then I gave her back a question and said, ‘you know… now we have robots… and if we coded these robots with all the knowledge that we have about memory and how it works, do you think that this robot would be conscious about this memory?’  Who knows?’ Maybe this girl will tell me one day the answer to this very important question. We just need to let her know that she, as a girl, can.

Professor Moser is Founding Director of Centre for Neural Computation and Co-Director of the Kavlil Institute for Systems Neuroscience. PhD in neurophysiology, University of Oslo 1995.

May-Britt Moser is interested in the neural basis of spatial location and spatial specifically and cognition more generally. Her work, conducted withEdvard Moser as a long-term collaborator, includes the discovery of grid cells in the entorhinal cortex, as well as several additional space-representing cell types in the same circuit.

Her group is beginning to unravel the functional organization of the grid-cell circuit as well as its contribution to memory formation in the hippocampus.

May-Britt Moser was a co-Founder of the Centre for the Biology of Memory, a Research Council-funded Centre of Excellence from 2003 to 2012, and has taken on the Directorship of the Centre for Neural Computation, with a life time from 2013 to 2022.