A Conversation with Astronaut, Mike Massimino. 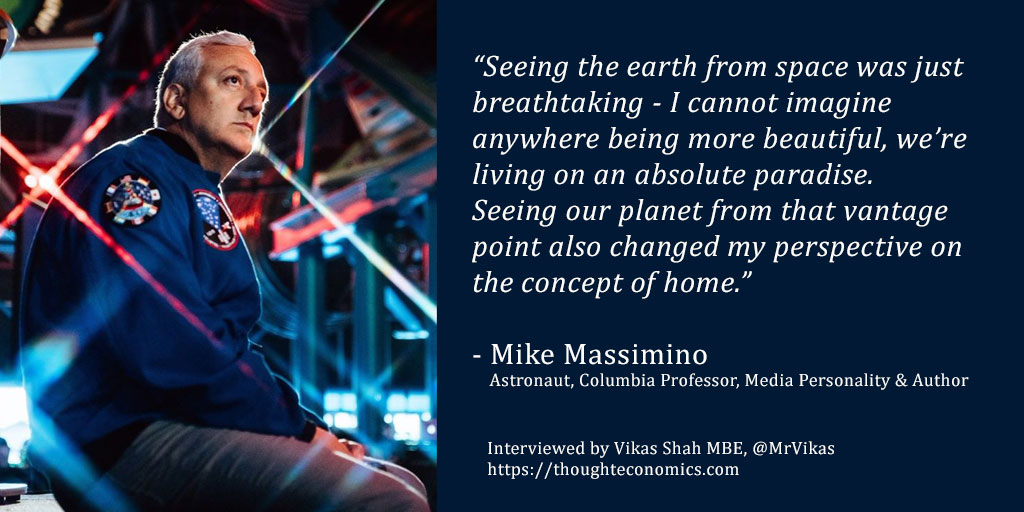 “Seeing the Earth framed through the shuttle’s small windows versus seeing it from outside was like the difference between looking at fish in an aquarium versus scuba diving on the Great Barrier Reef… I was really out there, floating in it, swimming in it. I felt like a real spaceman… My whole life I’d thought of Earth as this place where we’re in control of our lives. I’d wake up, go to the grocery store, take my kid to a baseball game. It was this safe, stable cocoon. Now it wasn’t that anymore. In space I could see the Earth in relation to the stars and the sun and the moon. The Earth is a planet. It’s a spaceship. We’re zipping around the universe, hurtling through the chaos of space with asteroids and black holes and everything else, and we think we’re safe but, boy, we are right out there in the middle of it.” – Mike Massimino, in his 2017 book ‘Spaceman’

An astronaut, the first person to tweet from space, a recurring character on The Big Bang Theory, and now a New York Times bestselling author, Mike Massimino grew up a working class kid whose seemingly unreachable dream of becoming an astronaut and flying in space was realized in an unlikely journey that was driven by determination and commitment, and realized with hard work and humor. After two missions to the Hubble Telescope and four space walks to make critical repairs to the telescope, Mike is now the senior adviser for space programs at the Intrepid Sea, Air & Space Museum, a Columbia University professor, an author, a television host, a frequent guest on morning shows, news programs, talk shows, and late night television, and an in-demand speaker for audiences seeking a unique perspective on teamwork, innovation, and leadership from a down to earth spaceman.

In this exclusive interview, I caught up with Mike Massimino to learn more about his experiences as an astronaut.

Q:  How did seeing the earth from space change your understanding of our planet?

[Mike Massimino]:  Seeing the earth from space was just breathtaking – I cannot imagine anywhere being more beautiful, we’re living on an absolute paradise.  Seeing our planet from that vantage point also changed my perspective on the concept of home.  I used to think of myself as a New Yorker, as an America, but now? I’m a citizen of earth first and still all those things.  Now, when I think of home, I think of the earth.

[Mike Massimino]:  Conducting a spacewalk is an interesting combination of feelings, emotions and thoughts.  For our flights on Hubble, we were given the responsibility of trying to service a telescope – and that was stressful – we didn’t have much time to do anything else – our schedule was packed, and we were responsible for a multi-billion dollar telescope – you don’t want to screw it up! You’re there to do a job, and to do it well.

Being at that altitude though – 100 miles higher than the space station, enables you to see even more of the planet’s curvature – it’s a different viewpoint, a different experience and perspective – you truly felt like you were interacting with the environment, you felt like a real spaceman – it was extraordinary.

Q:  What stuck with you, observing the earth from space?

[Mike Massimino]:  The beauty of our planet is just amazing; it’s a fragile paradise.

I remember certain things were particularly stunning; thunderstorms at night from above, shooting stars coming through our atmosphere, city lights, the stars….

When I first got into space, I spent most of my window time during the day when you could see the earth lit-up – but at night, it becomes even more magical; and you can look up and see the stars.

Q:  How did your body adapt to spaceflight?

[Mike Massimino]:  Before travelling to space, I was told to take it slow and easy; you’re moving around in zero gravity – it’s very different to anything you’ve experienced before – even just keeping track of your things, and making sure they don’t float around and knock into people!

I didn’t feel great at all on my first day in space; when you’re floating around, your vestibular system can’t do its job – it doesn’t know which way is up, down, left or right – so you can feel pretty sick; we’re not really designed to be in zero gravity!  One of the amazing things is how adaptable our brains our – and by day 2, I was feeling really good.

NASA is pretty good at understanding how to keep you healthy in space; and so you go through sleep-shifts to help you stay rested, and to make sure you don’t get a drop in performance from being tired.

I’ve been asked about the stress of missions before, and the fact is – you’re ‘in it together’ – you’re working with your team, executing the mission you’ve been trained to do – and NASA have already trained you to deal with emergencies, stressful situations, and given you the tools to deal with problems.  You also have the support of an incredible crew on the ground!

Q:  Are you excited about the future of human spaceflight?

[Mike Massimino]: This is a really exciting time for human space exploration, we have a lot to be hopeful about – and we have a whole bunch of private companies who have very credible strategies and vehicles. I teach now, I am an Engineering Professor at Columbia University and a lot of my students want to go into the space business at these private companies; they’re exciting places to work!

Like in so many other industries, the government has played a key role in kickstarting things – but to realise the full potential of this industry (space) we’ll need private industry to get involved seriously; and we’re just at the beginning of that journey.