Money Under the Corporate Mattress 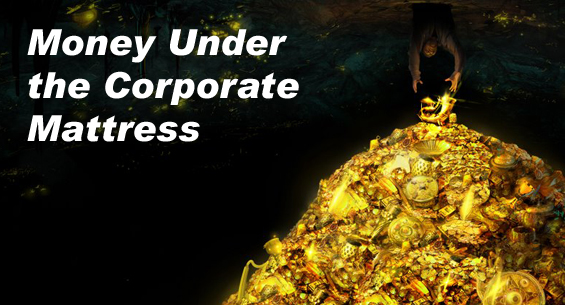 It’s Time to Get Business Spending

In March 2012, The Economist reported that UK corporate surpluses reached more than £700 billion last year, amounting to almost 6% of GDP. The United States told a similar story with the 1,100 non-financial corporations rated by Moody’s showing cash balances of over £1.24 trillion (almost 10% of US GDP)… and in Europe, a group of 30 larger cap non-financial corporations (as at June 2011) were sat on over $872 billion (around 7.2% of European Union GDP).

There are a constellation of reasons why firms are hoarding their cash, but a few key ones are:

Instead of looking at hoarded cash as being a ‘rainy day fund‘ we need to view these balances as stores of economic growth.  This cash represents potential investments, new jobs, new innovations and the potential for significant wealth creation and diffusion.  So how can we get firms spending again?

The developed world economies have a tremendous amount of positive attributes.  We have an extremely skilled labour force, fantastic infrastructure (physical, economic and political) and a very mature capital market.

The world of business is scared without realising that it, itself, is the cure.

Up Next: A Conversation with Siddharth Roy Kapur