Close Search ×
Order the Book Subscribe Free
My Experiences of Being Brown: The Realities of Race and Racism in the U.K.

My Experiences of Being Brown: The Realities of Race and Racism in the U.K. 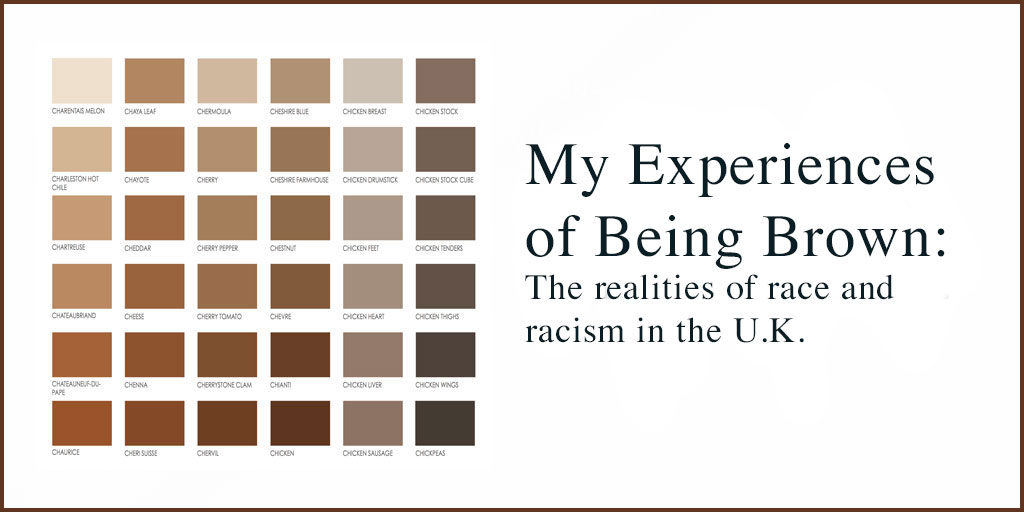 I was only a child when my Mum and Dad took me to ride the ‘space tower‘ at Blackpool Pleasure Beach.  This 48-metre-high rotating observation deck gave a panoramic view of all the attractions at the theme park, and seemed to be a great way to start the visit.

I remember being hugely excited, in the giddy way you do as a child… but this excitement quickly evaporated as the father of another family, on the ride at the same time as us, proceeded to launch into a tirade of statements including (but not limited to), “why don’t you f-ck off back to your own country you Pakis…”

This was my earliest experience of racism, although I didn’t know what it was at the time.  For my parents (who came here in the 1960s) racism was an ever-present part of their early lives in the UK.

To give you just a couple of examples, when my father first came to Manchester, he lived in a one-room bedsit (which cost him £5 a week).  He was looking around for a better place to live (as we all do) and found a nice flat in the popular area of ‘Didsbury’.  He rang the landlord immediately to go and look around, and when he got there, as soon as she opened the door, she paused, took a breath, and said, “..sorry, it’s already gone…” This was not an isolated incident, and when a pattern forms, and all other factors are taken away- the result is simple, it’s race.  For my Dad, hearing people shouting, “Paki! Go Home!” was something regular, not a rarity.  I asked my Dad how he got past this, “I assumed this was just a fact of life in the UK, but because I saw the warmth of some people’s welcome in the business community in particular, I overlooked it…”

For many communities who came to the country at this time, you saw the response was fight or flight.  Fight (integration) or flight (building insular communities).  The former clearly being the more successful option, but a phenomenon that did require both sides to be open to the idea…

Growing up for me, in the 1980s, racism was a part of life.  From being called ‘curry pot,’ and ‘paki,’ at school- to the (fortunately) rarer incidents of on-street racism- I took it for granted that there were a lot of people who simply didn’t like me because I was brown.  Whilst I wasn’t pleased about this, it felt like a social-norm… part of how society worked at the time.

Thankfully, as we moved into the 90s, and 00s, racism became a memory rather than a reality.  Some of this was due to my migration into the nice-leftie-middle-class-bubble my career allowed me to, but a lot was genuinely due to society deciding that racism was not part of our values.

I felt blissfully unaware of my skin culture unless it was specifically pointed out such as one occasion early in my business-life where a journalist asked me, “so Vikas, how does it feel to be an Asian entrepreneur?” a question to which my answer was simple… “I guess like any other entrepreneur, but Brown?” – this may seem inconsequential, but sometimes, the ‘them and us’ in society only becomes apparent when pointed out.

The past few years has shown me however, that racism never left us.  It was pushed deep into the shadows, to fester unchecked into a powerful multi-headed beast which seems to have been unleashed back into modern society.

For the first time in over 20 years, I feel brown…  I find myself being extra careful in terms of how I dress, where I go, how I speak, what I carry and how I behave; not to conform to any new social norms- but rather, so that people don’t mistake me for a terrorist, or make assumptions about my intentions.  I am not the only brown person I know who has a ‘pre-flight shave’ at airports, nor the only one I know who is acutely aware of themselves on public transport.

If this wasn’t bad enough, the underlying social and moral foundation value that racism is not acceptable seems to have eroded away.  Trolls (digital and physical) feel emboldened to shout hate without consequence, they feel they have a movement.

The polarising EU referendum brought much of this to a head.   Let me be clear: I do not, by any stretch, feel that people that voted to leave the EU were racist- but it’s clear that UKIP, EDL,  and their peers realised the power of the race card, and played it to their advantage.  In the process, normalising hate-speech in the public by legitimising it.  The shadow of this activity was cast deep into culture.  Post-referendum, I received some of the most vile abuse I’ve ever received on social-media from complete strangers.   Outing this nastiness was met with a lot of shock and sympathy, but also a significant amount of dismissiveness from those who say, “racism hasn’t increased, it’s just reported more…” which- frankly- is insulting, and untrue. 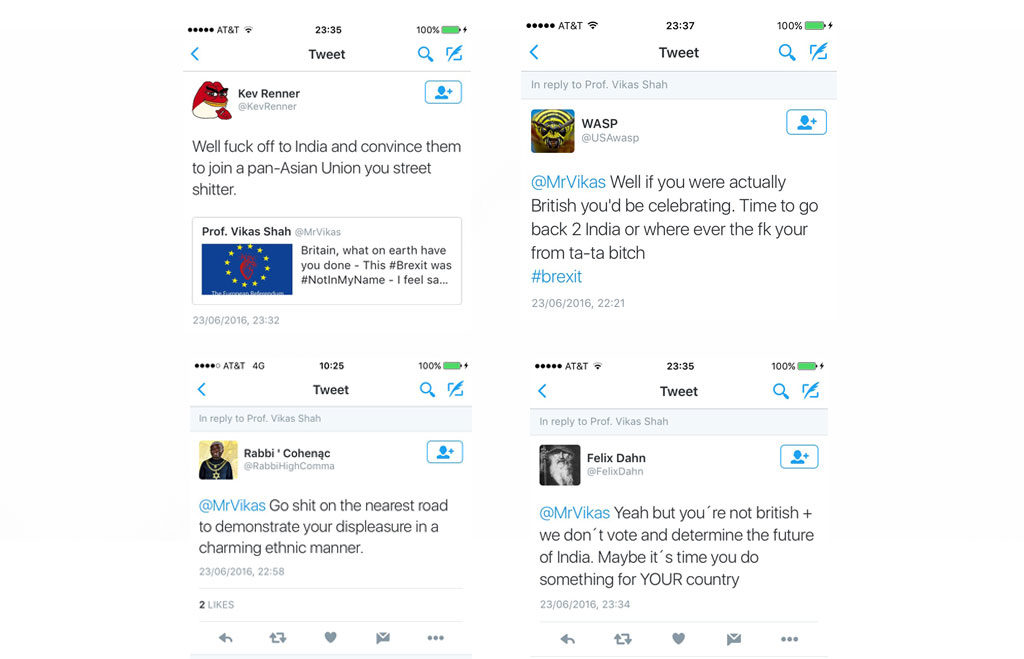 Above: A few examples of the racist tweets I received post-referendum

This digital-abuse was magnified by real-world incidents including being told, “we’ve won, f—k off…” whilst sat in my car at a traffic light… and whilst on a walk with my wife being taunted with shouts of, “do you have a passport?” and believe me… this is the tip of the iceberg.

When I see the abuse given to people in the media based solely on their country of origin or their faith, I’m often brought to tears because I know how it feels, and I’m one of the lucky ones who has been able to create enough of a bubble around them so as to shield myself from the teeth of the beast.

Race, which for a long time has been off the table as far as politics are concerned has been firmly placed back on- and is therefore being used as a tool to lever political outcomes which rarely- if ever- benefit society in the long run.

I’m extraordinarily proud of the tolerance, multiculturalism and diversity of the United Kingdom – it’s been one of our greatest strengths, and has made this country such a beautiful place.  I remain clear in my view that the vast majority of people believe in tolerance, understanding and equality, but this keystone of values has very real cracks, being magnified by a populist movement, which could cause the entire bridge to collapse.

Racism, like sexism and any other form of discrimination, is an utterly futile exercise… nobody benefits.  Societies are better for diversity in all forms, and time and time again we’ve seen that the more homogenous people become, the less they are able to flourish.

Fundamentally too, racism goes against the very essence of who we are.  All modern humans share a common ancestor.  We all emerged from Africa, 200,000 years ago, as our species moved across the Earth, adapting to the differing climates and conditions of our planet.  We are one big, beautiful, dysfunctional and incredible family, tearing itself apart over something as inconsequential as our hue.

Race is not a contest,
Like “a race,”
which has a start, an end, a winner.

Race is a meandering journey,
A story told around the primal fire,
In the first forest of many tribes.

A race has a best, a worst,
Race has only one.
All of us.

Up Next: The Mania of Boom & Bust