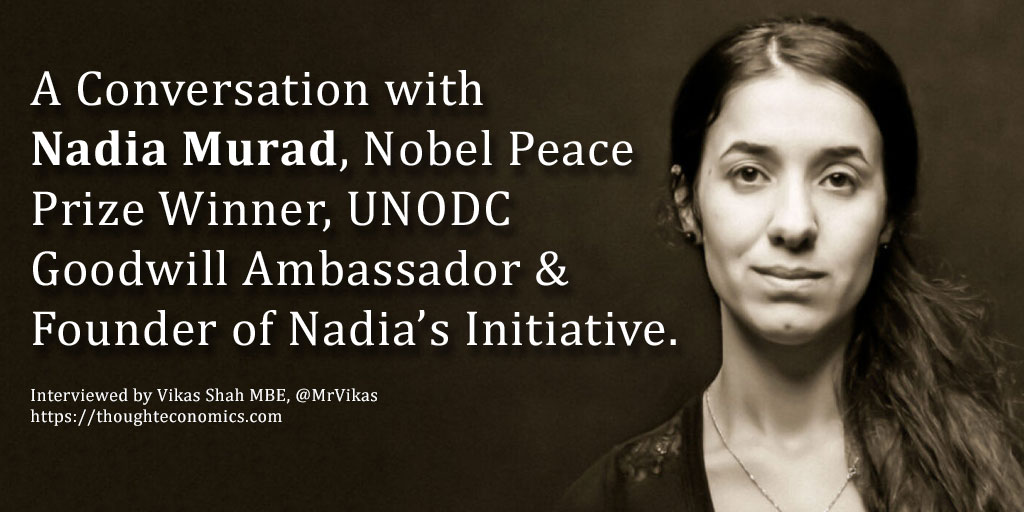 Human rights activist and recipient of the 2018 Nobel Peace Prize, Nadia Murad is a leading advocate for survivors of genocide and sexual violence. Her New York Times bestselling memoir, The Last Girl: My Story of Captivity, and My Fight Against the Islamic State, is a harrowing account of the genocide against the Yazidi people of Iraq and Nadia’s imprisonment by the so-called Islamic State (ISIS).

Nadia grew up in a small farming village in the Sinjar region of Northern Iraq. In 2014, ISIS attacked her village and killed thousands of Yazidis, including her beloved mother and several of her brothers. Nadia was taken to Mosul and forced, along with thousands of other Yazidi girls, into sexual slavery. After escaping captivity, Nadia relocated to Germany as a refugee and began raising awareness of the ongoing plight of the Yazidi community and the need to end the use of sexual violence as a weapon of war. Nadia is the Founder and President of Nadia’s Initiative, a non-profit dedicated to rebuilding communities in crisis and advocating for survivors of sexual violence. Nadia’s Initiative’s current work is focused on the sustainable re-development of the Yazidi homeland in Sinjar, Iraq, and pursuing holistic justice for survivors of ISIS atrocities.

Prior to founding Nadia’s Initiative, in 2016, Nadia became the first United Nations Goodwill Ambassador for the Dignity of Survivors of Human Trafficking. That year, she was also awarded the Council of Europe Václav Havel Award for Human Rights and Sakharov Prize for Freedom of Thought. In 2018, she won the Nobel Peace Prize with Dr. Denis Mukwege. Together, they founded the Global Fund for Survivors of Conflict-Related Sexual Violence. In 2019, Nadia was appointed as a UN Sustainable Development Goals (SDG) Advocate. In her capacity as a member of France’s Gender Advisory Council, Nadia has also advocated G7 member states to adopt legislation that protects and promotes women’s rights. Nadia worked with the German Mission to the United Nations to pass UN Security Council Resolution 2467, which expands the UN’s commitments to end sexual violence in conflict. Nadia was also a driving force behind the drafting and passing of UN Security Council Resolution 2379, which established the United Nations Investigative Team to Promote Accountability for Crimes Committed by Da’esh/ISIL (UNITAD). Since 2015, Nadia has been working with human rights lawyer Amal Clooney to bring ISIS before the International Criminal Court on charges of genocide and crimes against humanity.

In this interview, I speak to human rights activist and recipient of the 2018 Nobel Peace Prize, Nadia Murad, about how communities are destroyed in conflict, how sexual violence becomes a weapon of war, and importantly – how we can build peace, rebuild communities, and give hope for a better future.

Q: Why (and how) do ISIS destroy communities?

[Nadia Murad] Beyond the atrocities of mass murder and rape, ISIS also set out to systematically destroy the Yazidi community by ensuring that we did not have the resources to survive in our homeland. They poisoned wells, burned farms, took out electrical grids, and destroyed schools, homes, temples, and hospitals. Even if they could not kill every last Yazidi, they knew that reaping mass destruction on infrastructure and support systems would make it extraordinarily difficult for us to return to our lives, let alone pass on our culture to the next generation.

Q: Why (and how) do ISIS deprive women of their freedom, agency and life?

[Nadia Murad] A big part of destroying the community was sexual violence. Sexual violence is not just the spoils of war. ISIS wrote manifestos about how to traffic and enslave women. Physical and psychological torture for women were a critical part of their campaign, but so too was fracturing the entire community, which happens when women are violated in this way.

Q: What is the reality of SCRSC (systematic & conflict-related sexual violence)?

[Nadia Murad] ISIS committed sexual violence on a mass scale, but you are correct – they did not reinvent the wheel. Rape is one of the oldest weapons of war and it remains so to this day. There are reports of sexual violence in conflicts in Ukraine, Venezuela, the Democratic Republic of the Congo, and so many other places. For so long, it has been viewed as an “unfortunate” side effect of war. But really, it is a tactic. For too long, and still too often, it is not taken seriously because women are undervalued. When our societies are rampant with gender discrimination in times of peace, that attitude carries over to war and is reified through violence. But the truth is that stable societies are built on the backs of women. Attacking women has a crippling impact on communities.

Q: How do you start to rebuild a community?

[Nadia Murad] First of all, rebuilding a community takes a multi-stakeholder collaboration. The community cannot recover on its own. In terms of Sinjar, the Iraqi government and the international community both have a responsibility to support the Yazidi people after failing to protect against ISIS’ atrocities.

Nadia’s Initiative is working to bridge this gap between the Yazidi community and world leaders to help direct resources toward local rehabilitation efforts. Our goal is to sustainably redevelop the community. A lot of aid goes to displacement camps, which are necessary in the immediate aftermath of a crisis but are short-term and frankly undignified band-aids. The community feels hopeless in that environment where every day is the same and there are no opportunities to rebuild their lives or regain any normalcy.

Nadia’s Initiative is working to help Yazidis return home to Sinjar, and to provide them the support necessary to reclaim their agency and work toward better lives for themselves and the next generation. This means that our work includes restoring everything from infrastructure to education, healthcare, livelihoods, and culture.

Q: What is the importance of women’s empowerment in development?

[Nadia Murad] Women are made vulnerable to sexual violence because of marginalization and discrimination in every aspect of society. But women also are key to any stabilization effort and to the advancement of our communities. Empowering women to be decision-makers in their families and communities makes everyone safer, more successful, healthier, and more educated.

We also know that women are not only affected by female-targeted programs, but they are also affected by access to healthcare, education, livelihoods, and resources. At Nadia’s Initiative, we try to approach every project as a “women’s project” and make sure that women and especially survivors of sexual violence are centered in everything we do.

Q: What is the importance of education in development?

[Nadia Murad] Education exponentially multiplies advancements in every other sector. And critically, it empowers communities with the skills to shape their own futures, build their own economies, and advocate for their own rights.

Q: What is the importance of healthcare in development?

[Nadia Murad] The COVID-19 pandemic has shown us clearer than ever before that the strength of our societies is absolutely dependent on community health and health education. In communities affected by conflict and violence, there is an added layer of care that is needed to heal from violence and lead healthy, productive lives. I am so proud that Nadia’s Initiative’s flagship project is the establishment of a brand-new, state-of-the-art hospital in Sinjar.

Access to psycho-social support is critical to the recovery of communities that have been traumatized by genocide and sexual violence. Mental health is so often stigmatized, and it is so important for people to know that they do not have to work through the trauma alone.

Yes, therapy is a powerful tool, but mental health is impacted by poverty, unsafe environments, and lack of privacy all contribute to stress and a sense of hopelessness. Creating dignified conditions for the community to rebuild all aspects of their lives can greatly affect healing.

Q: What is the importance of entrepreneurship & enterprise in development?

[Nadia Murad] Work is called a livelihood for a reason. It is so central to our lives. My community does not want to live off aid in displacement camps. It wants to busy itself earning its own keep and building something for their families and community. Livelihoods are crucial as the off-ramp from aid to self-sustained development.

Q: How do you rebuild a culture?

[Nadia Murad] A culture is nothing without people. Yazidi survivors are keeping our culture alive. We can support the culture by helping people thrive. Nadia’s Initiative also works to enable the community to practice and preserve their heritage by building commemorative museums and rebuilding temples and sacred spaces of worship.

Q: How do you maintain hope in humanity?

Honestly, I do not always feel hopeful. I am more worried for the future of my community now, eight years after the genocide began, than I was when I first escaped ISIS. Recovery has been too slow because it is hard to find and maintain support from the international community when there are so many crises in the world. But I also find hope and solidarity in those crises. Women in places like Afghanistan and Ukraine are making powerful stands for their rights and freedoms. It is inspiring, and I learn so much from their work.

When I feel discouraged, I also look to my sisters and friends in Sinjar who are getting back to their lives despite such horrendous hardship. They carry on for us and I will for them.

Q: What does happiness mean to you?

[Nadia Murad] Happiness is family. I loved growing up in Sinjar surrounded by my mother and siblings. Those memories are my happy place.

[Nadia Murad] I hope my legacy will be that I helped my community to revitalize our homeland and that the international community will include survivors in the work to prevent and respond to sexual violence in conflict.

Up Next: Global Health