Close Search ×
America & The Gun: A Conversation with Nicholas Kristof

America & The Gun: A Conversation with Nicholas Kristof 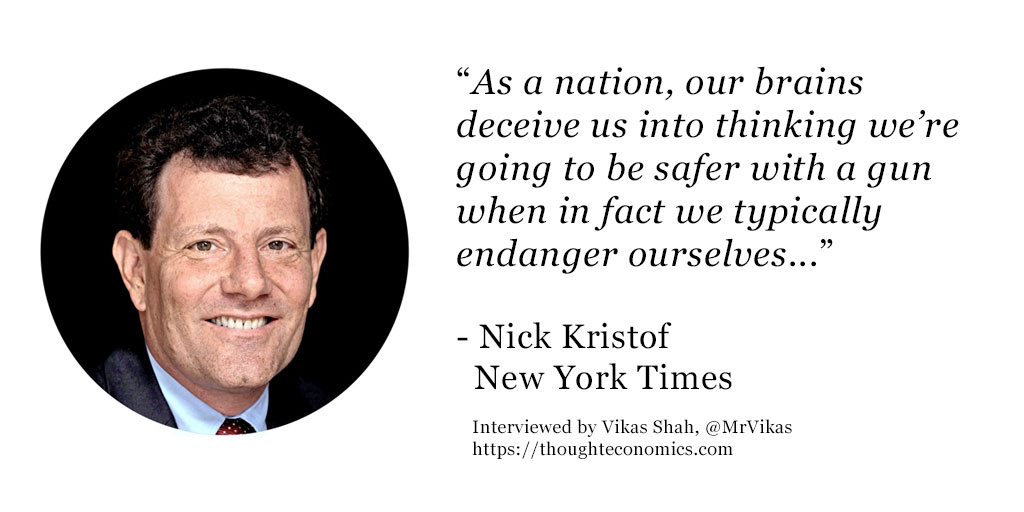 “The guns and the bombs, the rockets and the warships, are all symbols of human failure.”
–  Lyndon B. Johnson

The United States of America, home to 323 million people, and 300 million guns.  To put that another way, with less than 5% of the world’s population, the United States is home to roughly 50% of the entire world’s civilian-owned guns.

The consequence of this concentration of firearms is obvious, and distressing.  More than 30,000 Americans are killed with guns each year, and over 100,000 are shot.  That’s one American dying from gun violence every 15 minutes of every day.  Notwithstanding the huge emotional and social toll, the healthcare costs of gun-violence alone are estimated to be as high as $45bn.

When considering nations with a high proportion of civilian gun ownership, the United States is not alone; but against practically every metric of gun violence- from mass shootings to suicides, from accidental shootings to violent crime, from domestic violence to gangs… the United States stands out from the crowd, and not in a way the nation can be proud of.

Nicholas Kristof is a Pulitzer Prize winning New York Times journalist who has covered US gun violence extensively; and I caught up with him to learn more about the relationship between the United States, and its guns.

Q: Why is the US so obsessed with guns?

[Nick Kristof] America’s relationship with the gun partly arises through our history, and partly through the way culture has developed.

The US was traditionally a rural country with wide open spaces, and a lot of people kept rifles for protection.  At the time, the whole country was engaged in a revolution against the government, and that- together with other civil conflicts, bred a sense that guns are useful as a measure of protection.

American history has bred a mythology of guns as being protection from an oppressive state.

We’re not alone however; Australia and Canada’s gun ownership stems from a similar history, Switzerland has guns in almost every household- yet they haven’t turned guns into this symbol of manhood in the way the US has.

The recent politicisation of guns, which I think the NRA is partly responsible for, has been incredibly debilitating for the country.

Q: How are guns being politicised?

[Nick Kristof] The NRA is, or has become, a hugely important factor in the political paralysis around guns-  but of course, the NRA reflects (as well as shapes) US culture.

There is a segment of the US population cares deeply about the NRA and votes on gun issues –  but for the rest of the population, guns are maybe one reason why people go vote a certain way, but not a substantial one.

Politically, in the South especially, the three key political issues were guns, god and gays.  The 3 G’s. That’s no longer true- actually on any of those three- and that there is beginning to be some willingness to move towards sensible regulation of guns.

Q:  What are your views on the portrayal of gun-crime in the media?

[Nick Kristof] When it comes to guns, the trend of covering of mass-shootings leads the public to think the big problem is mass shootings.  However, the big problems are suicides, domestic violence, known people, and gangs shooting at each other.

I am also concerned that there are some people who desperately want to find meaning in their lives… to do something… and who feel kind-of like failures.  These individuals realise that if they go shoot up a school, they will be in the news. I’ve increasingly come to think that we, in the media, should not name the shooters in mass shootings.  It’s fine to discuss their backgrounds and seek lessons, but that perhaps we should be wary of putting their names out there and giving them that notoriety that in some cases they seem to seek.

Guns kill about 34,000 people in the US every year, and about two-thirds of those are suicides.  The basic problem is that if you attempt to commit suicide with a gun, you typically succeed.

It’s also true that there is a more violent culture generally in the US.  For example, Switzerland has guns in most homes, and people- for the most part- don’t shoot each other.  The US in general, has broader problems with crime, with social dysfunction, narcotics often, and all these work together with guns to create this epidemic.

Q:  How can we tackle the cultural significance of guns?

[Nick Kristof] The number of guns in the US is steadily rising but the proportion of households who have guns is generally going down. Essentially what is happening is fewer households are each having more guns.  So, the cultural significance is changing.

However, our efforts to target guns themselves, haven’t been very successful.   What has tended to work better is to limit access to guns by problematic people if you will.  One of the most successful policies we have on guns in the US involves automatic weapons.  To be clear, Americans can still own a fully automatic weapon, they’re not outright banned, but there is a very intensive vetting process – so, as a result, very few Americans have an automatic weapon and those automatic weapons that are legally owned are almost never used in crime.

The simple math from a vetting process; In general a 40 year old woman who carries a weapon is a pretty safe bet.  A 19-year-old man with a felony conviction and a history of alcohol abuse is a pretty bad bet.

We have to more clearly vet who gets access to guns- and perhaps even ammunition.

Guns interact with various other American peculiarities and really also challenge the image of the US abroad.  We clearly have a problem with gun violence, we also have problems with discriminatory policing, with antagonism towards immigration and refugees- and all these issues are working together to cause people to look at the US with raised eyebrows.

Q:  Should we be treating guns as a public health problem?

[Nick Kristof] There are two key advantages of thinking of guns as a public health issue.

Secondly it moves the debate to be about evidence; where we can empirically show what works, at what cost.

The public health approach has been successful to pursue with regards to cigarettes and tobacco, pollution, alcohol and so many areas of our lives; it seems a lost opportunity to not apply it to guns.

The mental health angle is critical too; One of the misconceptions is that for people who are feeling suicidal- it doesn’t matter whether they have a gun in the house or not, they will go ahead and commit suicide. In fact, there is very strong evidence that that is not the case.  The best example is from the UK where- in the 1950s- they changed the gas in ovens and made it in a little bit harder to kill oneself.  Of course, Brits could still kill themselves in a thousand other ways- but it isn’t now as easy as putting your head in the oven and turning it on.  And so, changing the gas in ovens meant that suicide rates dropped.  In the US we have the equivalent in many, many homes, a really easy, pretty certain way of killing oneself.

Q: Is the US gun situation improving?

[Nick Kristof] I do think the situation is getting better, indeed gun homicides have come down over time even as the number of guns has gone up- and I do think that attitudes are changing to some degree.

The percentage of households that have guns is declining, and that’s important because it reduces the political power of the gun lobby.  As a result, there is a decent prospect that some states in particular will move ahead on this issue- and at some point, congress.

The big problem is this.  Even if we end up with better regulations, we’ll still have 300 million guns washing around the US, and that’s going to be a huge problem for decades, because guns last a long time.  Maybe we can address that with gun buybacks, and maybe we can address that with limits on access to ammunition, but I think that guns are going to be long term problems because we’ve allowed them to spread around the country.

Q: What would be your message to gun owners?

[Nick Kristof] When people want to buy a gun, it tends to be because they are nervous about security and they want to be safer.  It is indeed true, that on occasion homeowners have used guns to deter an intruder or shoot an intruder… but it’s also true that this is an exceptionally unlikely occurrence.  There is pretty good evidence- on balance- that a gun in a household puts one at greater danger.

A gun in a household certainly puts one in greater danger of suicide.  It puts other loved ones who are in the household at greater risk for suicide and accidents too.

Even in the case of that nightmare scenario where we envision an armed intruder who comes into our home, if they see somebody with a gun then they’re more likely to shoot.

Rather than getting a gun, one is probably going to be safer by having one’s cell phone on hand to get ready to call 911 or putting an alarm system perhaps, or getting a dog.

As a nation, our brains deceive us into thinking we’re going to be safer with a gun when in fact we typically endanger ourselves.

Nicholas Kristof has been a columnist for The New York Times since 2001. He grew up on a farm in Oregon, graduated from Harvard, studied law at Oxford University as a Rhodes Scholar, and then studied Arabic in Cairo. He was a longtime foreign correspondent for The New York Times and speaks Chinese, Japanese and other languages.

Mr. Kristof has won two Pulitzer Prizes for his coverage of Tiananmen Square and the genocide in Darfur, along with many humanitarian awards such as the Anne Frank Award and the Dayton Literary Peace Prize.

With his wife, Sheryl WuDunn, he has written several books, most recently “A Path Appears” (September 2014) about how to make a difference. Their last book, “Half the Sky,” was a No. 1 best seller.

Mr. Kristof, who has lived on four continents and traveled to more than 150 countries, was The New York Times’s first blogger and has millions of followers across social media platforms.

Mr. Kristof and Ms. WuDunn are the parents of Gregory, Geoffrey and Caroline. Mr. Kristof enjoys running, backpacking and having his Chinese corrected by his children. Read his blog, On the Ground. Follow him on Google+, Instagram, Twitter and Facebook. His column appears every Sunday and Thursday.

A Conversation with Prof. Steven Pinker

Up Next: We Need to Re-Think Economics