A Conversation with Nicola Benedetti CBE on Music, Philanthropy & Performance 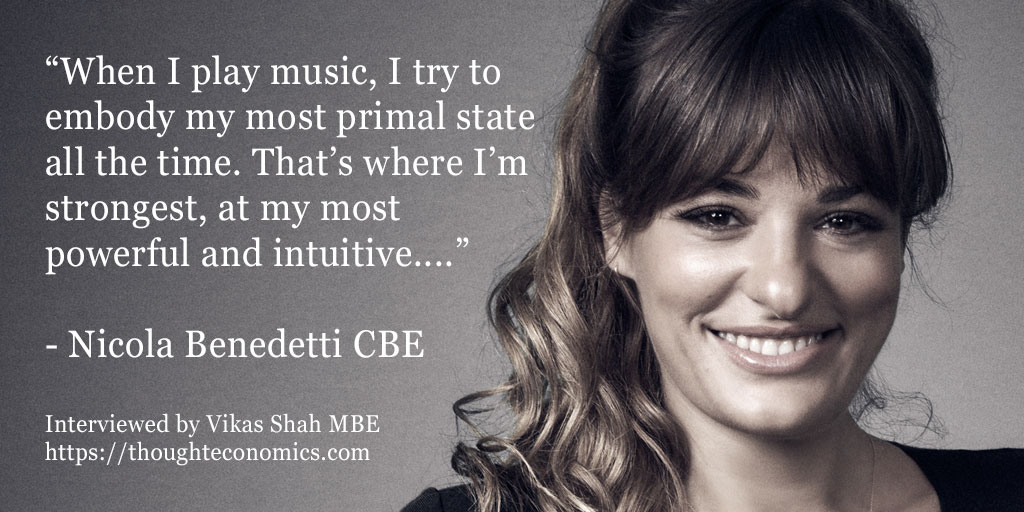 Nicola Benedetti is one of the most sought-after violinists of her generation. Her ability to captivate audiences and her wide appeal as an advocate for classical music has made her one of the most influential artists of today.

Nicola is a dedicated, passionate ambassador and leader in music education reaching young people and connecting with teachers, supporting their practice, highlighting their essential role in society and encouraging collaboration and mutual learning. This commitment was underlined in July 2018, when Nicola took over as President of the European String Teachers Association and by establishing a charitable organisation: The Benedetti Foundation.

Winner of the GRAMMY Award for Best Classical Instrumental Solo in 2020, as well as Best Female Artist at both 2012 and 2013 Classical BRIT Awards, Nicola records exclusively for Decca (Universal Music). Her most recent recording features premiere recordings of works written especially for her by jazz musician Wynton Marsalis: Violin Concerto in D and Fiddle Dance Suite for Solo Violin, for which she won her 2020 GRAMMY. Nicola was appointed a CBE in 2019, awarded the Queen’s Medal for Music (2017), and an MBE in 2013. In addition, Nicola holds the positions of Vice President (National Children’s Orchestras), Big Sister (Sistema Scotland), Patron (National Youth Orchestras of Scotland’s Junior Orchestra, Music in Secondary Schools Trust and Junior Conservatoire at the Royal Conservatoire of Scotland).

In this exclusive interview, I spoke to Nicola Bendetti CBE on her life in classic music, the beauty of the violin, and why music education matters.

Q: How did music become so pivotal in your life?

[Nicola Benedetti]: I never had a conscious thought that music would be my everything, but I never had anything that pulled me elsewhere, and anything that threatened that sacred part of my life felt like an assault on my being and my sense of worth. As I grew older, I started becoming more aware of how integrated my feelings about music were. The level of playing I was achieving… my art… everything about the violin… my emotions… it was all becoming inextricable from who I was. This can be wonderful, uplifting and symbiotic- but can also be dangerous… there’s always a danger when your entire sense of identity is entangled so closely with this one thing that you’re trying to achieve and improve all the time.

Q: Why did you choose the violin?

[Nicola Benedetti]: I didn’t choose the violin- I copied my sister who was hellbent on playing the violin. In the process of copying her, I ended up with a fixation… an obsession… and drove my mum crazy every day asking if I could play.

I’m left-handed, so those early days were a little traumatic but quite soon I started falling in love with the instrument. When I was really young, I also started falling in love with melody- I had this very real, visceral, emotional reaction to melody- I’d be in tears listening to certain pieces of music when I was only 5 years old. Later, I became excited by the virtuosity of the instrument.

The violin has this unique diversity across time. It has this worldwide cultural relevance because of its versatility, and the fact that it can mimic a lot of other sound. It’s delicate, yet its continually put at the forefront in a classical music setting. It’s often the virtuoso instrument, the one that plays the solo. When you actually stand in a room and compare the volume of a violin to a trumpet at full playing volume, the violin can’t even be heard. It’s an instrument that embraces opposites and contradictions but manages to produce a combination of things that is right for people.

Q: How do you connect with music as you perform?

[Nicola Benedetti]: When I play, I try to embody the most primal state I can- that’s when you’re strongest, at your most powerful, intuitive and convincing. Too much information and analysis can actually get in the way of how you would naturally understand and feel your way through the structure of a long, complex piece of music. You need to feel how to bend sound, how to pull back on something, or bring your playing sound to the forefront.

The process of performance is so interesting. It’s about bringing years of cumulative information, listening nuance, an understanding of taste, and also the culture of the time and combining that with passion and expression. As classical musicians we’re in such a unique position- we’re often repeating performances of pieces of music that have already been played thousands of times but also trying to express music from ourselves in a way that pulls away from learnt tradition and understanding and becomes subjective and unique. It’s an endlessly fascinating tug of war.

Q:  What does success mean to you when it comes to playing and learning music?

[Nicola Benedetti]: Occasionally I listen back to something and thing, ‘oh! I actually quite liked that!’ but usually I’m very self-critical. The notion of developing as a musician and developing that physicality and musical self is something I really connect to.

That’s not the case for everyone, it’s an individual journey. Some people can go in the direction of detailed direction and analysis- melding and sculpting as many details as possible of a given concerto; but when you think that most concertos are no shorter than 25 minutes, the amount of deepening and improvement and developmental activity you could engage in is endless. I know a lot of people who develop and improve by squeezing more and more out of a repertoire, but the journey of development for me is somewhat opposite to that. I’m trying to let go more and more, to be less controlled and more open… that’s where I feel the most impactful storytelling comes from.

I see thousands of students that are so caught up with the overwhelming number of things you have to learn and absorb in order to play an instrument as complicated as the violin, and music as complicated as Beethoven. The process can kill their musicianship. The process can drown-out the music so much that you can’t hear it anymore… you can’t feel how your hands or body will find a creative solution to get around a certain point in the piece. You end-up so cut off from your intuitive self that it’s a series of obstacles playing a piece of music rather than something which is an expression.

I argue for the development of a disciplined work in learning an instrument, but a discipline that encourages a sense of physical, mental and emotional freedom. It might sound like I’m arguing for that because I think it’s more artistic or aligned with what it means to be a musician- but I’m also arguing for it because I believe that people improve a lot that way. You have to find your own creative path through solving artistic and musical problems. That’s the only way to unlock the freedom and confidence you need to make fewer mistakes and find your own sound.

Q: What inspired you to set up your foundation?

[Nicola Benedetti]:  Frustration was the component that propelled me to start a foundation, but I’ve been working in education since I was 15. I did my first tour of schools when I was that young; and met so many teachers, amateur musicians and young kids who started playing and wanted to go on and pursue music, or have music play a role in their lives. The frustration I felt was over how music was being approached in schools – whether that be general music education for primary school education, or those studying the violin to be part of an orchestra. I felt this innate frustration that something was wrong with music education and I wanted to help. There’s also a piece of wider advocacy that’s important around making music available, affordable, fun and engaging to all the people who have literally zero music education in their lives.

[Nicola Benedetti]: Advocating for classical music is an area that people can feel extremely passionately about because they may feel that you are trying to claim a hierarchy in music, and that all forms of expression are just that- expression… and a good tune is just that- a good tune. In my work, we’re not talking here about music entertainment but music education, and that’s a very different thing. There is so much music which doesn’t necessarily require a complex education or deep understanding to pick it up- if you know the basic words and chords, you can play. There’s an attentiveness and understanding you need to get into the complexity of classical music. You need to understand how its written, the story of the composers, their philosophy, the message they were trying to communicate. We’ve got this incredible infrastructure around classical music… concert halls, orchestras and libraries that store the music, which is codified beautifully, but that doesn’t mean it has to be a certain way because it’s always been a certain way. Today, we’re seeing huge amounts of debate about how history is taught, how groups and voices are represented- or have not been represented in our picture of history (which is generally a White, Western viewpoint) and those debates need to be had in music too. Reinvention is not about doing away with tradition, but about re-evaluating, understanding more and applying that evolved mindset to tradition.

Q: What does music do for us?

[Nicola Benedetti]: The breadth, amount and diversity of music that exists today is incredible. The lengths to which people have gone to deepen that work has created a picture as colourful as anything we’ve done in the 21st century and is just as valid a structure as anything else we have created politically, socially or physically.

Music represents a humility, and people relate to it in the same way they may relate to religion. They have a sense of faith and belief that what music is, and what it does to them, can never fully be understood yet the truth of what it does to them means they don’t necessarily need to understand. That’s the humility of faith. That’s how I feel about music.

That invisible quality of music gets inside us and attacks thoughts, feelings and things in the brain which we simply do not understand yet. The fact that music infuses into all those parts of who we are so powerfully just fills me with humility, faith and awe.

Up Next: On Critical Theory: A Conversation with Dr. James Lindsay, Co-Founder of New Discourses.