North Korea – What Happens Next? 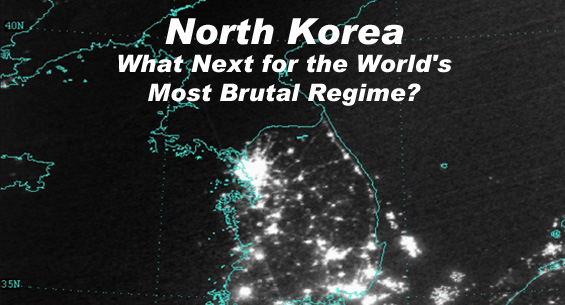 “..It is hard to overestimate how much is at stake for the world after the sudden death of Kim Jong Il, the North Korean despot, on December 17th…” wrote the Economist.  Political leaders (particularly those in the West) looked on as this poverty stricken failed state (armed with nuclear weapons) went largely silent- releasing only token-propaganda.

This is a country who are known to be one of the most brutal and systemic abusers of human rights in the world.  Since 1997, the world has observed that, “…North Korea is indeed on the verge of a major disaster… International aid agencies say they have never seen anything quite like it… it is like watching a famine in slow motion.” (this was a famine that killed up-to 1m people in the country).  Fast-forward to 2011, and reports emerged that, “The UN’s World Food Programme (WFP) is preparing to distribute emergency aid to 3.5m North Koreans suffering from ‘severe malnutrition’“.  It was also around this time that evidence began to emerge of, “…an arbitrary judicial system, an expansive conception of crime, and horrific abuses.  These abuses include extreme deprivation, particularly with respect to food and medical treatment, torture and public executions.”.  This a country  where “…witnesses have described watching entire families being put in glass chambers and gassed… left to an agonising death while scientists take notes. ” and where hundreds of thousands of people exist in prison camps (akin to concentration camps) with (as reported by Amnesty international), “…virtually no rights, treated essentially as slaves, in some of the worst circumstances we’ve documented in the last 50 years…”

It is not unreasonable for to assume, at this juncture, that the presence of nuclear weapons in the hands of this nation’s provocative leadership is a significant contributor to the ‘blind eye’ turned by the rest of the world to these blatant crimes against humanity.

Why Hasn’t There Been a North Korean Spring?

First, a history lesson.  Following Iraq’s invasion of Kuwait in 1990, the United Nations security council imposed a financial and trade embargo on the nation.  The stated rationale for these sanctions was to eliminate weapons of mass destruction, reduce other military capability, eliminate support for terrorism and force Iraq to pay war-reparations and debts.

After close to thirteen years of sanctions (during which between 250-500,000 children may have died) the nation was left with high rates of malnutrition, extremely poor medical care and high incidence of disease (often due to lack of clean water).  Iraq was economically and socially on its knees.  Speaking at the time of the sanctions, Denis J. Halliday (the United Nations humanitarian coordinator for Iraq) wrote ”…We are in the process of destroying an entire society. It is as simple and terrifying as that….”

The population was left economically, physically and psychologically weakened- a state which the United States had hoped would encourage the people to remove Saddam Hussein from power.  However… as many sociologists and experts have noted, a population in this state can (and are) prone to becoming compliant political tools.  This allowed Saddam to gain further strength in many segments of his population, repress others and (ultimately) allowed the United States and allies to more effectively win the hearts and minds of a population who would have (frankly) believed any ideology that offered them a way out…

In North Korea, the regime itself has effectively placed state-imposed sanctions over the entire population to brutally force them into such extreme economic and social poverty that they remain (largely) at the whim of the regime- existing in a state of learned helplessness.

The situation in those countries who experienced the Arab Spring was somewhat different.  While not ‘rich’ nations, these were countries where citizens did have some access to the economic, social and communications tools necessary to organise.  Perhaps even more importantly, these tools allowed citizens to show the rest of the world- from their eyes- what was happening to them.  It was no longer anecdotal evidence from academic reports and NGO’s – this was a real and often eye-wateringly horrific stream of images, video and commentary by the population.  Faced with this… the world’s political leaders had no option but to act- even when faced with dictators of significant military power.

It is essential that the world ceases to turn a blind eye to what’s happening in North Korea.  These are people who have just as much right to live as you and I but for whom that visceral tool of citizenship- a voice- does not exist.

The Avoidance of Hypocrisy

“…The worst sin toward our fellow creatures is not to hate them, but to be indifferent to them; that’s the essence of inhumanity….” – George Bernard Shaw

Up Next: Poverty in the UK – A Conversation with Darren “Loki” McGarvey