A Conversation with Perry Chen, Principal Founder of Kickstarter. 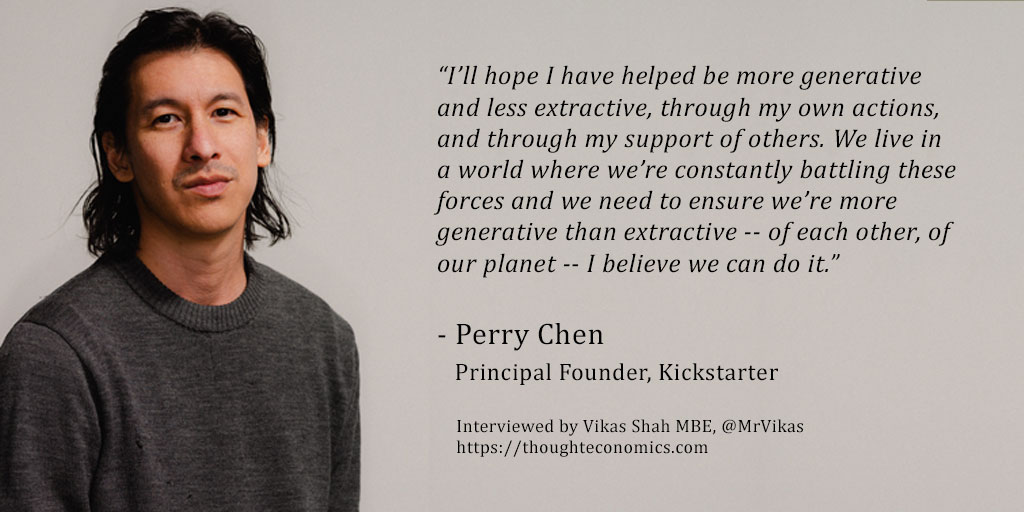 In 2009, Kickstarter was born from a singular mission to help bring creative projects to life.  Since then, 18.4 million people have collectively pledged over $5.23 billion into more than 186,000 projects. The Kickstarter mission extends to the very fabric of how the business is structured. In 2015, they became a Public Benefit Corporation (a for-profit company that prioritizes positive outcomes for society as much as their shareholders). Kickstarter projects have won Grammys and Oscars. London’s V&A Museum curated a show about Kickstarter design projects. Hank Willis Thomas and For Freedoms’  They recently celebrated their tenth birthday, joined the Global Strike for Climate Change and went Climate Neutral—all part of their wish to build a long, healthy future for the creative culture (which they helped cultivate).

Perry Chen is the creator and principal founder of Kickstarter. In this exclusive interview, we talk about the connection between arts & entrepreneurship, and the story of Kickstarter.

Q:  What is the link between arts and entrepreneurship?

[Perry Chen]: What feels similar is the pursuit — by artists and entrepreneurs — of the actualization of an idea borne in their minds; and then pursuing bringing this vision to reality.

You hear artists (and entrepreneurs) consider the humble beginnings of this actualization — notes or sketches written on the backs of a napkin — and then the long road to bringing that idea to life. Especially at the beginning, it takes just the right amount of delusion to dedicate yourself to something ambitious. The reality is you’re more likely to fail than succeed and so you need strong belief to commit your heart and soul to an idea; as well as a bit of over-optimism (delusion) to make the sacrifices they are often called for to bring anything to life. Making a film is hard, bringing many ideas to life that are in your head are hard.

That’s where an artist’s mindset comes in. As entrepreneurs are more likely to both create something and carry it forward, art is more about creating the thing itself — which traditionally is not changing: When a film is done, it’s done.

Q:  What has been the role of technology in empowering arts as a practice?

[Perry Chen]: Go back to Gutenberg’s printing press, that was (perhaps) the start of distributed media and sparked a revolution. The paintbrush was a new technology… technology creates tools that can be combined to create opportunities and new concepts in the arts, or entrepreneurship.

In the past 20 or so years, the rise of the internet has created new dynamics that effect the arts. For example: On one hand, it’s never been easier to be ‘discovered’ as an artist… you can be in a remote village, make a really great song, share it on your phone, and it can go viral…. Before? Maybe you didn’t live in the right place, or have the right connections, and nobody might ever hear it. On the other hand, the sheer volume of talent now visible also means less opportunity for mediocre work. This becomes clear very quickly. That’s what access does: Opens the doors for great stuff that may have been missed, and also raises the bar for everyone in turn.

Q:  What was the origin of Kickstarter?

[Perry Chen]:  Kickstarter came out of a real need I understood firsthand. People need funding for their creative projects. The traditional sources of capital for ideas — investment, charity, rich relatives, grants — are nowhere near sufficient to the number of good ideas in the world. When you think of traditional investment models, maybe 10% of the ideas in the world are best built around generating positive return. Most ideas are built around a creative concept — someone wants to write a play or make a game. Often taking these ideas to traditional investors (if you even get an audience) will distort them- you see this all the time in Hollywood. Someone writes a script and the funders want to change the ending… insert a narrative… change the genre… before you know it, it’s a different story. There had to be a better way. This is where the concept of ‘patronage’ came in. Whether you look at Michelangelo or Mozart, they had patrons; sometimes royalty, sometimes the church, sometimes aristocracy. Now, the internet has democratized this, and you don’t need to be wealthy to be a patron. You can help bring something to life with $10 because you like the project, not because you see it as a financial return.

Q:  What are the characteristics of the most successful projects on Kickstarter?

[Perry Chen]: It’s difficult to define success. Is it the amount of money raised? Is it the impact the project had in the world afterwards? It’s easier to track the former, but ultimately the latter is more important. I strongly believe that art and creative work are essential to a healthy society.

But I know people are interested in how to best fund their project, or why certain projects became such runaway funding successes. One of the common characteristics of projects that do ‘well’ on Kickstarter is that their campaigns are also interesting content themselves.

A video of the creator (or team) talking about their passion for their project, and why it’s important to them. People want to support other people who are doing interesting things with passion. They always have. Kickstarter was just a way to help create a form and reduce friction for these connections to occur.

Q:  Has Kickstarter enabled (or re-enabled) a movement in entrepreneurship?

[Perry Chen]: Insofar as entrepreneurship and artistry are conjoined, you see them linked around the idea of taking risks. That doesn’t necessarily mean the objective is to build a multinational company. Throughout history, entrepreneurship has been present – you may have had a farm, a shop or been a merchant… but industrialisation created these vast global businesses built around industrial technologies. What we’re seeing now is a move back to an understanding that not everyone should need or want to be an entrepreneur in that hyper-competitive sense that we see in startup-culture, but rather that technology has enabled us to try things, to experiment, to have a side-hustle, to create. Kickstarter is definitely part of this larger change of letting more small seeds grow into a myriad of forms — works of art, projects that grow into business, and other experiments of imagination.

Q:  What have you learned about building a scale-up business?

[Perry Chen]: I think you have to keep things as simple as possible and create alignment. The more people, the harder this gets. Our mission at Kickstarter is to help bring creative projects to life. A mission should explain what you will do, but it’s not a guide for why or how- and that component, the why is important. That’s why more context is often important.

As I mentioned, we believe that creative work is essential for a healthy and functioning society, and that’s why we have a mission to help creative projects come to life.

It’s a challenge to continually reinforce the what and why, and to do it successfully you need to clarify without adding ambiguity — adding contradictory “goals”, “values”, “purposes”, etc. They all need to fit together and have a clarity of what is most important. That’s what a mission should be for. Your values are embedded in your mission. You can understand Kickstarter’s values through our mission —  to help bring creative projects to life — and the context for why our mission was formed — the belief that creative work is essential for a healthy and functioning society.

Separately, I believe businesses need to move away from having profit as their primary reason for existing, that’s why we built Kickstarter as a public benefit corporation and encoded our mission into our fiduciary responsibility. Profit primacy can be replaced by mission primacy.

Kickstarter is still a for-profit company, but we do not maximize for profit. Our mission is our primary directive, and any profit should come through the success of that mission, full stop.

If you step-back, you’ll see that most companies are profit maximising by law (and happily so). They all purport have missions, but in reality- those “mission statements” are really strategic and PR statements. Their real mission is to make the most possible money, and if there’s ever have any conflicts, money wins.

Q:  Do you think more companies will begin to use alternative business structures?

[Perry Chen]: The amount of companies using alternative structures remains small, less than 1%, but it’s also higher than it ever was. The younger generations  getting into business now are less interested in creating profit-maximising entities without considering the effects.

There are more alternative forms than ever, and there have been more examples of successful and impactful companies — not only measured by money — that have created models for new entrepreneurs to learn from. This is a key part of change, and sets the groundwork for more innovation, legislation and cultural interest.

There is also a deeper challenge with complicity where people may well have high expectations of the companies they work for but are able to apply self-delusion. We’ve all known someone who works for a company which would be considered harmful to the world but they’re like, ‘no, the mission is this or that…’ just enough narrative delusion so they can pretend what they do is not-extractive; even meaningful… so they can cash the cheque. It’s human! It’s another form of delusion from what I spoke about earlier.

Q: How do leaders manage complexity and uncertainty?

When people, they’re inclined to create simplified narratives around complex things which makes the world appear more predictable then they are- it makes many people feel safe and gives leaders the illusion that they have the answers. In reality, we need to be honest. We need to be open about the fact that things are often unpredictable and ambiguous. As leaders, we have to be OK with saying ‘I don’t know…’ and still making a sound decision with the information you have at the time.

You will have inclinations, you should have a sense of direction, but you can’t fool yourself into making meaningless 5-year plans.

Navigating complexity and uncertainty requires long-term thinking, not long-term planning. Long-term thinking requires accepting, even enjoying, the challenges of unpredictability, builds the flexibility required to navigate it, and rejects simplified narratives that lose the nuance of this reality. Simplicity is good, even critical, but things are only as simple as they are. You need to live and lead from there.

[Perry Chen]: I’ll hope I have helped be more generative and less extractive, through my own actions, and through my support of others.

We live in a world where we’re constantly battling these forces and we need to ensure we’re more generative than extractive — of each other, of our planet — I believe we can do it.

A Conversation with Perry Chen, Principal Founder of Kickstarter.

A Conversation with Joseph S. Nye, Jr. on Power in the Modern World.

A Conversation with Gary Hamel, The World’s Leading Expert on Business Strategy

A Conversation with Max Richter; Composer, Pianist, Producer and Collaborator