Close Search ×
Order the Book Subscribe Free
A Conversation with Peter Diamandis on How Technology is Transforming Every Aspect of our Lives.

A Conversation with Peter Diamandis on How Technology is Transforming Every Aspect of our Lives. 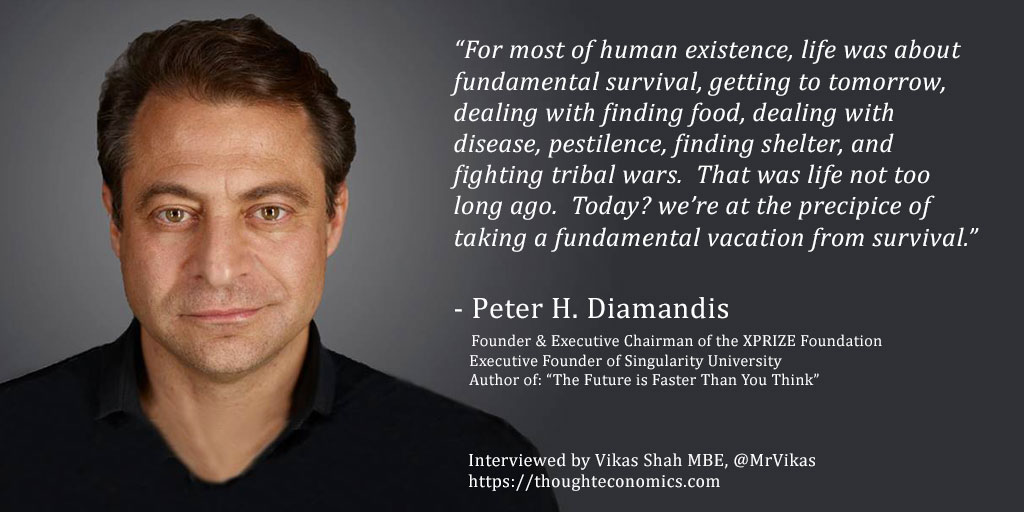 I write this from Manchester (England) – a city which, in the late 18th century, birthed the industrial revolution with automated manufacturing of textiles.  In 1795, England produced 40 million yards of cloth; 55 years later, 2.1 billion yards.   During this period, the population more than trebled, and the wealth created lifted many out of poverty, and created globally important cultural and intellectual assets ranging from universities to colleges, art galleries and gardens.  During this period, in 1830, Manchester unveiled the world’s first steam-passenger railway… transforming global transportation – and in 1948, The Manchester Baby became the world’s first stored-program computer, launching a computer revolution that has transformed and disrupted every aspect of our lives.  By the end of this year (2020), the entire digital universe is expected to reach over 44 zetabytes (meaning we will have created 40 times more bytes of data than there are stars in the observable universe). Not only is the scale of progress increasing, but the pace too.  Many of our most common daily interactions, with things like: Uber, Instagram, Snapchat, and WhatsApp didn’t exist just 15 years ago.  Google is only just 20 years old, and the iPhone? Only a decade.

To understand more about the exponential changes affecting our culture, economy and society; I spoke to entrepreneur, author and thought leader, Peter H. Diamandis – Founder & Executive Chairman of the XPRIZE Foundation, Executive Founder of Singularity University  and Co-Founder of BOLD Capital Partners.  Peter was recently named by Fortune as one of the “World’s 50 Greatest Leaders,” and is one of the world’s foremost experts on technology and change – a topic he covers in his recent book, The Future is Faster Than You Think.

Q:  Do people really understand how fast our world is changing?

[Peter Diamandis]:  I don’t think people understand how fast our world is changing, it’s one of the challenges that really catches people off guard.  We’ve been living through a time of constantly accelerating technological capabilities.  We’re living in a world of increasing, exponentially growing computational power.  Technology is always on, always available, and we’re now moving into the quantum computing era – these exponential technologies are enabling artificial intelligence, robotics, 3D printing, synthetic biology, augmented reality, blockchain and allowing these technologies to converge, creating new business models.

It’s the convergence of these technologies that creates waves on top of waves of capability, which will change our world – every industry, our economy, our government, our health, our families… everything is beginning to change.

People fear what they don’t understand – they fear when they see change, but don’t have a sense of where it’s going – and part of our goal is to give people a vision of the decades ahead, where these technologies are going, and how they are changing our lives.

We’re seeing traditional business models, businesses and industries changing faster and in more substantial ways than ever before.  Transportation, entertainment, education, finance, insurance, healthcare – everything will be transformed in the next 2-10 years.  Let’s look at transport; it took 100 years to go from the horse and cart to the car.  The car really came online with the Ford Model T in 1908, and that transformed how we live, where we live, our work, our cities…. It gave us concrete jungles and now? The automobile, roads and parking lots have become part of the infrastructure of our lives – all this will change again as autonomous vehicles, flying vehicles and hyperloop become reality in the near future.  On top of that, virtual reality may allow us to do what we need to, without moving at all.  Where we live, where we work, how we shop, how we entertain ourselves… all this could change… not in a century, but over the course of single-digit years.

Q:  What is the role of abundance in our future?

[Peter Diamandis]: We’re moving towards a world of increasing abundance.  It hasn’t been that long since cellular phones and Google came along, democratising and demonetising communications and access to knowledge.  The poorest and wealthiest can access the same information because of Google; the same information Larry Page has! That same democratisation and demonetisation will occur in other critically important areas of our life – we’re heading to a world of energy abundance from a world where we used to ravage mountains to get coal and drilled kilometres under the ocean to access oil.  We’re heading towards a world where all our energy is derived from the sun and from renewables, a world where we will have a squanderable abundance of energy.  Coal is around 5-6cents per Kilowatt Hour and, today in Brazil, we’re seeing solar energy at below 2 cents per Kilowatt Hour…. The poorest countries in the world are also the sunniest, which is a powerful asset.  There’s 6,000 times more energy hitting the surface of the Earth than we consume as a species.

Q:  How can we adapt to the rate of change we’re seeing?

[Peter Diamandis]:  As humans, we’ve evolved in a world where the pace of change was slow.  Our brains have 100 billion neurons and 100 trillion synaptic connections that shape everything we know… and this system evolved for a world that changed slowly.  Our minds are not structured for the pace of rapid change that we’re seeing and, increasingly, will experience.  It’s therefore natural that our reaction is fear and a foot on the brake, but the reality is that exponential change doesn’t have a dial that you can slow down.   We need to educate ourselves and have a vision of where things are going.

Within the next 15 years, we may even move towards a nation of meta-intelligence where we merge with technology.  Elon Musk has been working on this in detail through his company Neuralink and is concerned about super-intelligence and how it could merge with AI.  Ray Kurzweil, my partner at Singularity University, has also written about this at length and by his estimate, by 2035, just 15 years from now, we’re going to be able to connect our brains with the cloud.

One way that we deal with the accelerating rate of change is by sort of riding on top of that tsunami of change rather than being crushed by it.

Q:  Will exponential change redefine what it means to be human?

[Peter Diamandis]:  Technology will fundamentally change society and how we view ourselves; this isn’t new, it’s been going on for over a century.  We take our current lives for granted, as being normal, but the way we live today is very different to the world 100, or 1000 years ago – and that change will continue to accelerate.

Just think; our bodies are not just one single individual…. We’re collections of 30-40 trillion cells that work collaboratively to create you or me.  Life began 4 billion years ago on this planet as very simple prokaryotic life forms evolved into more complex individual eukaryotic life forms, multicellular life and then eventually tissues and organs.  Humans have only been here for a short period of time on a cosmic scale, and that evolution and change is continuing.   Part of my goal is to bring these conversations to the forefront – I want people to see where the world is going, to be cognisant of it, excited by it.  We’re heading to a world where we can eliminate disease, increase our intelligence, and access all the food, healthcare, energy and education we could desire…

Q:  Will technology change the nature of citizenry and government/

[Peter Diamandis]:  Our democracies were designed hundreds of years ago, back when we didn’t have communications networks – and messages were sent via people on horses or on foot.  It is perhaps because of this that we developed representative rather than peer democracies.

When it comes to government, it’s important to realise that in most cases change happens by revolution, by movements, rather than small incremental movements – and so we have to understand where these changes are tried and experimented with; perhaps virtual worlds?

We’re on the cusp of becoming a multi-planetary species.  Entrepreneurs like Jeff Bezos and Elon Musk are working to make sure that within the next decade or two, the human race has the potential to move, irreversibly, off our planet.  When we do that? We’ll have the opportunity to try new governance and government systems, and perhaps the very nature of our societal institutions.

Q: How can we be more positive about technological change?

[Peter Diamandis]:  People forget how difficult life used to be… how short life was, how brutish and disease burdened our existence was, and how day-to-day living was just a challenge for basic survival.  For most of human existence, life was about fundamental survival, getting to tomorrow, dealing with finding food, dealing with disease, pestilence, finding shelter, and fighting tribal wars.  That was life not too long ago.

Today? we’re at the precipice of taking a fundamental vacation from survival where instead of worrying about tomorrow, we can decide how to spend our time.  When food, energy, healthcare and education are literally free to everyone, everywhere, what will humanity do with time? What an extraordinary opportunity?

Q:  How do you stay inspired and connected to change?

[Peter Diamandis]:  I remain inspired by looking at, searching for, acknowledging and interpreting the positive news coming out from around the world.   As a species, we’re still governed by our primal reptilian mind which is programmed to sense danger.  That’s why we’re likely to give 10 times more attention to negative news, to bias leaning towards the negative; in the old days, that would have helped us to survive.

Today, there is an extraordinary amount of positive news in the world.  It’s just that people don’t look for it, search for it, acknowledge it, interpret it.  We are seeing extraordinary breakthroughs in how we produce energy, how we fight disease and the ability of technologies to create this world of abundance.

Up Next: Why We Sleep