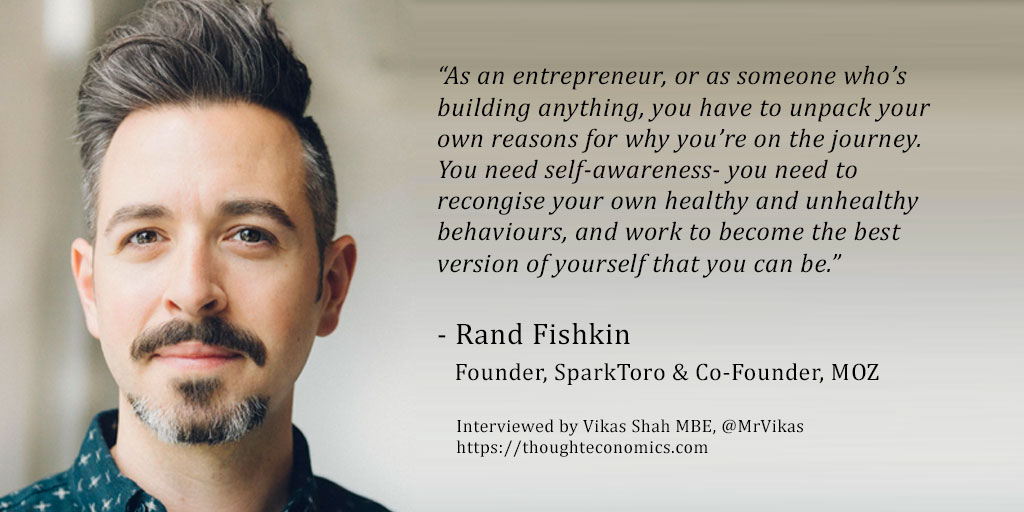 “….everyone knows how a startup story is supposed to go: A young, brilliant entrepreneur has a cool idea, drops out of college, defies the doubters, overcomes all odds, makes billions, and becomes the envy of the technology world….” -Rand Fishkin

Our inability to disconnect extreme events from the norm also affects our perceptions of business.  The picture we see of the business environment shows us the tails not the curve, we here about the super exciting startups, and the gigantic behemoths but we don’t see much about the middle; the small and medium sized businesses who account for the majority.  We don’t see that of the 6 million companies in the US, 90% have less than 20 employees.

Rand Fishkin is the founder of SparkToro and was previously cofounder of Moz and Inbound.org. He’s dedicated his professional life to helping people do better marketing through the Whiteboard Friday video series, his blog, and his book, Lost and Founder: A Painfully Honest Field Guide to the Startup World.

I caught up with Rand to understand more about the realities of starting-up, and what we can learn from the businesses in the middle.

Q:  What are some of the biggest myths you see around startups?

[Rand Fishkin]: One of the biggest myths in startup-land is this idea that the pinnacle of startups is building a venture-scale company, backed by venture capital, growing exceptionally fast and being OK with high failure rates as a result; in other words, returning a significant amount of capital to an investor rather than any other outcome.

We are in a world where startups are prioritising growth over profitability, prioritising being first to market over best in market, and sacrificing humanity, happiness and balance to grow as fast as you can.

We have to look at companies that are not the 1:10000 that become Facebook, Google or Amazon.  These are companies that are rarely covered, poorly understood and somewhat invisible- though they are more common.  There are many more ‘middle of the road’ businesses rather than outliers.

In most areas of life we look at norms, averages and medians- but in the startup space we seem to focus exclusively on outliers.  Don’t misunderstand me, there is a tremendous amount we can learn from these outlier’s success stories- but we have to also look at the success stories that make up the vast majority of business around us.

Q: What are the differences between being a startup CEO and Founder?

[Rand Fishkin]: There’s a beautiful simplicity to your role when you create a company.  You are by nature, the CEO or- if you have Co-Founders, you decide who will be.  The complexity around the CEO role is more around whether you decide to invest in becoming a very traditional CEO or whether you want to break the mould and do it differently.  Either way is the right way!

I hear a lot of this, ‘hey, the founder needs to do all of these things to be a good CEO….’ but the long list of traits and characteristics basically fits you into an archetype- a stereotype.  In truth, CEOs can be as diverse as people are, with strengths, weaknesses and different styles of working.  That’s the beautiful thing about being a Founder & CEO, your life is about choices.  You don’t choose to start a business to maximise your earning potential- most startups fail- if you want to maximise your earnings, go join a big company.

Q:  What is your view on networking as a startup?

[Rand Fishkin]: I’ve seen a lot of investors criticise startups for spending too much time networking or at events- but I’m going to make an observation which I suspect would be unpopular with them.  My guess is that they’re seeing a small number of folks who do that a lot and are getting biased by their own constructs and views, i.e. ‘you’re a startup, you need to raise money, and not go to tons of conferences and events and spend your time networking…’ – but the conflicting advice is this…. You need to network, you have to have a great network to get the job done, and in truth every founder has their own approach to doing this.  Investors often want to follow lines, not dots, and that’s frustrating.

Q:  What is the role of transparency to the founder?

[Rand Fishkin]: Transparency has been wonderful for me as a human being- but it has positive and negative attributes to a business.  If you choose to be transparent, make it a core value- and go whole-hog otherwise, don’t do it…. When someone says they’re very transparent and doesn’t give you the full story, or holds something back – it’s just marketing, it’s not real.  You’re just saying, ‘oh, I’m going to tell you this to make me look good, and then you’ll like me more or think more highly of me…’ – true transparency is different to honesty- it’s not about just saying here are some truths… but here are some uncomfortable truths about what’s going on…. Here are some things that catch my throat as I try to say them…. Here are the things I’m scared someone would find out…..

If you are able to share the things you’re scared people will find out? That’s real transparency, and that’s how you earn the trust that transparency can bring, but if it doesn’t feel uncomfortable, it’s just marketing.

Q:  How do you cope with the pressures of being a founder?

[Rand Fishkin]: Startups and their founders have a relationship much like parents and children, and a lot like romantic relationships between partners.  In order to be a great parent or a great partner, you need to practice self-care, you need to make sure you are your best whole-self physically and emotionally.  When people start sacrificing their own health (mental and physical) to the service of their child, partner or business- things go awry.

There’s a culture in Silicon Valley that believes that you should be obsessive and not be able to think about anything else other than your business.  You shouldn’t have kids… friends… just your company as a vehicle to make millions of dollars.  That’s the kind of founder that many investors want to back, but we need to kick those people out – that’s not how we’re going to make a better world, and it’s not how we build good companies.  It’s one of the main reasons our failure rates are so high.

I think we would have a lot more success stories if we had more happy, well adjusted, well balanced, emotionally healthy founders

Q: What would be your advice to the next generation of founders?

[Rand Fishkin]: When you’re starting out, your ambition shouldn’t be defined by someone else’s success criteria.  That’s something I struggled with, and still do.  I struggle to align my business objectives with my life and my own motivations rather than externally formed motivations that come from culture and society- and the wider views in our world around wealth and entrepreneurship.

As an entrepreneur, or as someone who’s building anything, you have to unpack your own reasons for why you’re on the journey.  You need self-awareness- you need to recongise your own healthy and unhealthy behaviours, and work to become the best version of yourself that you can be.

Another hugely common mistake is optimising your business for investors, and not customers and employees.  It’s hard not to do, because when you’re raising money your investors will say, ‘well, we want to see XYZ and without that we may not be interested…’ – but remember, they’re not customers, and they can’t get into your customers heads the way you can.  If you don’t believe me, look at the fact that consulting businesses have a 5 year survival rate of 60% and venture backed businesses, less than 10%.

Rand dropped out of the University of Washington in 2000 to work full-time at his mother’s small business marketing firm as a web designer. In 2004, he created the SEOmoz blog, which, over the next decade, became the world’s most popular community and content resource for search marketers. In 2007, Rand became CEO of SEOmoz, Inc (now called Moz), the software company he co-founded with his mom based on the blog’s success. That same year, he proposed to his longtime girlfriend, Geraldine DeRuiter, with a TV commercial that received widespread publicity (and, later, an awkward appearance on the Oprah Winfrey show). The two married in 2008 in a move Rand consistently refers to as the best, luckiest one of his life. Over 7 years as CEO, Rand grew Moz from 7 employees to 134, revenues from $800K to $29.3mm, and traffic from 1 to 30mm annual visitors. He raised two rounds of funding ($1.1mm in 2007 and $18.1mm in 2012), led three acquisitions, and, in 2013, re-branded the company from SEOmoz to Moz, shifting focus from exclusively SEO tools to broader web marketing software. Rand stepped down as CEO in February of 2014 during a rough bout with depression and left the company 4 years later. He remains chairman of Moz’s board. Rand is also the co-founder of Inbound.org, a site to dedicated to sharing articles about marketing from across the web, alongside Dharmesh Shah. The site was sold (for no profit) to Hubspot in 2014. Rand may be best known for his popular blogs and regular Whiteboard Friday series, watched by tens of thousands of marketers each week. Rand is also a frequent keynote speaker at marketing conferences around the world, averaging ~100 days on the road each year and 30-40 speaking appearances. He has, much to his own surprise, amassed a large following on Twitter, Pocket, Facebook, and Slideshare. In 2018, Rand founded SparkToro (an under-development software company focused on audience and influencer intelligence) and published, with Penguin/Random House, Lost and Founder: A Painfully Honest Field Guide to the Startup World. Rand previously co-contributed to two books: Art of SEO, and Inbound Marketing & SEO. He’s been profiled in the Seattle Times, featured in Puget Sound Business Journal’s 40 Under 40, named to BusinessWeek’s 30 Under 30, written about in Newsweek, The Next Web, the Inc 500(to which Moz was named 5 years in a row), and hundreds of other publications. He is, however, most proud of his prominent appearances in Geraldine’s first book, All Over the Place. Geraldine and Rand are also teeny, tiny investors in Techstars Seattle and Backstage Capital.

Up Next: The Future of Space Exploration