Close Search ×
Order the Book Subscribe Free
A Conversation with Nintendo’s Former President and COO, Reggie Fils-Aimé on Disrupting the Game & What it Takes to Succeed. 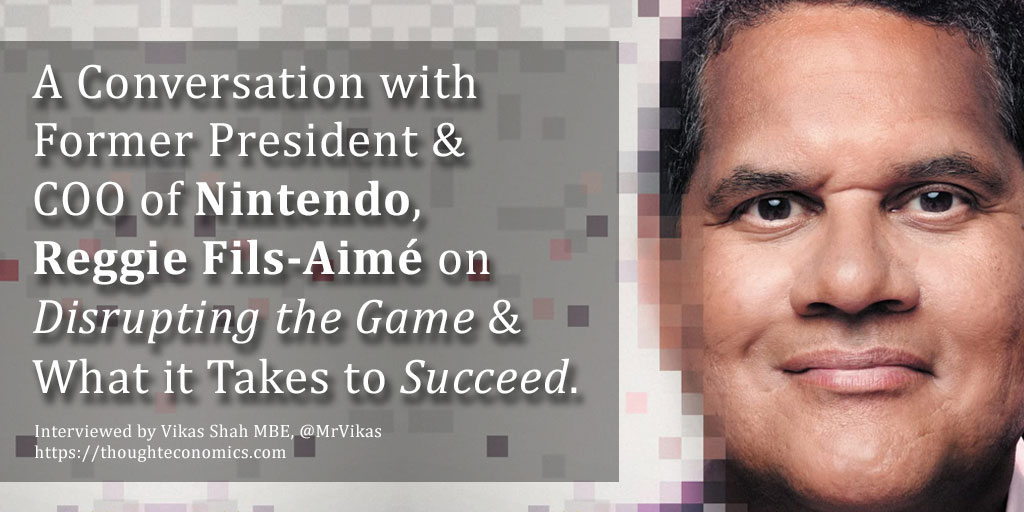 Reggie Fils-Aimé is a gaming legend. He was President & COO of Nintendo of America Inc, and from his humble childhood as the son of Haitian immigrants fleeing a dictatorship, he rose to become one of the most powerful names in the history of the gaming industry. In this capacity, he helped bring the Nintendo DS, the Wii, the Nintendo 3DS, the Wii U and the Nintendo Switch to the global marketplace. He retired in April 2019 and in October 2019 was inducted into the International Video Game Hall of Fame.

In his new book Disrupting the Game: From the Bronx to the Top of Nintendo, Reggie tells the incredible story of his unlikely rise to the top, and shares his gameplan and leadership lessons for anyone looking to beat the odds and achieve success.

In this interview, I speak to Reggie Fils-Aimé about leading successful innovation and culture. We talk about what it takes to succeed, grit, perseverance, and why relentless curiosity, taking risks, and the ability to challenge the status quo really matter.

Q: Why has gaming grown so rapidly as an industry?

[Reggie Fils-Aimé]: When I started in gaming, in 2003, only 1 in every 3 adults in the United States played video games. Today, it’s close to 8 in 10 adults, and it’s a $200billion business. I’m proud of the role Nintendo has played in driving this, and accessibility has been a key factor. People can pick up a controller and enjoy a game. 20 years ago, you needed a working knowledge of computing, it was a laborious and insular activity. Today, storytelling in games also rivals any other form of entertainment. Games like The Last of Us on PlayStation are like a novel. It’s that quality of storytelling. The technological change in gaming has been profound too – the fidelity of graphics, the power of multiplayer and connectivity, it’s turned gaming into a juggernaut and by far, it has become the largest form of entertainment out there today.

[Reggie Fils-Aimé]: Innovation is a skill, a teachable skill, just like management. If you focus on a handful of key principles, you can effectively drive innovation in any type of business.

I started my career in consumer-packaged goods with Procter & Gamble (P&G). That company had a very innovative, principle-based, process for bringing out new products. First, you need clarity of vision about what you’re trying to do. Where are you looking to drive innovation? You must be crystal clear throughout the entire organisation. Innovative companies also have a culture that supports innovation, doing things differently, and pushing the envelope in all parts of the business. Innovative companies are not afraid of failure – they’re willing to take risks, fail forward, learn from missteps, pivot, and keep going.

I’ll give you a specific example from my own career. Nintendo was highly successful with a gaming console called the Wii. We sold over 100 million devices and a billion games. It was followed by a product called the Wii U. It didn’t have anywhere near the same level of success- in fact, it was the second worst-selling platform in Nintendo’s history. The company was able to see the elements that didn’t work, the elements that did work, and they created the Nintendo Switch. That is now the best-selling console Nintendo has ever had. This ability to quickly learn, pivot, and reapply some key elements in that innovation, that’s another hallmark of what I would identify as highly innovative companies and businesses.

Innovation is a team sport, and during my 16 years at Nintendo, I had great collaborators to work with and drive innovation. Satoru Iwata, who was the Global President of Nintendo for a decade, and Shigeru Miyamoto, the creator of Mario, Donkey Kong and Zelda. So many individuals came together to identify areas where the company wanted to drive innovation, drive big bets. These partners had the mentality of running toward risk and accepting risk rather than being paralysed by it. I was able to focus on consumer-led ideas which I thought would motivate the player- and- Nintendo’s community. As a leader, I believe you must have your hand on the pulse of popular culture, and the culture of your organisation, and you must know how to push ideas forward and take risks.

Q: What has been the role of grit & determination in your journey?

[Reggie Fils-Aimé]: My maternal grandfather was exiled from Haiti where he- and my parents- are from. He was the Secretary of Health and education when Haiti was a democratic republic. As it transitioned to the brutal dictatorship under Francois Duvalier, my grandfather remained outspoken, highlighting the cruelty being inflicted on the Haitian population. He took that message to the United Nations and was warned that if he made that journey, and spoke of the atrocities, the lives of him and his family would be in peril. He had the grit and determination to go, to tell that story, and to tell the world what was happening. His experience shaped me – and shaped my own mentality of being tough, resilient, picking myself up from disappointments, and continuing to move forward. We cannot be paralysed with disappointment when things don’t go the way we want.

As individuals, we all go through our own personal journeys, and we need to decide how we live our lives. Early on, I decided that I was going to take charge of my life. I was going to drive the decisions.

I decided to attend Cornell University and made myself a promise that I’d figure out how to pay for it. I focused on finance and banking, and had some internships, but decided to take a risk- pivoting to join Procter & Gamble’s brand management program. You have to make decisions throughout your life and be prepared to accept responsibility for those decisions. There is also confidence that comes from learning a set of skills – and that confidence allows you to challenge the status quo, push back on people who may not be supporters, and really drive your own agenda in a positive way. You can’t be a bull in a China shop, you have to enrol others in your ideas to push them forward.

Q: How do you deal with impostor syndrome as you are climbing your career?

[Reggie Fils-Aimé]: As I progressed in my career, there were always moments where I asked myself whether I was good enough for that next challenge. When I joined Procter & Gamble  as a 22-year-old, I was working alongside people in their late twenties and early thirties doing the same job as me. I was often the youngest person in the room, and typically the only brown face in the room. I had to constantly challenge myself to make sure I believed that I deserved to be in the conversation. This faced me at every step of my career- I tended to be young for the role- I tended to be the only minority. I took the fact that I felt I wasn’t good enough as a challenge. This is where I give some of my early bosses and mentors a lot of credit. They invested their time in my training and development and encouraged me to take courses, and grow my expertise. I would encourage other young executives to do the same – be a sponge – learn as much as you can – look outside your organisation for mentors, and opportunities to learn, and keep applying your learnings.

Even today, serving on corporate boards, I tend to be the youngest one in the room, and very close to the lone minority.  So that challenge of having confidence and having a belief that you belong in the room to a certain extent continues today.

[Reggie Fils-Aimé]: Legacy is absolutely something that drives me.

I thought deeply about my legacy at Nintendo and thought hard about how I wanted to leave the company. When I joined Nintendo in 2003, much of the early leadership at Nintendo of America had retired, and there was a leadership gap. The business was in difficulty- partly because of an ineffective hand-off of key leadership roles. I saw, with my own eyes, what happens when retirement and leadership change aren’t managed effectively. It can have deep ramifications on the business. The other element of legacy that I saw at Nintendo was when my dear friend Satoru Iwata passed away in 2015. He was the Global President of Nintendo- a brilliant games developer who led the company through the launches of the Wii and the Nintendo DS. In his passing, I saw how Nintendo struggled. I vowed that when I retired from Nintendo, we would have an effective, healthy transition. I chose to retire in 2019, with the Nintendo Switch being out in the marketplace. When I retired, we promoted several executives who were able to continue driving the business and culture. I also thought about legacy in terms of how I want to impact the next generation of business leaders, and that’s why I wrote the book. It’s also the reason I serve on corporate boards, spend time at several colleges and universities, and why I do significant public speaking. My legacy now is to pass on my experience and share my lessons with the next generation so they can be effective on their own journey.

I take it seriously that my role now is to talk with young people and encourage them that they can do what I’ve done. I continue to go back to that same economically depressed neighbourhood that I grew up in, in the Bronx. I tell these people that I was them, 60 years ago, and they can be me as they continue their journey. I hope to continue shining that path and encouraging others as they pursue their own dreams.

Up Next: A Conversation with Emily Eavis, Co-Organiser of the Glastonbury Festival