Close Search ×
Order the Book Subscribe Free
A Conversation with Richard E. Grant on finding A Pocketful of Happiness. 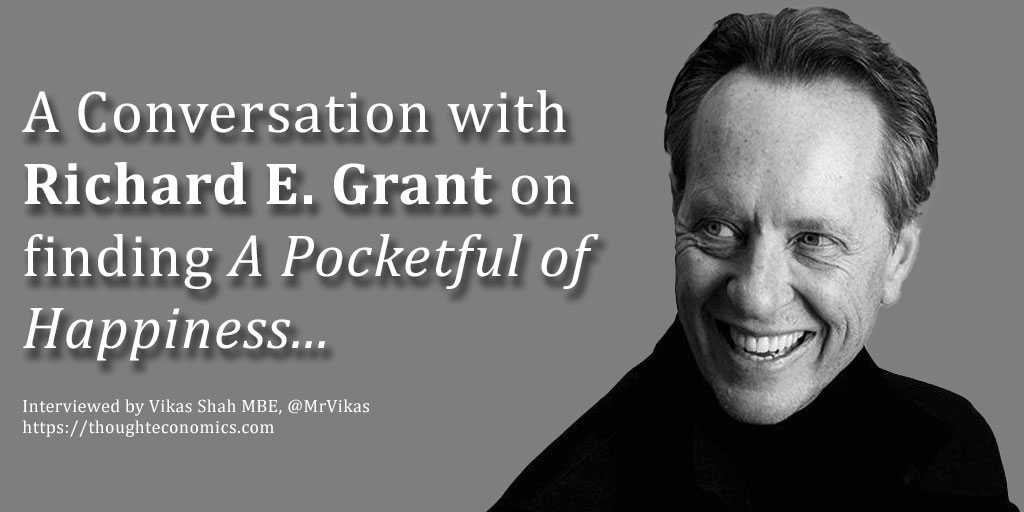 Richard E. Grant emigrated from Swaziland to London in 1982, with dreams of making it as an actor, when he unexpectedly met and fell in love with renowned dialect coach Joan Washington. Their relationship and marriage, navigating the highs and lows of Hollywood, parenthood and loss, lasted almost forty years. When Joan died in 2021, her final challenge to him was to find ‘a pocketful of happiness in every day’.

His honest (and frequently hilarious) memoir is written in honour of that challenge –  Richard has faithfully kept a diary since childhood, and in these entries he shares in raw detail everything he has experienced : both the pain of losing his beloved wife, and the excitement of their life together, from the role that transformed his life overnight in Withnail & I to his thrilling Oscar nomination thirty years later for Can You Ever Forgive Me?

In this interview, I speak to Richard E. Grant on finding happiness, companionship, joy, and how we can all find that Pocketful of Happiness.

Q: What has a life on screen taught you about happiness?

[Richard E. Grant] Happiness is something that the majority of screen characters I’ve played, don’t have, and as I was born with a positive -glass three quarters full- attitude to Life, it’s always challenging and interesting to discover the source of a character’s unhappiness.

I think it’s entirely to do with how you react to trauma and upheaval that defines what kind of personality you are. When playing a tortured personality on screen, it’s a relief to be able to shed all of the character’s problems and issues at the end of your filming day.

Q: What is the role of love, of companionship in life?

[Richard E. Grant] I began a conversation with my future wife in January 1983 and 38 years later, that conversation ended when she drew her last breath at 7.30 in the evening on the 2nd of September 2021. To be truly and completely seen, understood and loved by another Human Being, was her greatest gift to me. We had no secrets, were faithful to one another and had a profound connection, the like of which I’d never thought possible, until I met her.

Q: How do we cope with impending loss?

[Richard E. Grant] From the moment she was diagnosed with stage four terminal cancer, I determined to make the very best of the time that we had left together. We were told that she had 12 to 18 months at best. After taking a new American drug, meant to keep her alive longer, it stopped working after three months, so we knew that we only had a few months left together. Enabling us to say everything we wanted to, to one another. Her sanguine, clear sighted and accepting attitude was the guide to navigate our way forwards.

Q: What does grief do to us, for us, and how did you cope?

[Richard E. Grant] Four days before she died, she challenged my daughter and I to try and find a pocketful of happiness in each day, which has become the mantra by which we navigate the abyss of grief, following her death. I don’t think you ever get over grief, you just have to find a way to accommodate and travel around it. Whilst rationally understanding that she is dead, emotionally it’s impossible to properly comprehend. Talking about her with friends, keeps her spirit alive and after 38 years together, I know what her reaction would have been to anything I’m experiencing without her.

Q: How can we find happiness after grief?

[Richard E. Grant] Built into her edict, is not to feel any guilt if you find happiness or joy after her death. That is an extraordinarily generous piece of advice. I find that running four miles every morning, is a great endorphin release and sets me up for the day. Exactly as she challenged me to be.

Q: Has experiencing loss changed your view on the meaning, purpose and preciousness of life?

[Richard E. Grant] My father died of the same disease at the age of 53. I was 24 and determined to make the very best of my Life, knowing all too acutely how unpredictable and finite Life can be. Every year I’ve outlived him, feels like a bonus. My wife quipped that we’re all going to die and it just happened to be her turn. Her pragmatic and humorous attitude was a guide as to how to accept what is unchangeable and inevitable.

Q: Has loss changed your views on death?

[Richard E. Grant] I’ve always believed that secrets are toxic, and likewise, feel that the best way to deal with death is to be transparent and open about it. Having months or weeks to share the news with our friends, enabling them to have time to express their love and appreciation, is a gift in itself and we embraced that as fully as possible. So that by the final week of her life, she said that she had seen everyone she wanted to, and more than anything, wanted to be given permission to die.

Q: What can we learn from your life?

[Richard E. Grant] Despite every adversity, never give up on your dreams. I am living proof that having been born and brought up in the smallest country in the Southern Hemisphere, it is possible to fulfil your ambition and succeed despite seemingly insurmountable odds.

[Richard E. Grant] To have briefly entertained people with my work, but more importantly to have been a loving and loyal husband and devoted father to our beloved daughter.

Up Next: Are We Alone in the Universe